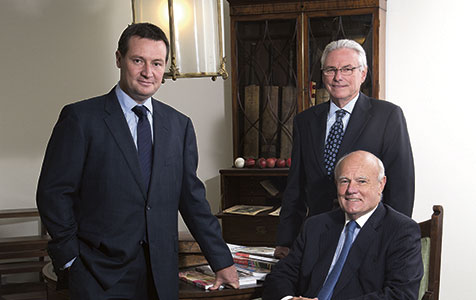 When the Holmes a Court family company Heytesbury Holdings decided to sell its insurance subsidiary, Branton, to global firm Jardine, it sparked upheaval in the business.

Ron Fuller, Ted Hicks and Ian Winter were among several senior staff to walk out the door to set up a new independent firm, in 1993.

Twenty years on, they are still directors at Strathearn, which has become a major player among specialist corporate broking firms.

“Now we service $120 billion of assets globally on behalf of our clients, and we have a premium pool fast approaching $200 million in revenue.”

The founders believe the business philosophy they established at the outset has served the firm well.

“The principles of our business actually transact the business and advise the clients,” Mr Fuller said.

“That philosophy we applied at the beginning we still apply today.”

Strathearn has also built an interstate presence, with its first move being the opening of a Brisbane office 15 years ago, followed by Sydney and Adelaide.

Chief executive Paul Harvey joined in Brisbane nine years ago, and since then the office has grown to have 25 employees and acts for some of Queensland largest companies.

Mr Hicks acknowledges that building a presence in Sydney has been difficult, with the complexities and competitiveness in that market far greater than in Western Australia.

“It’s been a bit of a struggle for us, it’s not been an easy task,” Mr Hicks said.

The group nationally is constantly on the lookout for good brokers, which are the key to the firm’s growth strategies.

“When we see good people, we pursue them,” Mr Hicks said.

One of the lures Strathearn is able to offer high-performance staff is the opportunity to become owners of the business; currently 18 shareholders work within the firm.

In addition, ASX-listed company Austbrokers is a major shareholder after buying 49.9 per cent of the business in 2007.

Mr Hicks said the group remained focused on keeping the flexibility and personal touch that came from local control.

“We’re all refugees from international insurance brokers,” he said.

“We don’t have a regimented organisation; retaining that flexibility remains constant in our minds and in the future.”

One change that the founders of the business have been working on is that of leadership succession.

With Mr Harvey well established as chief executive, the founders are gradually winding down their involvement in the business.

“There’s a wealth of knowledge and experience there which we as a younger team need to capitalise on,” he said.

Another major change under consideration is an acquisition or partnership to lift Strathearn’s international presence.

“Currently the principal way we meet that challenge, we actually go with our clients, wherever it may be, and we deal with the local issues.

“To help us with that, we transact into the international insurance market through wholesale brokers and we use their buying power and knowledge.”

This strategy has led to Strathearn doing business in more than 50 countries around the world, including 20 countries in Africa.

Mr Fuller said the firm was looking at ways of getting better coverage.

“Our plan is to try and get better access globally,” he said.

“The reality is there are only four, maybe five truly global brokers; they are all in Australia, they are our direct competition.

“We have to demonstrate we can do the same job, and do it better.”

Mr Fuller said Strathearn has previously looked at joining various groups around the globe, but “they haven’t been that successful”.

“The intent is to widen our tentacles, and that might be through acquisition or partnership,” he said.

“I would certainly say that we are opportunists and if there is a like-minded business on the market that can add to our global reach we would certainly entertain a discussion,” he told Business News.

Mr Harvey believes one of Strathearn’s main strengths is the depth of expertise in the firm.

“Our clients are looking for more than insurance. We have five full time lawyers, an engineering team, economists and actuarial staff,” Mr Harvey said.

“There are very few brokers with such a broad service offering.

“In my view, having that skill set in house allows us to offer something very different from our competitors.”

Strathearn’s client base in the mining sector has always been a bonus – the firm acts for about 350 ASX-listed companies, including 300 mining and exploration companies.

Mr Harvey said clients in the mining sector accounted for 18 per cent of the business globally, with construction, agriculture, engineering, political risks, food and beverage, surety bonding also being important.

Mr Hicks said the firm’s legacy would be the people it had engaged to carry the business forward.

“That’s the younger shareholders and partners,” he said.

“The culture may be changing, but we’re conscious of that, we make certain we don’t lose sight of the principles that built this business.”