Strategy aims to guide the Guides 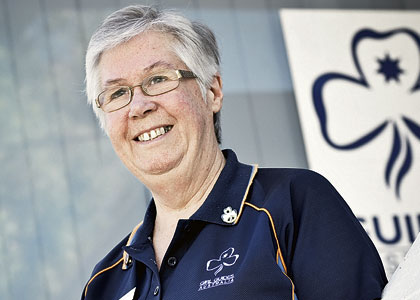 ROLES TO FILL: Brenda Hamlett is working to establish a strong direction for the Girl Guides. Photo: Grant Currall

WHEN Brenda Hamlett started out as a Brownie, aged seven, the Girl Guide experience consisted of weekly visits to her local club and the occasional region-wide jamboree.

A lot has changed since then.

Ms Hamlett is now the state commissioner for the WA Girl Guide branch, a role in which she helps oversee connections between clubs in Western Australia and those in other states and around the world (via the internet).

But while the organisation has adapted to the changing society, it faces challenges on several fronts, including, ironically, guidance on a local level.

“The world has changed, Guiding isn’t the only thing that girls can do anymore. When I was growing up it was Guides or church, youth clubs. Now people are doing ballet on Monday, netball on Tuesday, Guides on Wednesday, music practice on Thursday, they have so much on their plate,” Ms Hamlett said.

“To be honest, some of them have too much on their plate, and if it is Guides they drop it is unfortunate, but I think it is healthier for the kids in some ways.

“The central part of the program is that the girls choose what they want to do. I don’t think the program itself is irrelevant, it may be that we need to reinforce to people that we are flexible, the image that is out there doesn’t necessarily reflect what is happening in the units.”

Girl Guides WA currently has 2,600 members, a number that has been steady for the past two years after falling for some time.

Ms Hamlett said the main issue wasn’t relevancy or even competition from other organisations, but the lack of available leaders to teach the girls.

“We have waiting lists in most regions for girls to join, but we don’t have the leaders to run the units,” she said.

It is a problem that has, in part, driven the organisation’s strategic plan for the past three years; a large component of the drive to increase leader numbers has been to develop its ‘program management’ style; or in other words, relaxing the time expectations placed on leaders by increasing flexibility in how a unit is run.

“We are working on a broader range of leadership opportunities at the moment, it is not, ‘you have to be there at 4:30 every single week’, it is about sharing that load around,” Ms Hamlett said.

“We are looking at options for people who want to help, but don’t necessarily want to be a leader ... it is sharing some of those responsibilities that don’t require you to work with children and take the pressure off.”

The strategic plan for 2009-12 laid down the gauntlet for Girl Guides with challenging ‘priority actions’ to reinvigorate the organisation’s brand, redesign the program experience, improve the unification of the national organisation, and increase the sustainability of Girl Guides – all on top of increasing leadership numbers.

The next three-year strategic plan for the Asia Pacific region of Girl Guides is currently being set, and Ms Hamlett said while new items would be added to the agenda for the coming plan, it was likely a lot of the goals would continue on from the previous plan.

Ms Hamlett was appointed to the voluntary role of state commissioner last July for a period of three years; her ultimate goal is for the organisation to have a sturdy administrative arm that allows Girl Guides to run smoothly, without a hands-on commissioner.