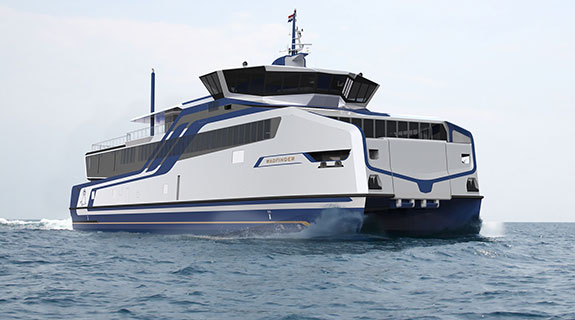 The ferries are designed to carry up to 600 passengers and 64 cars.

The two vessels will be built at Strategic’s Vietnam yard.

The new contract will lift Strategic’s order book to about $US100 million, according to financial statements released by its Singapore-based parent company Triyards Holdings.

In a recent investor presentation, Triyards said Strategic accounted for 10 per cent of its order book, which totalled $US513 million at the end of February.

The new $US50 million contract is for two RoPax ferries with a single-fuel LNG propulsion system, which the company said offered efficiency and environmental advantages over dual-fuel engines.

The ferries are designed to carry up to 600 passengers and 64 cars.

Strategic chief executive Mark Schiller said LNG was emerging as the fuel of choice for vessels and ferries.

“Our focus on the large ferry market is beginning to reap the desired results with this recent win, as we continue to focus on the vertical product chain for aluminium vessels,” Mr Schiller said.

Triyards paid $23.3 million in cash in 2014 to acquire Strategic’s major assets, including its brand, intellectual property and shipbuilding yards in Vietnam and Singapore.

The change of ownership blended Strategic’s experience in shipbuilding and fabrication with Triyard’s offshore vessel fabrication and engineering services.

The business continues to be led by its long-running directors, including Mr Schiller and chairman Mark Newbold, who oversaw the evolution of Geraldton Boat Builders into Strategic Marine in 2001.

The original directors continue to work from Henderson, where they have retained their management, design and sales teams.

They have also retained private ownership of a small yard at Henderson for servicing and maintenance work, but all new vessels are built at either Vietnam or Singapore.

Strategic Marine was a winner of a Business News Rising Stars award in 2008.

Nominations for the 2016 awards, for fast-growing companies, are now open.