SPECIAL REPORT: Chris Ellison’s astute commercial achievements placed him at the top of our short list of nine people contending to be person of the year. 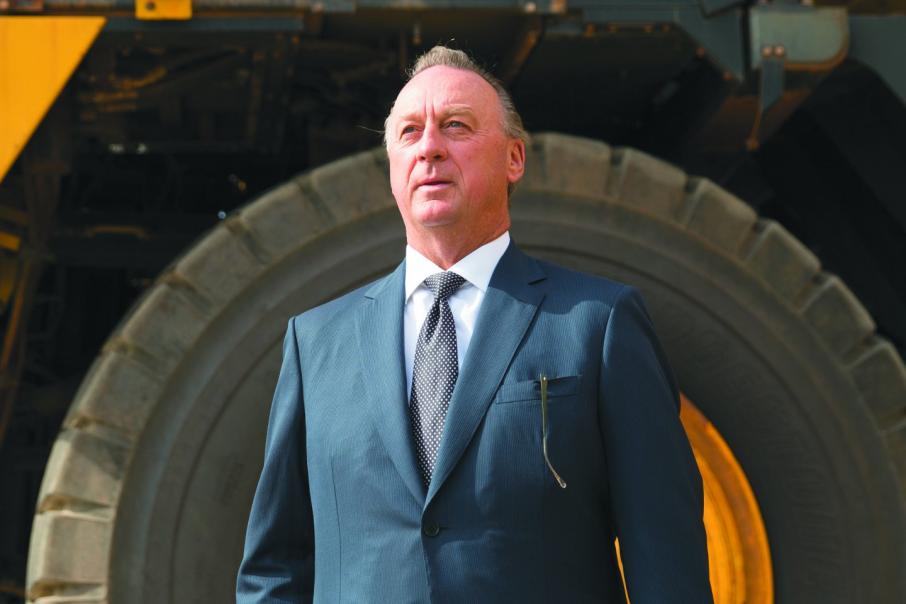 Which individuals left an indelible mark on 2017?

If we cast our net globally, we might select someone like Elon Musk, whose advocacy for electric cars and battery power storage did more than any other to drive Western Australia’s current lithium boom.

This is the latest example of how WA’s fortunes are generally determined by people and events overseas.

The relevant question, then, is which Western Australian did best at seizing the opportunities flowing from this, or any other, global trend?

The answer for 2017 is Chris Ellison.

The Mineral Resources boss came into the year as one of the state’s wealthiest people, after a decade of success during the mining construction boom.

Like many others, his contracting and mining business was adversely affected by the downturn of recent years, but he always retained the capacity to pursue opportunities.

Mr Ellison’s biggest achievement during 2017 was tilting the business toward lithium, through its part-owned Mt Marion project and its wholly owned Wodgina project, where MinRes is pursuing an aggressive ramp-up in production.

In both cases, Mr Ellison – renowned as a tough dealmaker – seized opportunities to gain control of strategic assets without having to pay top dollar.

He is looking to do the same in energy, having already used the company’s status as a secured creditor of struggling Empire Oil & Gas to cheaply gain control of Red Gully gas project.

A $480 million scrip bid for listed company AWE – half-owner and operator of the large Waitsia gas field, two hours north of Perth – is the latest ambitious move, and one that caught the market by surprise.

Coming after some contentious claims about the company’s other operations, and after big share sales by Mr Ellison and fellow director Peter Wade, the MinRes managing director hosted an investor briefing last week to clarify his strategy.

He used the briefing to sketch out ambitious plans for further growth, with the gas assets a crucial part of his long-term growth aspirations.

“We’re going to keep on growing the business as we always have,” Mr Ellison said.

His short-term growth projects include building three downstream processing plants at a cost of more than $600 million, starting with a lithium-concentrate plant at its existing Wodgina mine.

He intends to follow that with a lithium carbonate plant at the same location, and a synthetic graphite plant using the Hazer technology.

“When I’ve finished building these three plants in two and a half years from now, I hope there is another downstream plant sitting behind that,” he said.

Mr Ellison wants to secure control of the Waitsia gas field so it has an assured energy supply for its other operations, and for some of its mining customers.

“I need to get them onto clean energy and I need a long-term, 20-year horizon fixed cost,” he said.

“This asset would form a major pillar of our business and give us a lot of growth opportunities over 25 years.”

It’s not just the downstream processing plants he wants to power with gas.

He also has ambitions to build a lightweight rail link capable of transporting 50 million tonnes of iron ore every year to Port Hedland, and establish a wholly owned port facility.

The company’s growth has delivered big rewards for Mr Ellison and his fellow shareholders, with the MinRes share price hitting an all-time high in recent weeks.

Mr Ellison sold some of his shares near the peak, raising $36 million.

He felt compelled to defend the sale, saying that, as a director, there was a very short window when he was able to trade the stock.

He insisted the share sale had no connection to the subsequent AWE bid announcement, which triggered a slump in the company’s share price.

“I didn’t sell the shares because I thought they were at the top of the market,” Mr Ellison said.

“I sold the shares because my wife, Tia, and I, we support a range of causes and issues.”

He added that he did not need to sell the shares to pay a tax bill, nor did he have plans to buy another house, after famously paying $57.5 million for a property in Mosman Park in 2009.

Mr Ellison reaffirmed his long-term commitment to MinRes, evidenced by his continued holding that is worth about $400 million.

“I have a lot of shares in Min; I started the business from day one and I am totally committed to it,” he said. 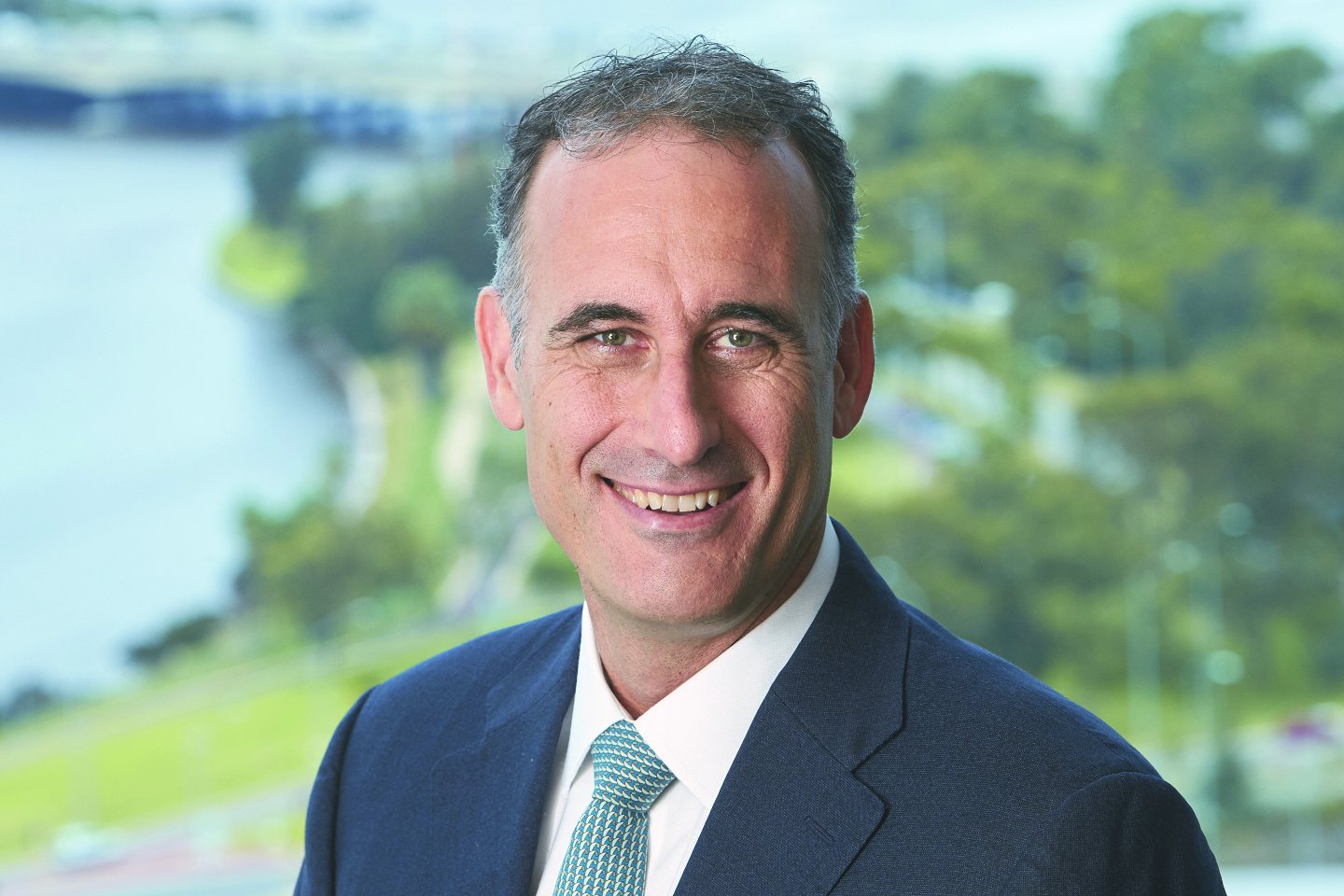 Rob Scott’s selection as Wesfarmers managing director makes him one of the country’s most important business leaders. Photo: Wesfarmers

He now heads a company that is Australia’s largest private sector employer, and has the capacity and track record of making transformational deals.

Elizabeth Gaines became one of the most powerful women in Australian business when she was selected as the incoming managing director of Fortescue Metals Group.

It’s extremely rare for a woman to lead a top 50 ASX-listed company, especially one in the male-dominated world of mining.

She will join Cynthia Carroll, who formerly headed Anglo American, as the only woman to have run a globally significant listed mining company.

The appointment of Julie Shuttleworth as Fortescue’s deputy chief executive adds to the significance of Ms Gaines’ appointment.

Ms Gaines’ path to the top job at Fortescue has been unusual.

Previous roles include being chief executive of ASX-listed travel group Helloworld and the Holmes a Court family’s private company, Heytesbury.

She and Ms Shuttleworth will work closely with Fortescue’s chairman and major shareholder, Andrew Forrest, who continued to surprise in 2017.

Mr Forrest is renowned for his philanthropic activities and set a new benchmark early in the year when he and his wife, Nicola, pledged $400 million for cancer research, early childhood education and other initiatives.

This constituted the largest philanthropic donation by any living Australian.

He also threw himself into the fight to save the Western Force rugby franchise, and has pledged to back a new rugby competition. 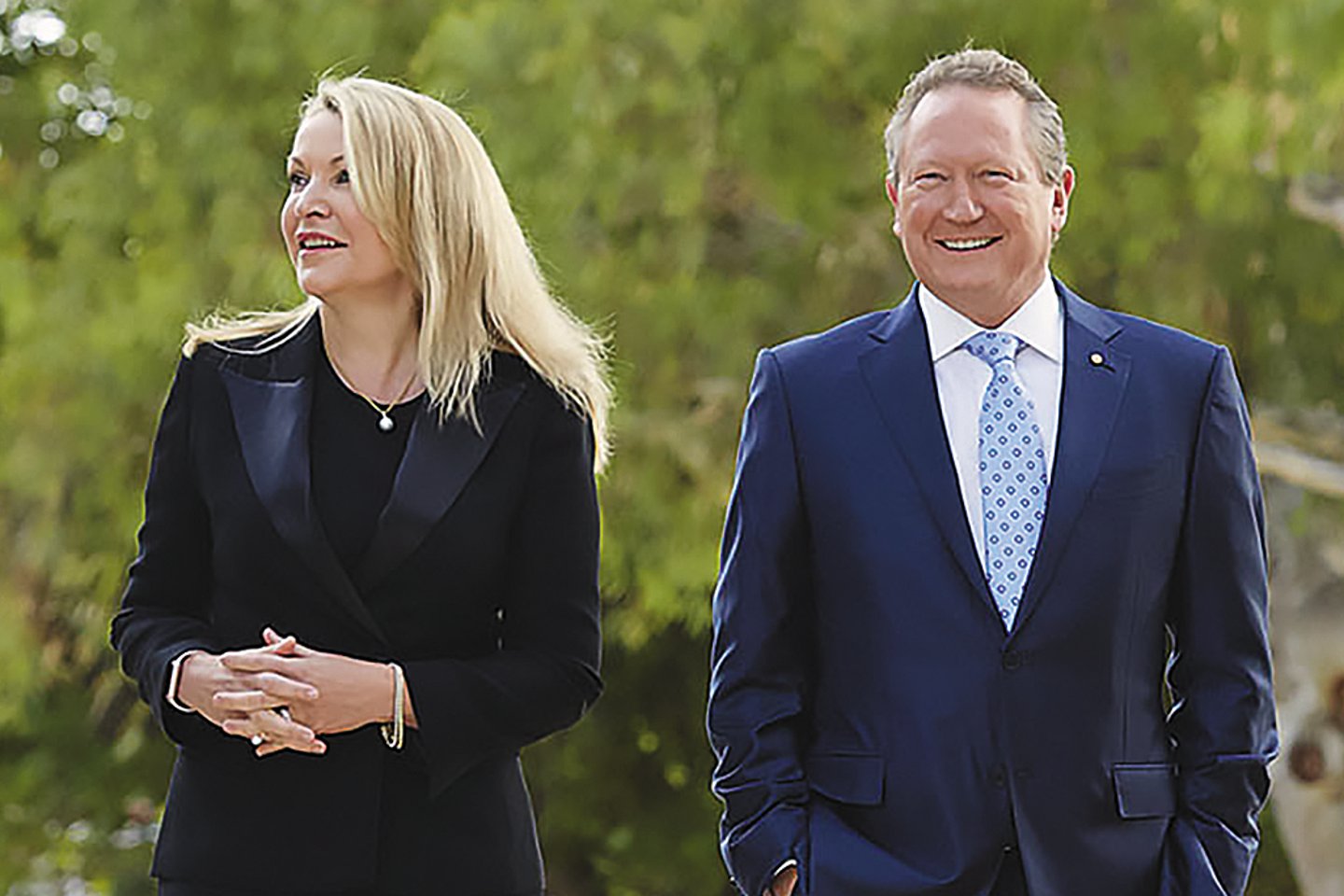 Andrew Forrest continued to surprise in 2017 with his activities in sport, philanthropy and business; the appointment of Elizabeth Gaines as Fortescue Metals Group’s next managing director broke new ground for a big listed mining company in Australia. Photo: FMG

Jemma Green rose to prominence in 2017 for her achievements in two very different fields.

The former investment banker is the founding chair of unlisted company Power Ledger, which made Australian history when it raised $34 million through an ‘initial coin offering’.

Essentially it sold tokens using blockchain technology, which will be used to facilitate trading of surplus solar energy by households and businesses.

In contrast to the speculative frenzy surrounding bitcoin, Power Ledger is a good example of how blockchain technology can be used in a constructive manner.

Completion of the Power Ledger ICO coincided with Ms Green’s surprise selection as deputy lord mayor of the City of Perth.

It wasn’t a position she sought out, which helps explain why other elected councillors on the divided council turned to her to effectively become acting lord mayor while incumbent Lisa Scaffidi continues her legal battles.

Nine months after the election of a new state government, it has become increasingly clear where power and influence resides.

Outside of Premier Mark McGowan’s office, ministers Ben Wyatt and Rita Saffioti have been setting the policy agenda.

Mr Wyatt is Australia’s first Aboriginal treasurer, and in that capacity has inherited a dire financial position.

He also holds the challenging energy portfolio, where his notable initiatives include effectively privatising Synergy’s renewables portfolio – quite a feat after Labor’s opposition to privatising Western Power was a key election pledge. 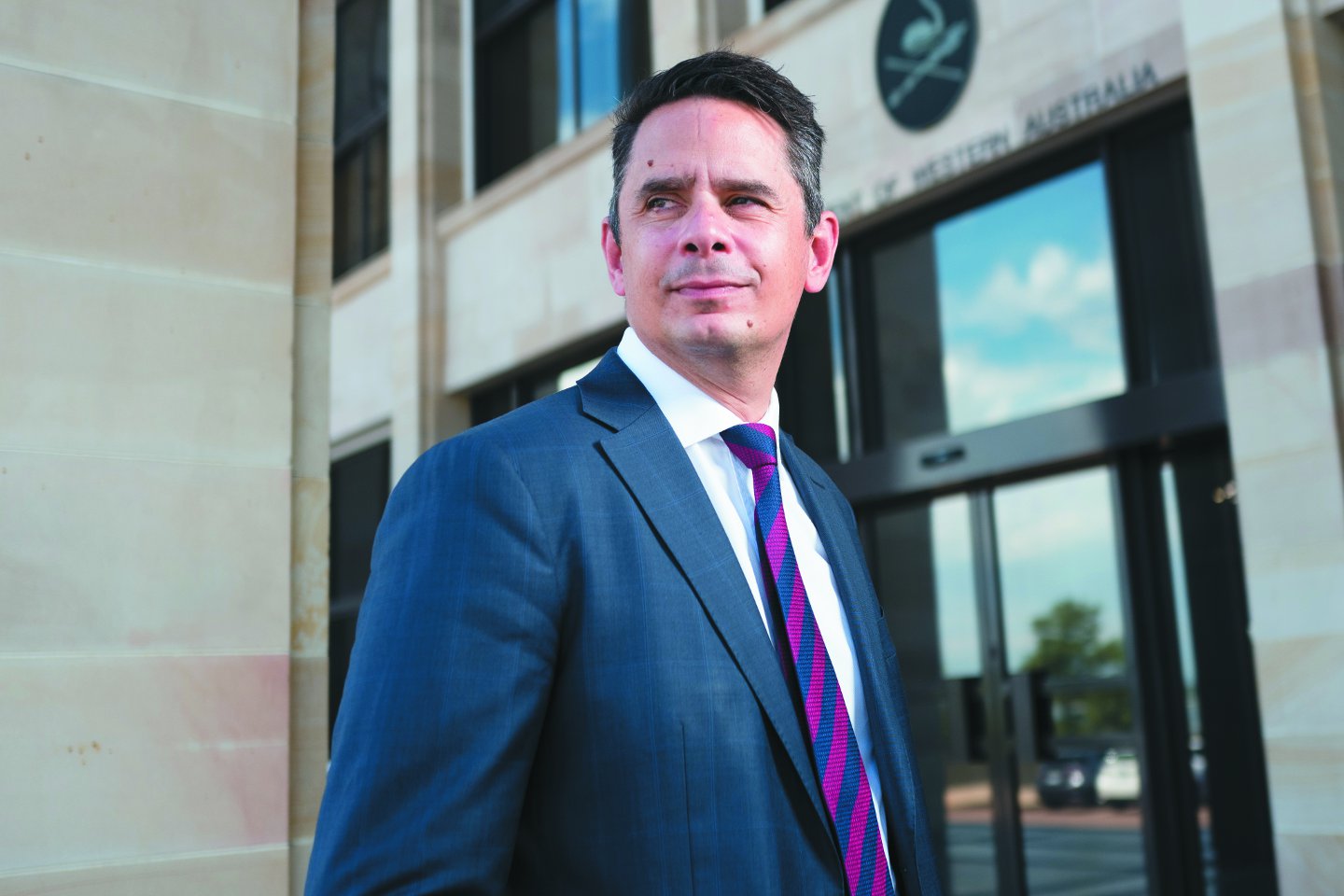 Ben Wyatt made history as the first Aboriginal treasurer in Australia, and is one of the key decision makers in the state government. Photo: Attila Csaszar

In the federal sphere, Senator Dean Smith had a major impact on debates about the GST reform and same sex marriage.

Senator Smith told Business News he believed it was important to find a voice and stick to your judgement even when others disagreed.

“Arguing for and championing the Productivity Commission inquiry on the GST… was not a popular position to start with.

“I made a judgement call that it was not just important but becoming the critical issue for WA.”

Treasurer Scott Morrison ordered the inquiry in April, with a recent draft report suggesting changes to reduce the amount of revenue redistributed away from WA.

On marriage equality, Senator Smith said it had been time to move on the issue, which would have been a heavy burden for the government if debate had carried into 2018.

“My strong sense was that Western Australians themselves had got much more comfortable with it,” he said.

The path on that policy wasn’t easy either, with the government sticking to an election promise to hold a plebiscite, a process that took some months.

Senator Smith would have preferred to avoid a plebiscite, but the outcome showed his judgement of voters was on the money, with WA the second strongest ‘Yes’ voting state.

It was his bill to legalise same sex marriage that passed the parliament earlier this month.

Senator Smith has previously won battles running against many in his party, with his support for wheat deregulation one example.

“The challenge for WA Liberals in 2018 is to have the courage of their convictions,” he said.

“If the WA Liberal Party is to be successful over the coming year then its members and its parliamentarians must stand up and give a voice to issues that are important, even if that means standing alone.

“I’ve been lucky in the first five years of my parliamentary career that my convictions have aligned closely with the attitudes of Western Australians.”

His next target will be popular with Western Australians, with Senator Smith aiming to push on with GST reform and potentially broader changes to the federation.

“I’m quietly confident that GST reform will happen,” he said.

“It is now inevitable.

“There is such broad consensus across Australian economic commentators that the GST system is broken.”

Senator Smith said it was like a car with a flat tyre.

“If you keep trying to drive it forever, it will damage the car.”

Another key issue during 2017 was defence planning, with WA competing against other states to try and win a greater share of nearly $90 billion of dollar naval construction projects put out for tender by the federal government. 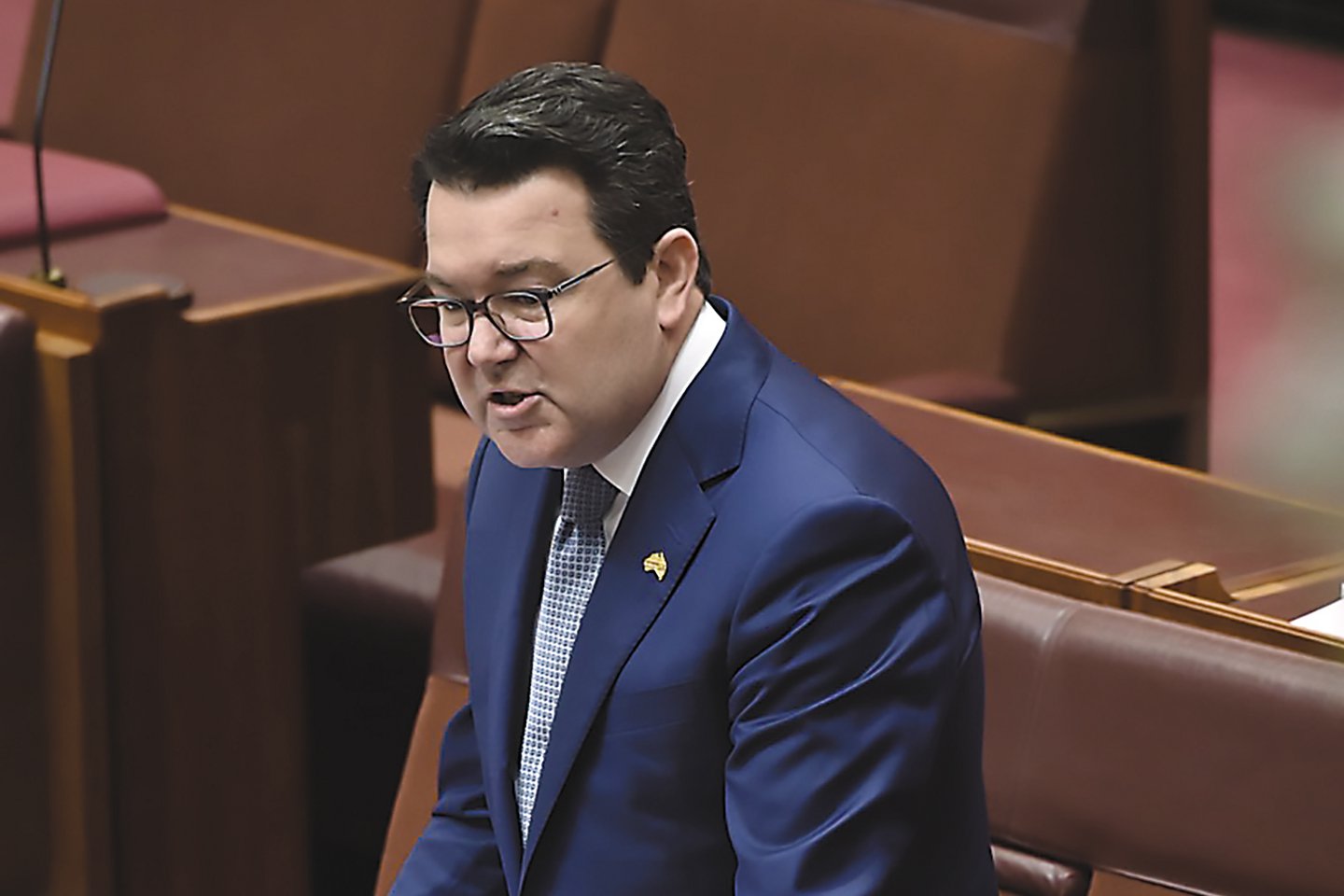 Austal has been in the middle of that debate, with chief executive David Singleton confident the Henderson-based shipbuilder will be among the winners when contracts for the Offshore Patrol Vessel build, led by German company Lurssen, are finalised.

For that work, Austal will be competing against fellow Henderson-based operator Civmec, which has just invested $80 million in a new shipbuilding facility currently under construction.

The business’s financials are stronger since Mr Singleton took over in April last year, with a net profit of $15 million in the year to June off the back of a $84 million loss in financial year 2016.

If Austal does win the offshore patrol work, it will add to a good run of commercial contracts and navy projects for its large US operation, including an order for a 15th littoral combat ship, to be built in Alabama, US.

Other US contracts included $15 million for post-delivery work on the littoral combat ships.

In October, Austal won $190 million of work to build two ferries for a Spanish client at Henderson, after being selected to build a $100 million ferry for a Norwegian business.