The 2014 Business News 40under40 First Amongst Equals winner is reaping rewards from challenging the status quo. 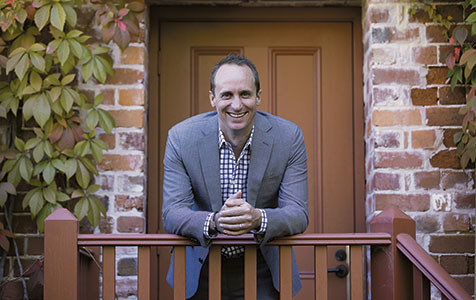 The 2014 Business News 40under40 First Amongst Equals winner is reaping rewards from challenging the status quo.

Tony Loxton’s not afraid to speak his mind.

He readily admits he can be too blunt at times, but then it’s clear his success with digital marketing and analysis company Digital Dialogue is due in part to his capacity to cut to the heart of the matter and clearly identify strategic options.

In less than five years Mr Loxton has founded the company, attracted a notable client list that includes Jeep, doubled staff numbers year on year (he now employs 65) and embarked on selling into the US.

It’s a far cry from his previous work in adventure tourism, and a journey that started from a desire to alter the marketing sector’s status quo.

Through various marketing roles and experience running his own businesses Mr Loxton has come to believe that marketing agencies are too focused on producing attractive creative campaigns, with little to no regard paid to whether those campaigns result in sales.

He also holds the contentious view that most agencies don’t want to analyse the effectiveness of their campaigns, as they fear negative consequences of any unfavourable findings.

“A lot of agencies out there are doing digital campaigns … one of the things people often say is ‘oh [digital’s] amazing because we can track everything’,” Mr Loxton told Business News.

“The reality is that most people don’t know what to track, and if they do they don’t even look at it.”

That’s not the case for Digital Dialogue, which Mr Loxton founded in May 2009 based on the opportunities he believed would flow if companies were given statistics demonstrating the effectiveness of digital advertising.

“It’s all about the numbers,” Mr Loxton said.

“If you can’t speak the numbers and speak that language, there’s very little value that you can provide.”

How Mr Loxton ‘speaks the language’ is through a range of technical platforms that pulls together metrics such as website hits and telephone calls in the hours following a television advertisement, for example.

“If we measure those things I can tell you within 24 hours of a television commercial going to air whether it’s going to work or not,” Mr Loxton said.

“We can see that particular ads have worked really well because we’re seeing a direct correlation with hits on their website.”

Intensely scrutinising the impact of Digital Dialogue’s own campaigns proves Mr Loxton holds no fear of failure on the creative front.

“That creative work has not come about by accident – that work has been planned and underpinned by us knowing exactly what numbers we need to achieve,” Mr Loxton said.

Mr Loxton started Digital Dialogue with a belief that analysing numbers in correlation with advertising campaigns was a winning formula not used in the marketing sector – thus providing him with a market niche.

At the time he didn’t have the technical expertise to make the data accessible in the user-friendly dashboard format Digital Dialogue now sells to clients as a product.

Instead, Mr Loxton was fronting up to clients with a host of Excel spreadsheets.

“I’d gotten a fair way down the path of patching different systems together to try and extrapolate the information I wanted, but I wasn’t getting the results I was looking for and I didn’t have the system that I had a huge amount of confidence in,” Mr Loxton said.

The work and time he had invested was enough to win over TourismWA, however, which contracted Mr Loxton to write its digital strategy and run a number of campaigns.

Soon after, Mr Loxton was able to source the technical expertise he required to turn his concept into a reality, which enabled Digital Dialogue to land Jeep as a client.

“They (Jeep) make all of their marketing decisions based on that data,” he said.

Mr Loxton says potential clients often have light-bulb moments upon seeing the information and services he can offer, and Digital Dialogue’s client base as grown as a result.

Mr Loxton has temporarily moved to Melbourne to grow the company with some major brands in the southern states, and is in discussions with potential clients in the US.

“We believe that we’re about three to five years ahead of the Australian market, so last year we decided that we would see what the response was from medium to large-sized companies in America and it was what we expected – they have an appetite for what we have,” Mr Loxton said.

“Their response was ‘this is amazing information we want it’.

“In Australia a lot of people go ‘this is a bit scary, we’ve never seen anything like this before’.”

Despite its rapid growth Mr Loxton maintains Digital Dialogue is far from an overnight success.

“I’ve worked for myself my entire life, apart from 18 months, and it’s that classic saying of every overnight success takes 10 years,” he said.

“That’s the truth of it; this hasn’t been four years, it’s been 20 years of learning and experience culminating in the right idea at the right time and taking advantage of opportunities.”

And Mr Loxton is not an anomaly among business founders – he has had his fair share of sleepless nights.

“There have been sleepless nights where I’ve been thinking ‘oh my gosh I’ve just hired four more people, what if a client doesn’t pay the bills’, but you get up in the morning and you fix it and make sure it works,” he said.

“One of the things that weighs on me now is the fact that I’m responsible for a lot of people’s mortgages, their livelihoods and families and stability and that’s a really serious responsibility.

“You’ve just got to make sure you make the right decisions at the right time; you take calculated risks but not stupid ones and for the most part it all seems to work out ok.”