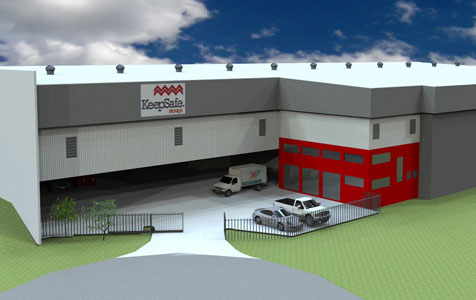 An artist's impression of the O'Connor facility, under construction on Stock Road.

KeepSafe Storage is beefing up its offering, recently beginning construction of an $8.5 million facility in O’Connor and unveiling plans for a $9.5 million development in Balcatta.

Keepsafe said today it had recently received planning approval from the City of Stirling for the Balcatta facility.

Each of the properties will have more than 650 self-storage units, ranging from one square metre to 24sqm.

The O’Connor facility, located at 295 Stock Road, is expected to be complete by March next year, while in Balcatta, construction is scheduled to begin at 46 Ledgar Road in January for a September 2015 completion.

The new facilities will cater for both residential and commercial customers.

KeepSafe currently operates a storage facility in Quarry Way, Mandurah, while it is also a subsidiary of the KBH Group of Companies.