The combined wealth of WA’s richest public company directors fell by around $3 billion in the past year, but some individuals bucked the trend.

The past 12 months has been a difficult time for company directors in Western Australia.

The economic slowdown has battered their company earnings, and in most cases that has flowed through to a weak share price.

The impact is reflected in Business News’ annual Wealth Creators survey, which tracks the value of shares held by WA-based public company directors.

Only 62 company directors made the $10 million cut-off this year. Collectively they hold shares in public companies worth $8.25 billion (see table at bottom).

Last year, 81 company directors made the cut, with shares collectively worth $11.7 billion.

The decline reflects the impact of the weak stock market, and a few high-profile exits.

Andrew Forrest stays comfortably at the top of the list, despite the value of his one-third stake in Fortescue Metals Group (and a small stake in Poseidon Nickel) tumbling by 37 per cent to $3.59 billion.

Number two on the list is Kerry Stokes – the value of his shares in Seven Group Holdings, Seven West Media and BC Iron is down 19 per cent to $1.47 billion (see Stokes biographies tell some of the story).

One of the biggest movers was Mark Creasy, helped by the transfer of his 30 per cent stake in the Nova nickel project from private company Ponton Minerals into public company Sirius Resources.

Mr Creasy was issued 70.6 million Sirius shares (and $28 million cash) in return for his Nova stake and afterwards boosted his Sirius shareholding when he exercised 28 million share options at 60 cents per share.

It was a good deal for Mr Creasy, who exercised the options soon after other investors paid $3.82 per share in a Sirius capital raising.

With Sirius shares currently trading around $2.90, Mr Creasy’s 35 per cent stake in the company – combined with smaller holdings in Northern Star Resources, Coziron, Windward Resources, Antipa Minerals and Legend Mining – is worth $443 million.

Added to that would be his private investments, including White River Exploration (64 per cent owned), which recently struck a joint venture agreement with Africa-focused Harmony Gold Mining Company.

His property assets include an office building at 8 Kings Park Road and two adjoining houses, which he bought for $19.7 million.

TFS Corporation chairman Frank Wilson was another winner last year, as the share price of his agricultural investment company recovered.

The value of his TFS shares more than doubled to $72 million.

His portfolio of shares jumped in value to $80 million, and that was after raising $24 million from the sale of some of his Western Areas stock, to fund new exploration plays in Brazil.

Her wealth is underpinned by the half-owned Hope Downs mine, in production, and her 70 per cent-owned Roy Hill project, which is heading towards production next year.

Mrs Rinehart’s fortune has been helped by royalties paid year after year by Rio Tinto subsidiary Hamersley Iron, under a deal struck by her late father Lang Hancock and his business partner Peter Wright in the 1960s.

Mr Wright’s descendants, including his daughter Angela Bennett and the family of his late son Michael Wright, are among the state’s wealthiest people.

Stan Perron, who holds the Toyota wholesale franchise for WA and has extensive property investments, also gets a small share of the Hamersley royalties, after co-investing with Mr Hancock.

He is worth an estimated $2 billion, while the Bennett and Wright families are worth about $1.6 billion each.

The value of his company has rocketed over the past year after achieving several breakthrough deals toward commercialising its technology in US gas projects.

As a result his shareholding jumped in value to $13.9 million.

A couple of big takeovers and one notable resignation have resulted in five wealthy individuals disappearing from the top of the directors' interests list.

Mr Poli was paid $405 million for his stake in Aquila, which he built into a major iron ore and coal mining company.

He is already on the lookout for his next deal, with Business News reporting last week that he is evaluating the purchase of the Port Geographe canal project near Busselton, through his company Bellridge Estates.

Similarly, the takeover of Aurora Oil & Gas resulted in a big payday for its founders, led by chairman Jonathan Stewart, who benefited from being an early mover in the booming US shale gas industry.

After walking away with $86 million, Mr Stewart is understood to have kept together the key players from Aurora’s Perth team, including former directors Graham Dowland and Ian Lusted, as he starts evaluating new opportunities.

Another exit from the list was iiNet founder Michael Malone, who resigned as managing director in March after 21 years with the highly successful internet business.

When he resigned from the board, Mr Malone held 9 million iiNet shares.

He sold 1.1 million shares over the next four months, raising $8.5 million and valuing his residual stake at about $60 million.

Perhaps more significantly, the sales put him just below the 5 per cent disclosure threshold for substantial shareholders.

Welcome to a private life, for now at least. 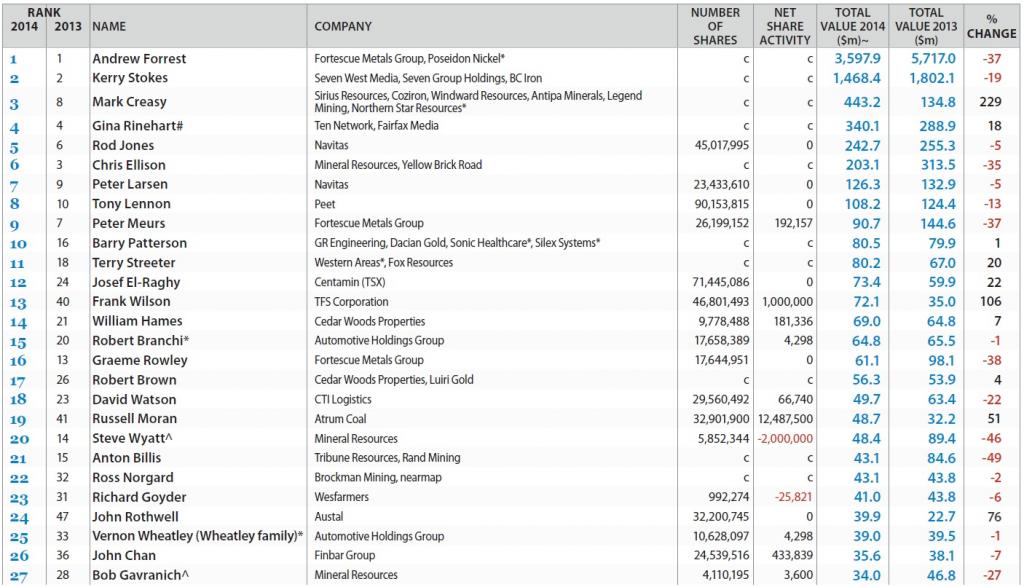 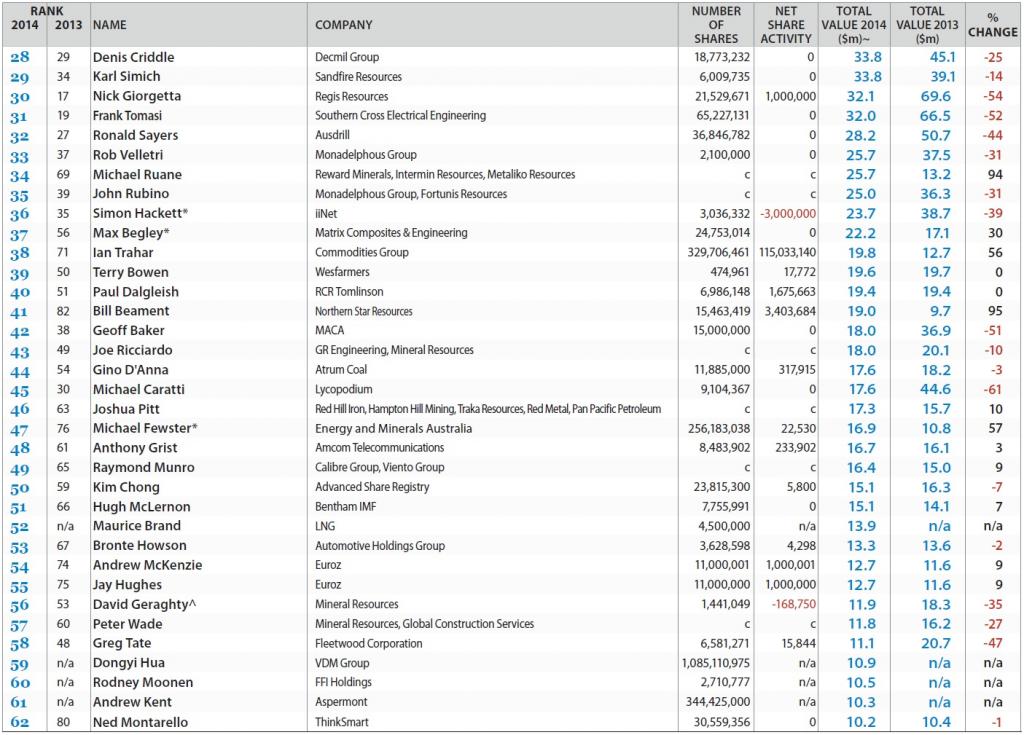