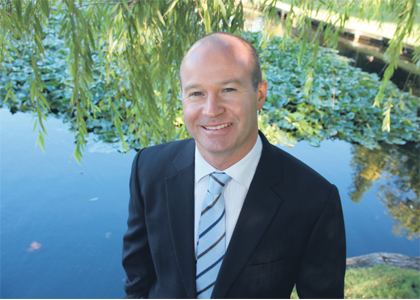 "We're here, we're not going away; we're not a flash in the pan. We've established a credible business. We will survive."

Get out of here, the whole thing is doomed,’ Steve Gostlow was told nearly nine years ago when Tox Free Solutions was in serious financial strife.

The words were from his then managing director, who was about to head back to his family in Spain.

It was 2004 and the MD and senior management personnel were jumping ship, leaving Mr Gostlow, who was the company’s north-west regional manager at the time, as the highest ranking officer.

“I was living up north at the time and we were none the wiser up there. I was just having fun and doing pretty well,” said Mr Gostlow, who was enjoying Karratha’s outdoor lifestyle with his wife.

Sensing a commercial opportunity, Mr Gostlow decided to stay and accept the challenge of heading up an embattled company, a move he felt was being “more in charge with my own destiny”.

“I saw that they had this licence incinerator in Kwinana and in Port Hedland and I saw some potential with these licences; I thought if I could get on top of the market and introduce some services, we could expand the business.”

At the time, Tox Free was focused on commercialising its soil remediation technology, and was bringing in waste from the east coast, particularly from Melbourne and Sydney, to treat in Perth.

“It was good technology but it was very expensive to operate; you couldn’t compete with landfill, and there was only a certain type of waste you could put through it,” Mr Gostlow said.

His first task as boss — starting as WA state manager and then as managing director at the beginning of 2005 — was to trim costs.

“The first thing I did was to stop the technology focus and instead concentrate on the waste streams being generated by neighbours on the Kwinana strip and up in the oil and gas industry in the north-west,” Mr Gostlow said.

However after finding the Kwinana facility was a drain on the somewhat profitable Port Hedland facility, Mr Gostlow placed the Kwinana operation on care and maintenance and, “much to everyone’s disgust”, closed the head office in Nedlands.

“I was a reverse fly-in, fly-out worker. I was living in Karratha, flying to Perth during the week and flying back,” he said.

“But Perth was really where the problems were, so I had to move back.”

He then methodically set about rebuilding Tox Free, both organically and through acquisitions, which were a strategic way around the arduous process of obtaining licence approvals from the state government and other processes that go along with developing technologies.

He was also wary of developing technologies in-house after Tox Free’s failure to commercialise its technology and run a profitable business.

There was also the added responsibility of answering to the Australian Securities Exchange, which was keeping a close eye on Tox Free.

“We were in the sin bin with the ASX, we were publishing our cash flow monthly because any day we were going to go under, effectively,” Mr Gostlow said.

“So each month we took the opportunity to not only publish just our cash flow but also publish our profit, and each month it was just a little tick up.

“And we were a penny dreadful at the time, a 1 cent, 2 cent share, so Hot Copper and other retail chat sites were waiting for us to fall.”

The moment never came and now Tox Free’s shares are valued around $3.50.

Mr Gostlow marks the opening of the Pilbara Resource Recovery Centre in Karratha in 2009 as his proudest achievement, having spent five years developing and winning the company’s first ever total waste management contract from oil and gas major Woodside.

From there, contracts with other businesses started to flow, including Rio Tinto, Chevron, Fortescue Metals Group, Apache Energy, Serco, and the Broome and Derby councils.

Mr Gostlow even acknowledges the importance of the little achievements, including numerous public community meetings and dealing with local councils that didn’t look too kindly on the hazardous waste industry.

“Those meetings could get quite hostile, people ranting and raving, and you’re standing on the stage being called everything that you could possibly be called,” he says.

“You try to just keep it to the facts and what is real and not real.

“You get a tough outer shell, it’s really character building.”

That tough shell may come into good use for Mr Gostlow’s ambitious aspirations for Tox Free, which now has national operations.

Admiring companies such as Wesfarmers for its acquisition of Bunnings, Mr Gostlow wants Tox Free to be a household name and eventually have a market capitalisation of $1 billion, which he believes is potentially achievable within eight to 10 years in a market valued at an estimated $4 billion.

“We’re here, we’re not going away; we’re not a flash in the pan. We’ve established a credible business.