SPECIAL REPORT: A new corporate advisory firm working from a historic building in West Perth has rapidly made an impact, advising on more than a dozen transactions for public and private companies. 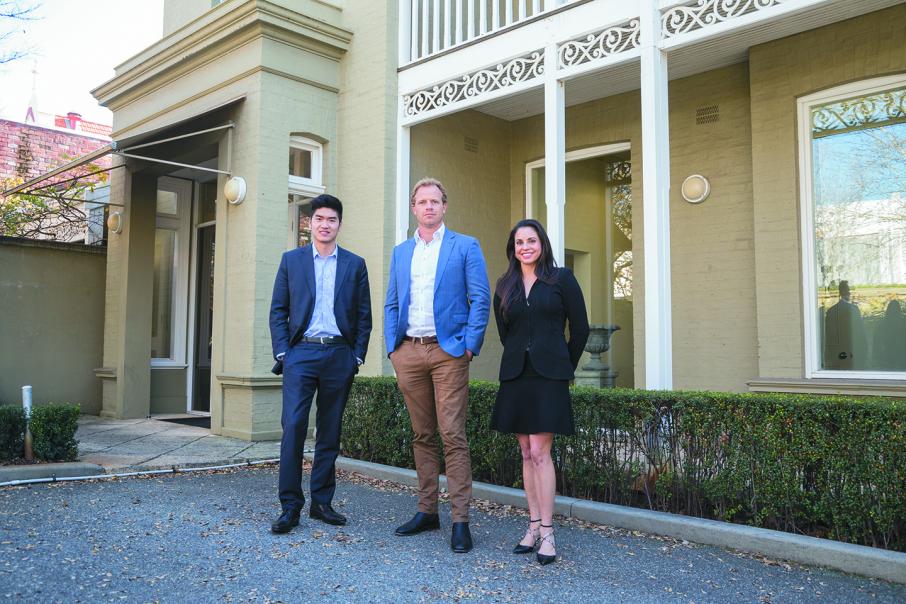 A new corporate advisory firm working from a historic building in West Perth has rapidly made an impact, advising on more than a dozen transactions for public and private companies.

Visitors to the West Perth offices of Sternship Advisers will be struck by the symbolism.

The corporate advisory firm has leased space at 1202 Hay St – the grand old building that formerly housed law firm Blakiston & Crabb, which for more than two decades was synonymous with the West Perth mining market.

While Blakiston & Crabb has become part of national law firm Gilbert + Tobin and moved to Brookfield Place in the CBD as part of its widening brief, the key people behind Sternship have moved in the opposite direction.

Founder Tim Day, who has spent most of his 15-year career looking after the big end of town as an adviser with Macquarie Group and UBS, has shifted his focus.

He established Sternship just more than a year ago as an independent corporate advisory firm and investment house.

“The idea is to have a part of the business that can invest in some smaller companies and help them grow, to find the emerging leaders out of Perth,” Mr Day told Business News.

“At the same time, we want to still service some the bigger clients we worked with at UBS.

“At the big banks these days, it’s harder to focus on the smaller companies; it has become more and more restrictive and Perth is largely a mid-cap market.”

Sternship’s client list illustrates the strategy; it includes unlisted firms such as maintenance contractor IAS Group and digital marketing outfit PINCHme, through to rich lister Mark Creasy and listed companies such as SRG and Mineral Resources.

To that end, the building at 1202 Hay Street also houses the offices of two funds management groups.

One is Precision Funds Management, which is led by former stockbrokers Tony Kenny and Tim Weir, who manage the $33 million Precision Opportunities Fund.

“The idea is to create a bit of a hub where there are a lot of resources companies going through, there are ideas being shared, and then there is the history with Michael Blakiston and Rick Crabb,” Mr Day said.

“Most clients have been in this building at some point, so it is somewhat symbolic with Perth returning to its mining glory days.”

The $17 million purchase of Curtin University spin-out HiSeis, announced in May, illustrates how this strategy is put into practice.

Sternship and Azure Capital assembled a group of investors to buy the innovative seismic exploration company.

They included Precision and Tanarra, as well as listed mining services contractor Ausdrill.

“Part of the advantage of being in the hub here is sharing these opportunities,” Mr Day said.

“A lot of our clients came into that as well, and that was part of our value proposition, that we could bring investors that could help to grow the business.”

Another technology business backed by Sternship is SEQTA Software.

Mr Day initially invested in Seqta while at UBS and introduced the company to merger partner Synergetic Management Systems.

Since leaving UBS, Sternship has invested additional funds in Seqta.

“We will invest our Sternship balance sheet or our key relationships as co-investors and then help with our expertise and relationships and knowledge.

“We can help to drive consolidation and they know they have access to capital.”

Mr Day’s first engagement at Sternship was advising sandalwood investment company Quintis on its dealings with bondholders amid mounting problems through 2017.

The Quintis role morphed into a mandate with receivers McGrathNicol, advising on the $175 million recapitalisation announced in May.

“It got very busy quickly, that was very intensive,” Mr Day said.

Experienced company director Neil Hamilton, who had spent eight years as chairman of the UBS Perth office, joined as chairman in May, after his contract with UBS expired.

“We’ve been in the fortunate position where all our work has been from people approaching us,” he said.

“It’s integrally related to both the big bank experience we got at UBS as well as the relationships we fostered during that time.”

“The model is to be an independent adviser, not necessarily linked to capital raisings,” Mr Hamilton said.

“We’ve also got the freedom to have a much broader client group.”

“We’re completely independent, we don’t have a broking operation, so it’s very much about us stepping back and looking at all the different options and then bringing in the right broker or a global bank if that’s required,” he said.

“We end up being embedded more into a company, whereas a big bank is pitching and always somewhat on the outside and then brought in depending on the transaction.”

Mr Hamilton’s move to Sternship came after he resigned the last of his public company board positions, which had included Oz Minerals and Metcash.

“I’m over sitting on big public company boards and all the compliance and governance and travelling every week to Sydney,” Mr Hamilton said.

However, he is open to the possibility of joining a smaller public or private company board where he can add value.

As an example, Mr Hamilton was invited last year to become chairman of base metals miner Avanco Resources.

It was during his due diligence review that the Avanco board explored strategic options; that led to Mr Hamilton negotiating the friendly $418 million merger between Avanco and Oz Minerals.

“That was almost like a project, asking what’s the next big step for the company,” Mr Hamilton said.

“I was able to take that to Oz and negotiated the deal with both sides.” 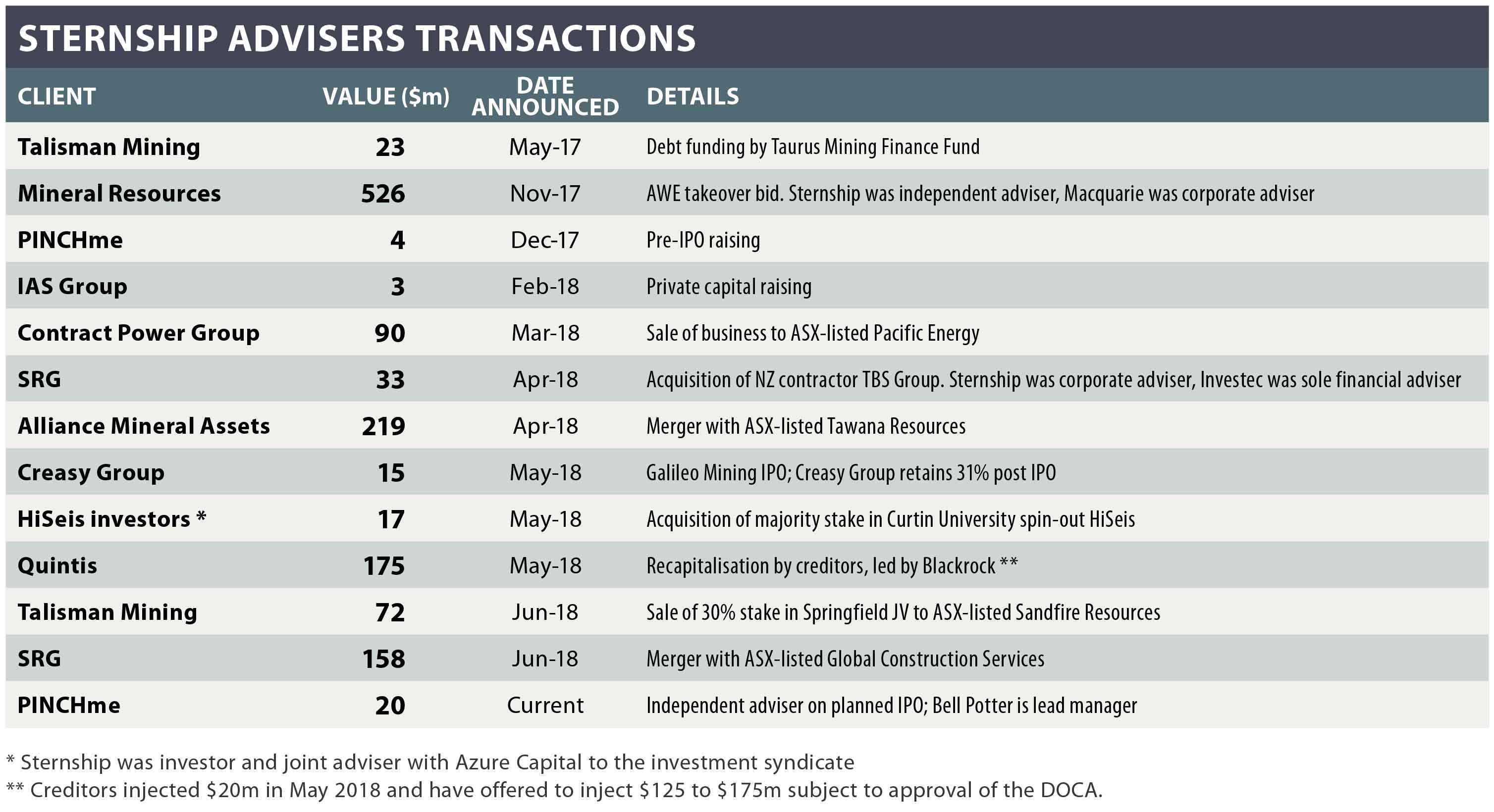 It advised Talisman on a $27 million debt funding and the sale of its 30 per cent stake in the Springfield joint venture.

For SRG, Sternship advised on the acquisition of New Zealand contractor TBS Group and the merger with Global Construction Group.

“They’re the kinds of transactions that would have been difficult to do at UBS, whereas for Sternship they’re a perfect size,” Mr Day said.

On several transactions, Sternship has not been the only adviser.

For instance, SRG engaged Investec as sole financial adviser on the TBS acquisition and associated capital raising, while Sternship had a broad role as corporate adviser.

Another example was the Mineral Resources takeover bid for AWE, which did not succeed.

MinRes engaged Macquarie as corporate adviser while Sternship acted as an independent adviser.

For the $15 million initial public offering of Galileo Mining, Bell Potter Securities was lead manager while Sternship was adviser to the company’s major shareholder, Mark Creasy.

Sternship will also be working alongside Bell Potter on the upcoming IPO of New York-based PINCHme.

PINCHme will be one of the more unusual ASX listings undertaken by Perth advisers – it is a sampling community for major consumer goods companies like L’Oréal etc.

PINCHme has completed more than 500 campaigns and delivered millions of samples for clients such as P&G, Johnson & Johnson, Unilever, L’Oreal, Nestle, Pfizer and Starbucks, and built annual revenue to about $15 million.