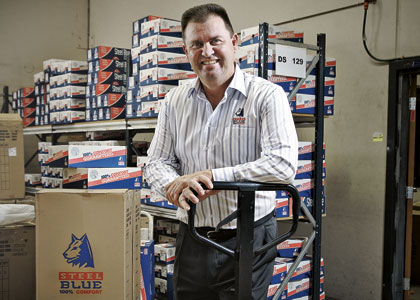 Safety boot manufacturer Footwear Industries has been given the luxury of picking and choosing Australian distributors as demand for its Steel Blue brand increases.

The Bassendean-born company produces an average of about 1.4 million pairs of boots a year – more than double that produced in 2006 when the company was named a winner in WA Business News’ Rising Star Awards.

In the past five years the company has also established agreements with distributors as far afield as Tanzania, Norway, Vietnam, Brunei, Qatar, Switzerland and the US, which founding director Ross Fitzgerald said had all come about through word of mouth.

“In some cases they come to us because they’ve heard about us, it’s quite interesting to see in an email or a phone call how they’ve come across Steel Blue,” Mr Fitzgerald said.

But he said the company’s goal was to turn that relationship around.

“In the future, it’s probably going to be more about our process in us making that call rather than people wanting to be our distributor and us jumping on board with them,” he said.

“Now we try to go through a proper process where we do more homework on the country and that region before we make any calls on distribution.”

International business accounts for about 10 per cent of the company’s revenue – a figure Mr Fitzgerald said he would like to see double within five years.

Meanwhile, on home soil Footwear Industries has about 18 state and territory managers working across Australia and New Zealand and the footwear can be bought in about 650 outlets.

But Mr Fitzgerald said there were more customers wanting to stock the product.

“We are turning away distributors … we already have enough distribution in Australia and we don’t really need to increase that,” Mr Fitzgerald said.

Steady increases in demand prompted the company to establish a trading agreement with a manufacturer in Jakarta about eight years ago – it enabled the company to have its Malaga factory focus on made-to-order boots, while the Jakarta factory produces the backfill of general stock.

Mr Fitzgerald said the company would not move all its manufacturing overseas because of the convenience afforded by having a local factory.

“It’s got its advantages by the fact that you can make whatever you require very quickly, whereas obviously in Jakarta it’s not as easy to get product out quickly,” he said.

“It’s good to have that back-up as well; from a risk point of view it’s always good not to have all your eggs in one basket.”

The rate of growth in turnover confirms business is good for Steel Blue. Mr Fitzgerald says the company has enjoyed steady growth of about 15 per cent each year since starting up in August 2005.

Annual accounts lodged with the Australian Securities & Investments Commission show revenue amounted to $49.2 million in 2010 and $57.6 million in 2011 and Mr Fitzgerald said it should reach $65 million this financial year.

Mr Fitzgerald puts the company’s success down to a combination of pitching a product into an area of the market, which had not yet been penetrated, and its 100 per cent money-back guarantee.

The company was formed nearly 17 years ago by a small group, who had worked in another footwear company. They believed the job was not being done right and set off to create Steel Blue.

Mr Fitzgerald said the initial intention was to create a boot of better quality than the low-end, cheaper boots on the market and back it up with a 100 per cent comfort guarantee.

“What you are doing is you are guaranteeing your product,” he said.

“If you think that your product is good and that people will wear them and have a good outcome …If you think and know that then all you are doing is supporting what you are saying, so it’s almost like a practical demonstration of how comfortable and good that product is.”

Mr Fitzgerald said the initial driver for introducing the guarantee was to get the boots on people’s feet and the rest of the work would be done through word of mouth.

“But now it turns out we’re the biggest because we are the best.”

The mining and resources boom has accounted for a lot of Steel Blue’s business. When the GFC hit the company took the lull in demand from the mining sector as an opportunity to reassess how it operated.

Mr Fitzgerald goes so far as to describe it as a blessing, which enabled the company to streamline its middle management and operate more efficiently.  That reorganisation included bringing in former banker Garry Johnson as its first chief executive and founding director Don Holmes moving to the chairman’s role.

Mr Fitzgerald has been the only one of five founding directors to stay in a working role as general manager of sales.

While the bulk of business still comes from the resources industry, Steel Blue is also extending its range of women’s and executive footwear.

He estimated the company’s share of the Australian market to be around 25 per cent.

International companies looking to get into the field continue to make intermittent appearances but largely without success.

“They keep coming in but they’re finding it difficult,” he said.

“It’s not that easy and it takes time and a lot of companies don’t have that time on their hands; they are not that patient because they want to make inroads very quickly when it just can’t happen that way.

“They’re also not getting a lot of support from distributors because they don’t want to put more stock on their shelves.”

DO YOU KNOW A RISING STAR?
Registration for the 2012 Rising Stars Awards is now open! Visit www.rising-stars.com.au 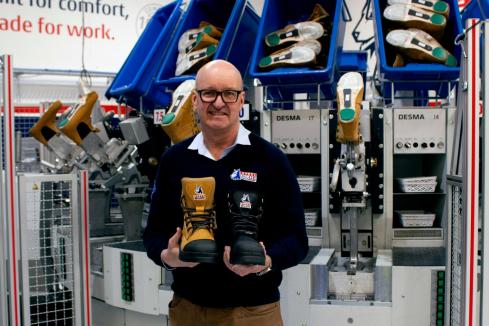 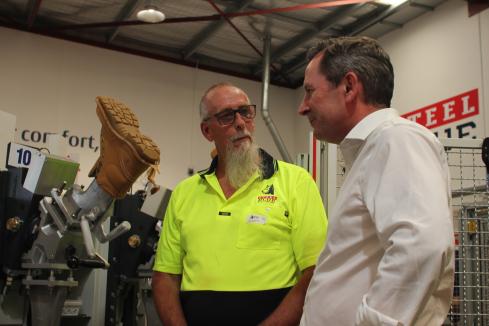 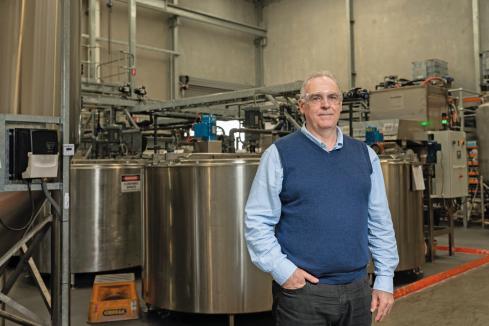 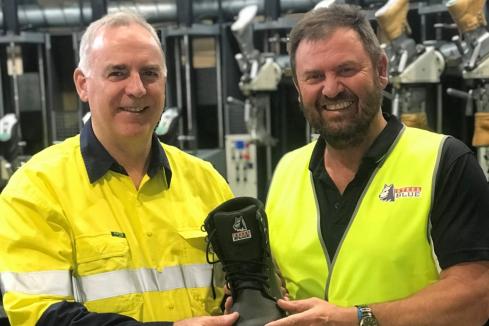