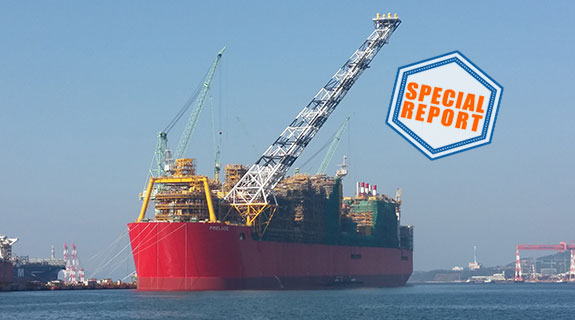 HEATING UP: Work on Prelude is well under way.

A looming worldwide glut of LNG has added to the increasingly difficult commercial environment.

Despite the fallout from the Woodside announcement, other LNG projects in WA continue to push ahead.

Chevron shipped first gas from its $55 billion Gorgon plant last month, despite some teething problems, while production is still at least a year away at its Wheatstone project. Inpex’s Ichthys LNG facility is gearing up for production within a similar time frame.

In addition there are still some brownfields projects that might get the green light, with US-based Hess seeking to develop the Equus field in the Carnarvon basin through a deal with North West Shelf, and Woodside weighing up the Greater Enfield project.

Contractors are also jockeying for work, among them hospitality services company Sodexo, which recently won a contract for facilities management at the Prelude joint venture between Shell, the Korea Gas Corporation and Inpex.

However thousands of jobs have been lost across the sector in the past 18 months and some contractors have exited the local market entirely.

In March, Woodside chief executive Peter Coleman said despite efforts to reduce the cost of the Browse FLNG project, a tough commercial environment would make it unviable.

A decision on the expansion at Greater Enfield, which is targeting oil, is expected in the middle of this year.

He said there was a strong case in the current price environment for merger and acquisition activity, although it was unclear what the appetite for that would be like at Woodside.

Additionally, analysis from investment bank Credit Suisse suggests Browse is worth about $0.14 per share for Woodside investors, and that a final investment decision was unlikely for the project in the next five years.

With the state’s next marginal greenfields project delayed, there’s a good case to be made that no new LNG plant will be built in WA until well into next decade.

“What we will see is debottlenecking of new facilities.”

That would lead to higher volumes, which nationwide could be equivalent to one or two trains.

Further activity would be in backfilling of facilities such as the North West Shelf, which will have capacity available from around 2023.

It was possible the Browse field might be developed through that avenue, Mr Kavonic said, because backfill through the existing plant was potentially more cost competitive than developing a new facility.

Other options included backfill through Prelude or Ichthys.

Either way, the move is a blow for 27 per cent Browse JV partner Shell, which had hoped to build further floating facilities and achieve economies of scale.

“We could see the (LNG) supply demand balance beginning to tighten towards the middle of next decade,” Mr Kavonic said

“To meet demand for the mid next decade you need to start making final investment decisions four or five years before that.”

That meant that front-end engineering design work for some potential investments, which would start in advance of those decisions, would be happening by the end of the decade.

A further potential brownfields tie up would be Equus.

Project proponent Hess is looking to process gas from that field through North West Shelf, and is expected to go to a final investment decision in mid-2017.

Equus would involve 16 wells and a semi-submersible floating production system. 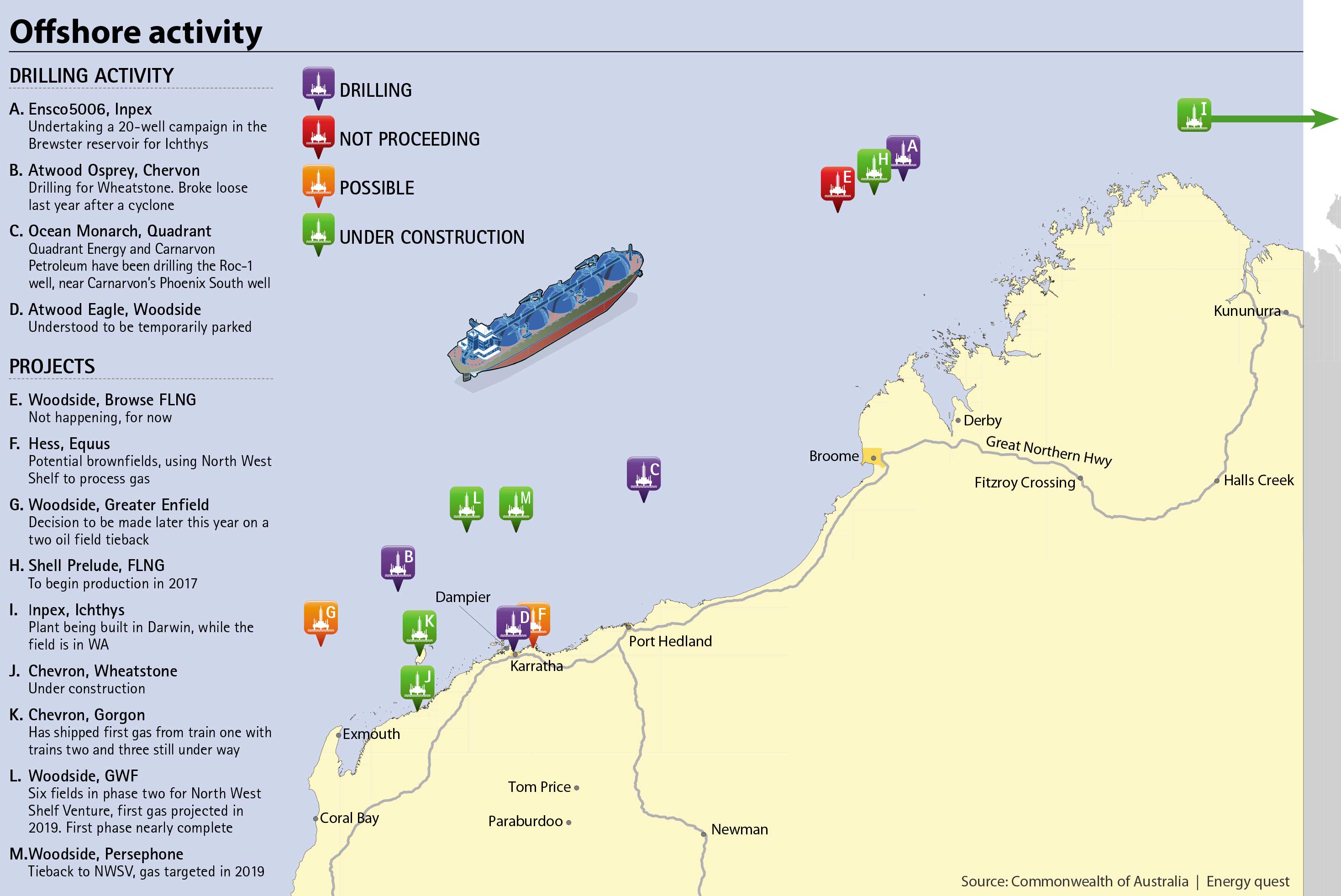 Four rigs are active in WA at the moment, with two working on development wells (see map), according to energy advisory firm Energy Quest.

A further rig is understood to have been contracted to Woodside and is now parked temporarily.

Only one is undertaking exploration drilling, for Carnarvon Petroleum and Quadrant Energy.

That well is near Phoenix South, where Carnarvon made a major oil discovery in August 2014.

Mr Kavonic said demand for rigs was well down, with prices at the middle of last year about 40 per cent lower than prior to the drop in oil prices.

That compares with a price drop of about 15 per cent across the industry as a whole.

With proponents readying to enter production, the contracts process is now focused on sustaining capital and ongoing operations.

ABB Group secured a deal for provision of equipment and services, Sodexo for facilities management, and Wood Group for flexible riser integrity management.

Another emerging trend is towards usage of big data, with contracts for data analytics going to Accenture and GE.

Life extension and maintenance work is also available, with Monadelphous having secured contracts for the North West Shelf Venture. 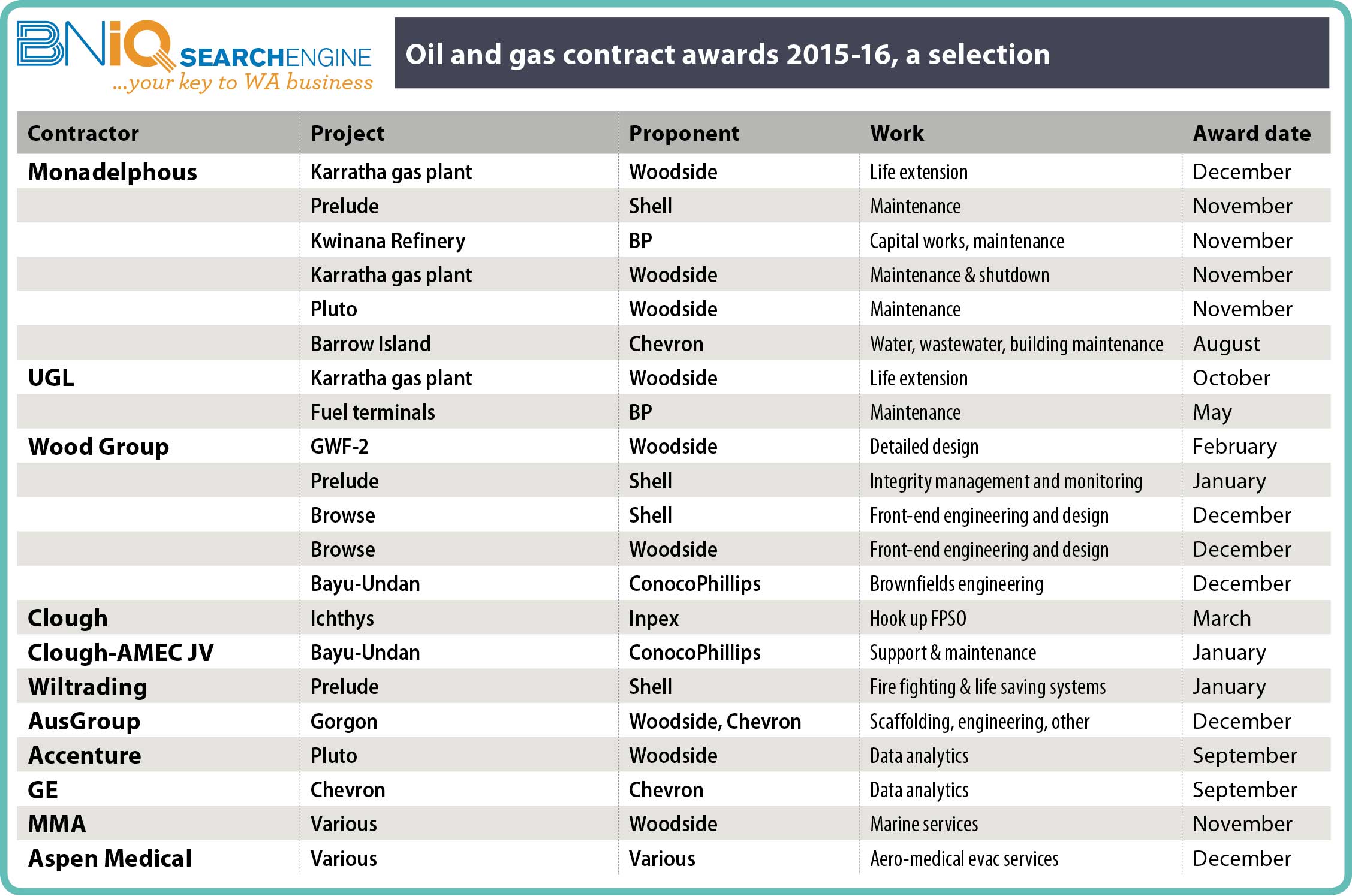 Woodside is planning almost $2 billion of capital and sustaining spending in 2016, according to its annual report.

About $760 million of that is through Wheatstone.

At Pluto, a spend of $230 million is planned for well developments and sustaining capital ($25 million), while about $290 million is slated for life extension work on the Persephone project at the neighbouring North West Shelf, north-west of Karratha.

Sustaining capital work at North West Shelf is $30 million for the year.

Other WA contractors are targeting work on the east coast at the three Bowen Basin projects.

Valmec managing director Steve Dropulich said the focus for contractors at the moment was on maintaining lean operations.

He said the company had emerged when a vacuum in the market for small to medium sized contractor offerings appeared during the boom.

The company is currently working on the domestic gas facility connected to the Gorgon project.

“It (the gas wellhead to pipeline facilities market)  is a niche space that we attacked fairly early on in the piece,” he said.

“This is business is all about contacts.

“It is very much a high barrier to entry, that’s why a lot of players that have entered Australia from overseas shores … have struggled.”

Another emerging trend was for some of the state’s miners to shift from diesel to gas to hedge future supplies, he said.

That would lower costs for miners, while improving energy supply reliability.

For engineering, procurement and construction contractors targeting LNG, the availability of work on a global scale is expected to drop this year and in the years ahead as more trains come online.

Contractors with strong US exposure, such as Bechtel and Chiota, are expected to fare better than those such as KBR.

The biggest show in town this year is set to be the triennial international LNG conference, LNG 18.

It comes as Australian LNG production is projected to reach 85 million tonnes per annum, rivalling Qatar as the world’s biggest producer.

In a nod to the importance of the industry to the national economy, Prime Minister Malcolm Turnbull is expected to head to Perth to open the conference.

Standard & Poor’s commodity ratings director Simon Redmond summed up the mood heading into the conference by saying it would take a major event to shift market expectations this year.

“Given the volume of new LNG supply, mostly contracted, the LNG market will likely remain a bit like the proverbial oil or LNG tanker – slow to change direction,” he said.

A variety of topics will be touched on, including: analysis of future trends in reliance on spot market buying versus long-term contracts; and innovations in the industry, including the use of sea containers to transport LNG cargoes to places where gas might otherwise be inaccessible.

One of the key themes in the industry at the moment is collaboration, which was highlighted at the Australasian Oil & Gas conference earlier this year.

KPMG energy lead Jonathan Smith said if the industry had been able to turn a profit with oil prices at this level a decade ago, it could do so again now.

“It’s the only industry I know that watches the commodity price on an hourly basis but tries to do everything on a long-term plan,” he said.

Mr Smith said he felt that, in an environment where margins were tight, companies would be more likely to collaborate.

The low-hanging fruit for collaboration would be in areas such communications and emergency responses, with seven explorers and producers recently jointly procuring Canberra-based Aspen Medical for Aero-evacuation services.

But Mr Smith said he hoped the trend would extend to maintenance and data analytics.