People who fret about declining industries should read this story about a musical journey from the Governor Broome Hotel in Northbridge to the Blues at Bridgetown festival. 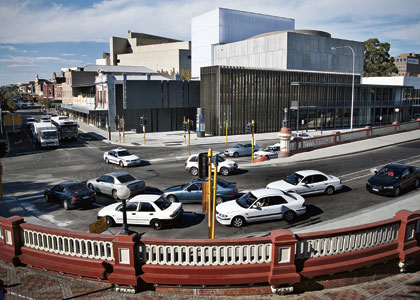 People who fret about declining industries should read this story about a musical journey from the Governor Broome Hotel in Northbridge to the Blues at Bridgetown festival.

WHEN I was in my late teens, one of my favourite spots in Perth was the Governor Broome Hotel, on the corner of Roe and William streets in Northbridge.

The small pub had a saloon bar fronting Roe Street and a corridor off William Street leading to a bohemian lounge that featured red velvet drapes, large mirrors and chandeliers.

That, at least, is my memory of the room, more than 30 years ago.

It was the room where bands like The Triffids and The Scientists played; bands that took their distinctive music from small inner-city hotels to overseas markets and garnered international acclaim.

It was a sad day when the Governor Broome was bowled over; even sadder when the site sat empty, or as a little-used car park, for many years afterwards.

Other favourite haunts from that era, like Hernando’s Hideaway in East Perth and the Majestic Hotel on the Applecross foreshore, have also disappeared.

Still other music venues, such as the Vic and Subi hotels, continue to trade, but are barely recognisable after many renovations and upgrades.

It’s a natural human emotion to be upset when things that are important to us are taken away.

The reaction is much stronger when it’s jobs that are taken; that’s a process many people around Australia are going through at the moment.

Many long-running businesses are closing down because they are no longer viable. The high Australian dollar, which makes imports much more competitive, and high labour costs compared to competing markets, are usually the biggest problem.

Changing tastes can also contribute their jobs when the Swan Brewery in Canning Vale was shut down.

On the Kwinana strip, there have been recurring stories of steel fabrication workshops cutting employment as they battle to stay open.

What has been particularly disappointing is that these businesses were meant to be in the midst of a boom, supplying big resources projects around the state.

Instead, the commodity boom underpinning those projects has played a big part in pushing up the dollar and pushing up costs, making local suppliers less competitive.

Boat builder Austal is another business that has been forced to make radical cuts to stay alive. Often hailed as a role model for high-tech, internationally competitive manufacturing, it has stopped exports from its Henderson shipyard.

The local operation is focused on navy contracts, while the export operation has largely shifted to Austal’s Philippines ship yard.

Governments are always tempted to try and halt this process, or at least slow it down. Taxpayer subsidies for car manufacturers are a case in point.

One reason governments do this is because people struggle with change. It makes them nervous, worried; they are unsure where their next paycheque is going to come from.

Yet if we look at the broad sweep of history, it becomes obvious this is a process that has been running for many years.

Change is a constant; the smart response is to accept its inevitability and be open to new opportunities.

It’s impossible to know where those opportunities will come from, but come they have; that’s why we have consistently low unemployment, despite the decline of some industries.

Harking back to the musical analogy, who would have thought the Governor Broome Hotel site would become the home of the State Theatre Centre, one of the state’s most important cultural institutions?

And at a personal level, I never anticipated I would end up last weekend in the small South West country town of Bridgetown, along with thousands of other people, enjoying a blues music festival.

Just to show how much things can change, who would have thought Status Quo, the bad boys of 70s rock, would end up not just fronting Coles ads, but recording a new CD that will only be available in Coles stores?

Maybe in this case, however, Status Quo should have maintained the status quo.