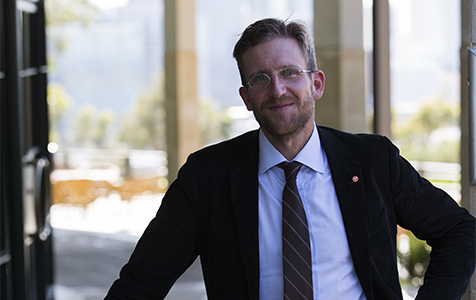 "Adding more roads to ease congestion is like loosening a belt to manage obesity."

That great line was delivered by cycling enthusiast Paul Steely White at his thought-provoking talk put on by the RAC this week.

While I think this was an expression borrowed from others in the urban planning world, it was one of the few times that Mr White, the executive director of New York not-for-profit group Transport Alternatives, used analogy to explain why cycling and public transport were winning over governments in some major US cities.

On the whole, however, while very entertaining, he primarily focused on statistical evidence to support his claims that cycling was safer, less capital intensive, better for property values and better for business.

And that is where I am increasingly finding myself looking for answers as this debate on congestion keeps bubbling to surface in Perth. While I am a car-bound daily commuter and increasingly frustrated by the rising levels of traffic at all times of the day, I am also well-travelled and educated enough to know that more road building won't solve the problem.

So I am prepared to be open-minded about the alternatives, especially as some of the changes that have taken place in Perth in recent years appear to be bearing fruit – even if they, regrettably, coincided with a rise of population that has created the congestion.

Each time I consume a bit of this information I look for the tidbits that help inform me about how we can learn from others to do things better in our own way.

For instance, I was particularly taken with Mr White's highlighting of the reclamation of small elements of New York public space once dominated by roads or even car parks to become communal gathering places, simply by painting the tarmac and adding a few temporary bollards. It is intriguing how short-term experiments can become permanent once they are accepted. Times Square is now being made over as a result; that is quite a change.

Another interesting development was how the government offered communities the right to apply for such changes. Instead of a top-down approach, change was driven from the bottom up.

Of course this has not been without controversy, but we all know dealing with change can be challenging.

However being armed with statistics did help shift the argument from being an emotional one between two sets of entrenched views, each with its own set of anecdotes, to one that is far more rational.

And there is some chicken and egg here; statistics don't come ready made. Mr White points out that his organisation has been working for 40 years to achieve the changes it has in New York. Over that time, small changes have contributed to mounting evidence that there are alternatives.

Those New York statistics (or those from the Netherlands) are not always instantly applicable to our circumstances. Nevertheless, the more change there is elsewhere, the easier it is for us to consider the opportunity to make sensible shifts that improve our community for all.

Finally, I was also taken by a key element of Mr White's argument – transport and other urban planning issues provide for the opportunity to create equality, of a type that is achievable.

"Achieving income equality is difficult, but you can achieve equality of lifestyle," Mr White told the audience.

Well maybe. Equality of lifestyle is a stretch. We can't all have luxury boats, holiday homes and be part of the jet set.

But there are minimums we can seek. Child mortality, access to basic medical services and a certain level of education are among those. There are limits, even in these.

Perhaps we can do better with our communities.

If small and sensible changes to suburbs and roads can help create communities where people want to live, work or visit, and result in healthier, happier people who are more productive ... I'd back that.