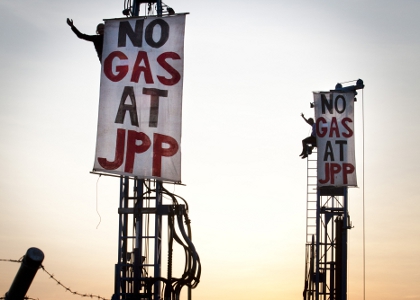 Protesters scaled the rigs at James Price Point in September in a bid to slow down works.

Conservation groups say today's state government approval of the contentious James Price Point gas project near Broome is a step towards "environmental disaster" and have urged the Commonwealth to reject the proposal.

The project sill requires approval from Mr Marmion's federal counterpart Tony Burke and a decision by the Woodside-led joint venture to proceed - a prospect that is becoming less likely as cost estimates increase to $30-$40 billion.

Those opposed to the location, including the Australian Greens, have called repeatedly for Browse Basin gas to be piped south to Woodside's existing North West Shelf facilities in the Pilbara region.

Others, including JP Morgan analysts, favour a floating liquefaction vessel, as Royal Dutch Shell plans for its Prelude LNG project in the state's far north, but Premier Colin Barnett says that model would not provide enough local jobs.

Environs Kimberley pointed to a November 5 JP Morgan research note that said a floating project could be competitive because it allowed the proponents to "offshore costs in the escalating Australian capex environment".

If the economics of the James Price Point scenario did not stack up for the joint venture partners, which include heavyweights such as BHP Billiton and BP, the state government may have to accept the floating or North West Shelf alternatives, JP Morgan said.

Environs Kimberley director Martin Pritchard said the state government had fixed its sights on James Price Point "based on politics rather than on science".

"And they have failed to properly consider social and economic impacts on Broome and the Kimberley," Mr Pritchard said.

"This proposal would be the biggest environmental disaster the Kimberley has ever seen."

The Wilderness Society labelled the state's environmental assessment process "a sham", pointing to the fact an Environmental Protection Authority report advising Mr Marmion to back the project was left to just one man, chairman Paul Vogel, after his four fellow board members abstained due to conflicts of interest.

Mr Marmion's approval was subject to strict conditions relating to the protection of whales, dolphins, dugongs, turtles and sawfish, dinosaur tracks, the involvement of traditional owners and native title claimants, and measures to address the risk of pollution from oil spills and air emissions.

Also today, Pew Environment Group said the Kimberley faced increased environmental threats from mining, including copper exploration at Horizontal Falls and a proposal for a new coal mine in the Fitzroy River Valley.