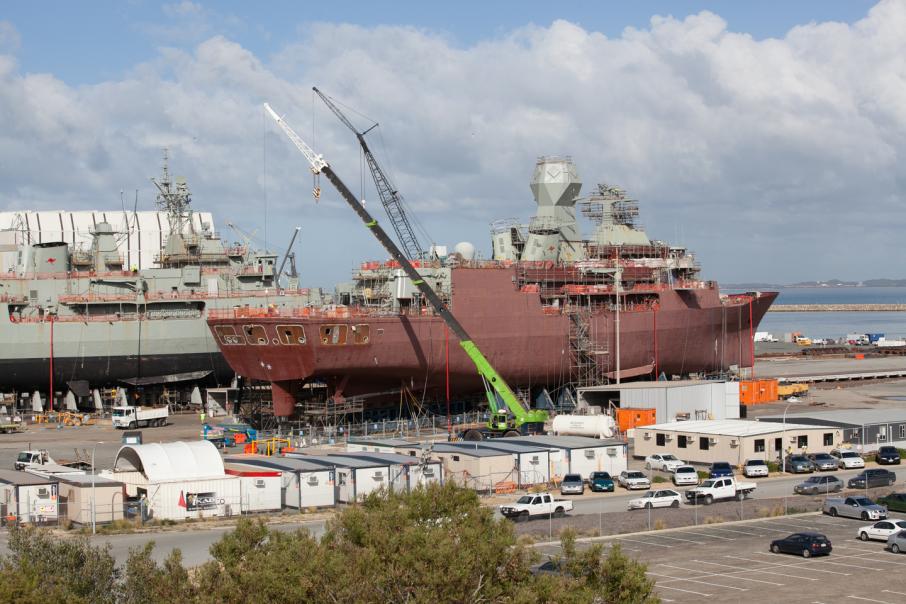 The proposal includes a wharf extension and the construction of a new finger wharf at Lot 804 Quill Way and Lot 4552 Henderson, lots owned by DevelopmentWA and leased by defence contractor BAE Systems Australia.

The proposal includes a wharf extension and the construction of a new finger wharf at Lots 804 and 4552 Quill Way in Henderson, lots owned by DevelopmentWA and leased by defence contractor BAE Systems Australia; which has a waterfront fabrication and load-out facility and a self-contained 14-hectare facility in the Australian Marine Complex.

Business News can reveal that SITE planning + design has been contracted by the developers; the state government’s land development agency DevelopmentWA and AMC Corporation.

The application surfaced on the website of the state government’s State Development Assessment Unit (SDAU) earlier this week, a body established to streamline the approvals process and expedite developments to assist with economic recovery in the wake of COVID-19.

But other than the site of the proposed development and its worth, little information on the proposal is currently public.

A Department of Planning, Lands and Heritage spokesperson told Business News the development was part of the state government’s investment in the upgrade of port infrastructure at the Australian Marine Complex in Henderson to prepare for the state’s future, create jobs and support economic recovery.

It is understood that the proposal will soon be referred to the City of Cockburn and other regulatory agencies, and is expected to be released for public consultation in the coming weeks; consultation that will inform the determination by the state’s development commission.

While not involved in the proposed expansion, a BAE Systems Australia spokesperson told Business News the company welcomed the proposal and that the investment and collaboration between industry and government would help position Western Australia for future, complex ship maintenance and upgrades.

"Major defence projects and the investment in critical infrastructure is a catalyst for economic growth, providing valuable jobs and opportunities for our Australian ecosystem of small and medium sized companies," the spokesperson said.

"Enhancing infrastructure and support services will improve the efficiency and effectiveness of ‘in water’ sustainment work and provide opportunities to accommodate higher sustainment volume’s within the AMC."

The lodgement of the application coincides with the beginning of construction on the complex’s new vessel transfer path, a project the state government pledged in July as part of its COVID-19 recovery package and one of four major infrastructure projects worth $87.6 million launched in a bid to help it secure the full-cycle docking submarine maintenance program.

The other projects include the wharf extension, a new shipbuilding facility and road upgrades; but it is not yet clear whether that wharf extension is part of this proposal.

The state government hopes to have the project completed by July, in time to support the launching of the Royal Australian Navy’s new Arafura Class offshore patrol vessels from September 2022.

The relocation of the program from South Australia to WA would see the state become responsible for all maintenance of Australia’s Collins Class submarine fleet, a responsibility that would also create 3,000 local jobs.

The state government has made its case to the federal government, extending an invitation to Prime Minister Scott Morrison to tour the complex and the work underway.

But the upgrades have been a contentious issue in recent years, with former defence minister Linda Reynolds having regularly said the federal government would not commit to shifting full-cycle docking to WA unless the state government proceeded with major upgrades to the facility.

It is not yet clear what impact, if any, the cabinet reshuffle and transfer of the portfolio to former Home Affairs Minister Peter Dutton will have on WA’s ability to secure the fleet.

In March, WA Labor separately pledged to create a strategic industrial hub between Henderson, Kwinana and Rockingham if re-elected, specifically as to encourage the state’s involvement in the batteries, hydrogen, renewable energy and defence industries.

No price was attached to the commitment, though, with the item seemingly not included as part of the party’s 214 campaign promises submitted to the Department of Treasury for costing.

There are currently no active tenders for a wharf extension and new finger wharf at AMC, according to the state government’s online portal.