The state government has opened expressions of interest to amalgamate the state’s data storage needs in the hope it will drastically reduce capital costs, Finance Minister Bill Marmion will announce today. 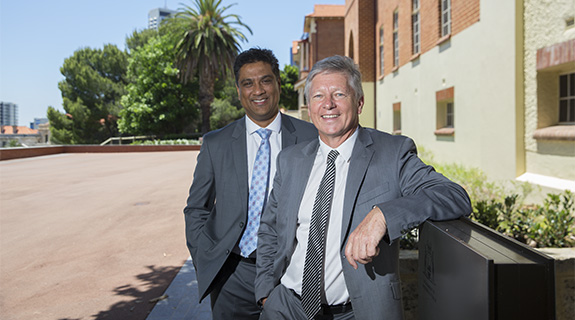 FIRST BYTE: Giles Nunis (left) and Bill Marmion are planning a series of IT savings measures.

The GovNext-ICT program was launched at an event with industry representatives and director generals from nine participating state government departments.

Mr Marmion told the event that the government plans to leverage economies of scale and become a consumer of data services from private businesses, with annual savings of up to $65 million.

A movement to private provision has been embraced by other governments around the world and there is no reason for the state government to continue to buy its own infrastructure, he said.

“We spend between 3 to 5 per cent per annum of the overall State’s budget on ICT, so it is imperative we get maximum value for taxpayers by leveraging our buying power and reducing duplication,” Mr Marmion said.

"GovNext-ICT is about paying only for what we use, moving away from owning and operating ICT infrastructure, so we can concentrate on delivering the business of government.”

It is the first major move of new state government chief information officer Giles Nunis, and forecast savings will be as much as $65 million.

With low asset utilisation of information technology infrastructure across a number of major departments, the government become consumer of ‘infrastructure and network as a service’, rather than a self-provider.

Private provision of data services will make better use of economies of scale, according to Mr Nunis, and will mean lower costs for the state government which currently spends around $300 million annually on IT capital costs.

“We want to move into the consumption world,” Mr Nunis told Business News.

“That means that industry provides the infrastructure and we basically buy the service from them.

“That infrastructure component comes away, we reduce our cost, but we’re also moving into the transaction world where we’re only paying for usage of our infrastructure.”

About 40 or 50 per cent of the government’s IT storage capacity is used, Mr Nunis said.

The move will be similar to buying electricity as a consumer, he said, where the average household does not buy the network or a generator.

Instead, private enterprise takes on the risk of owning the assets.

Mr Nunis said that, broadly, information technology costs should fall over time as technology improved, and the government should seek a framework to encourage that.

“I could set up a server on my phone, in Seattle, that doesn't cost me anything and there’s no human intervention,” he said.

“(But) today, if I want to set up a server in government, I’ve got to get someone to do that.

“(Yet) the technology is offering automated solutions.

He additionally pointed out that the changes had few similarities to the previous government’s Office of Shared Services.

That project attempted to amalgamate payroll and other functions into one place.

In this case, Mr Nunis said departments would keep their IT procurement contingents to develop service level agreements appropriate to their needs, while his office would set strategic direction for the government and negotiate a general contractual framework.

His will be a lean operation, with just 13 full-time equivalent staff

Mr Marmion said he hoped the contract would spark private investment in IT capacity in the state, contributing to it developing as a tech player.

There are already some moves in this space, with Fujitsu announcing a $10 million upgrade to its data facility in Malaga in May.

That would make the facility the first in Australian to attain tier four accreditation, with higher reliability and performance.

“For example, indications are that we can deliver an initial five-fold increase in internet speeds for our regional schools, with a potential 50-fold increase,” he said.