There’s little new or creative about either side’s approach to the state election campaign so far, with economic management, public transport and law and order front and centre. 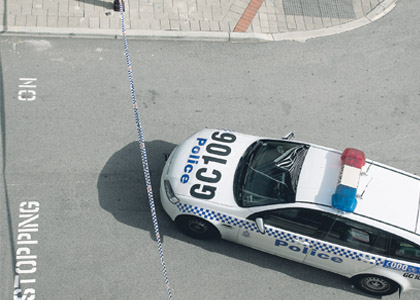 COP THAT: Both sides of politics have flagged law and order as a feature of their pitch to voters for the March 9 poll. Photo: Grant Currall

There’s little new or creative about either side’s approach to the state election campaign so far, with economic management, public transport and law and order front and centre.

IT didn’t take long for the battlelines to be drawn for the March 9 state election. Transport, including public transport and traffic congestion, and law and order surfaced almost as soon as Governor Malcolm McCusker fired the official starting gun by signing the election writs.

Both sides were into it, although there were some subtle early differences. The Liberals went for more mandatory sentencing and parking bays at railway stations, while Labor opted for more police officers and trains.

The good news, for the Liberals especially, was in Treasury’s preelection financial projections statement. The turnaround in iron ore prices has meant more royalties pouring into the coffers, with an improved budget surplus predicted this year, and the disappearance of the forecast deficit next year.

The relief on Treasurer Troy Buswell’s face as he explained the more optimistic budget position at a news conference was there for all to see.

Law and order promises are standard fare for state campaigns. ‘Tough on crime, tough on the causes of crime’ is a well-worn slogan. Neither side can afford to be branded as soft on crime, although Premier Colin Barnett has been quick to award that accolade to Labor.

That was because Labor was less than enthusiastic about his party’s promise to extend mandatory sentencing for adult home invaders convicted of committing serious physical or sexual assaults.

In this, however, Labor was not alone; the Criminal Lawyers’ Association and the WA Law Society also opposed the policy.

Labor leader Mark McGowan’s counter of 500 extra police officers is also standard fare. But it doesn’t satisfy the Police Union, which wants at least 800 more, while Mr Buswell says Labor’s cost estimate of an extra $162 million over four years is way too low.

“Well in excess of $200 million,” is the treasurer’s guesstimate.

One factor that became obvious with the publication of Treasury’s pre-poll figures is that the state’s revenue performance is essentially subject to factors beyond government control.

For example, the estimated income from royalties through to June 30 will rise by $149 million, thanks to higher iron ore prices. But the higher exchange rate works the other way, trimming mining revenue predictions by $37 million.

Then there’s the revenue estimates from the goods and services tax, which has become a financial disaster area. Western Australia is predicted to lose a further $745 million in GST grants over the next three years “due to the stronger outlook for iron ore royalties and weaker than expected revenue projections in other jurisdictions’ (states and territories) mid-year reviews”.

Noting that this has implications for WA’s triple-A credit rating, under-treasurer Tim Marney added, for the benefit of the Liberal and Labor parties: “This highlights the need to constrain expenditure growth in line with revenue growth, with an appropriate and significant surplus as a buffer against this volatility”.

That’s code for no extravagant promises, thanks very much.

It’s not always easy for campaigning politicians to come up with new ways of saying the same things, so phrases often get recycled, including by the other side.
Former Labor prime minister Paul Keating was noted for memorable phrases. In 1990, he described the December national accounts figures as a “beautiful set of numbers”. They were followed by two years of recession.

And when his government was on its last legs in the 1996 election campaign, he warned: “When the government changes, the country changes”.

Coincidentally, Mr Buswell last week described the Treasury update as “a good set of figures”. And Mr Barnett warned: “If you change the government, you change the state”.

They are good lines and worth recycling, regardless of who used them first.

INCUMBENCY is a wonderful thing, especially in politics on the eve of an election; and if you don’t make use of it you are considered very foolish indeed.

So last week, on the day before the issuing of the writs for the state election and the application of caretaker provisions across the public service, ministerial offices were working overtime pumping out their last official media statements.

Mr Barnett says the caretaker period ensures decisions are not taken that will bind an incoming government, or limit its freedom of action, and applies until the election result is known.

But there was almost a frenzy of activity before that rule took effect. Ministerial offices produced more than 20 media releases, most of which involved spending taxpayers’ money to benefit a range of communities across WA. A further 10 popped out on the morning Mr Barnett was due to see Governor McCusker about the writs.

They included two from Mr Buswell, which were posted after the 10am scheduled starting time for the Barnett-McCusker confab.

National Party leader Brendon Grylls was especially busy, with several releases directly affecting the north-west; these included $10 million for a common seawater pipeline supporting the expansion of the algae industry at Karratha, and the release of commercial land at Newman. They probably won’t hurt his attempt to win the seat of Pilbara.

Education Minister Peter Collier was active as well, with five media statements, coinciding with state schools opening for the school year. He opened several schools, but also announced that completion dates for new schools in Ellenbrook North and Forrestdale would be brought forward to 2017.

Of the 11 statements released on the morning of the writs, four each came through the offices of Deputy Premier Kim Hames and Mr Buswell. Dr Hames revealed the $32 million would be spent on “advanced medical equipment” for the new Fiona Stanley Hospital.

Mr Barnett also announced that $210,000 would go towards “culturally and historically appropriate shade structures” to add to the ambience of Broome’s Chinatown.

While the government was in full flight, only four statements came from the opposition leader’s office. Both sides will now be using their party resources to get their campaign messages out as part of the caretaker arrangements.

There is no guarantee the build-up to the official campaign start would be any different under a Labor government, but the events do reinforce the old saying that ‘winners are grin-ners and the rest can please themselves’.