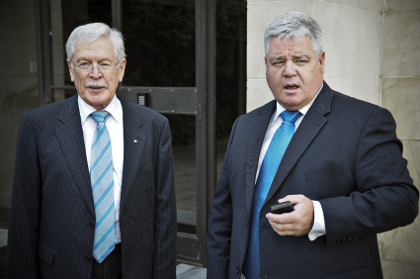 Mines minister Norman Moore said today he is “extraordinarily frustrated” after the state government withdrew its prosecution against US petroleum company Apache and its joint venture partners over the 2008 Varanus Island gas pipeline explosion.

The minister said Apache’s lawyers had “come across a technicality” that forced the withdrawal of the case, which was launched in May 2009.

He explained that it followed new information and evidence provided by Apache Northwest and its co-licensees, Kufpec Australia and Tap (Harriet) during the pre-trial proceedings.

“It seems in 1992 there was an amendment, or variation, made to the licence that applied to the Apache/Varanus Island facility, and part of the pipeline to that particular part of the facility had not been licenced properly,” Mr Moore told reporters.

“The variation referred to the pipeworks instead of the pipeline.

“The Apache lawyers found, in effect, part of the pipeline was not licenced, therefore they couldn’t be charged with not maintaining a pipeline in good shape when, in fact, there was no such thing as a licenced pipeline in the variation agreement they had attached to their licence.

“This follows the company’s continued litigation for about two years that hindered every effort by the state, including the joint state and federal governments effort, to thoroughly investigate this incident and publicly release findings.”

Mr Moore said the information was provided to state solicitors and, after four separate opinions, the advice was that the case could not proceed.

Despite dropping the state prosecution, Mr Moore said he was still unable to release any findings from the official report into the Varanus incident, which cut WA’s gas supplies by 30 per cent, until after it had been disclosed to Apache.

However, he added that Apache may not yet have entirely avoided legal action over the incident.

“That does not mean they will necessarily get off scot-free,” Mr Moore said.

“As you will be aware there may well be civil litigants in the community that will take action against Apache on the basis of losses incurred when the explosion happened.”

Mr Moore said the wording of the licence would also now be amended to avoid a repeat of this situation in the future.

An Apache spokesperson told WA Business News the company had no further comment to make following today’s court decision to dismiss the case.

The Minister’s statement is pasted below:

The State Government’s prosecution case against Apache Northwest Pty Ltd and its co-licencees, Kufpec Australia Pty Ltd and Tap (Harriet) Pty Ltd has been withdrawn following a discontinuance being granted in the Magistrates Court this morning.

Mines and Petroleum Minister Norman Moore said he was extremely frustrated that the case could not proceed and was angry that the company was able to avoid facing the Magistrates Court in regard to the alleged offence because of what he believed to be legal technicalities.

The Government’s case related to the Varanus Island pipeline explosion and the company was charged with ‘failing to maintain a pipeline in good condition and repair’.

The Minister said the Department of Mines and Petroleum’s decision to discontinue the prosecution was made in response to new information and evidence provided by Apache Northwest and its co-licensees during the pre-trial proceedings.

“After extensive consideration and advice from Western Australia’s State Solicitor’s Office as well as the Independent Bar, it was decided that there was no reasonable prospect of success for the State to prove two essential elements of the prosecution,” Mr Moore said.

“This included the State being able to negate the statutory defence that the company’s senior executives did not hold ‘the honest and reasonable but mistaken belief’ that the section of the pipeline in question was ‘in good condition and repair’.

“It was also considered that there was no reasonable prospect the State could prove the section of the pipeline which ruptured was licensed under the Petroleum Pipelines Act 1969 due to a technicality in a variation document from 1992. The variation used the terms ‘pipeworks’, rather than ‘pipeline’.”

The prosecution, launched in May 2009, was related to the pipeline explosion incident at Varanus Island on June 3, 2008, which cut WA’s gas supplies by 30 per cent.

“This follows the company’s continued litigation for about two years that hindered every effort by the State, including the joint State and Federal governments effort, to thoroughly investigate this incident and publicly release findings.”

Mr Moore said despite the discontinuance of the State prosecution action, he was still unable to release any findings from the Offshore Petroleum Safety Regulation - Varanus Island Incident Investigation Report by Kym Bills and Dave Agostini.

“In July 2009 I was required to give an undertaking to the Supreme Court that I would not publish the report, which includes releasing any findings of the report, until I had afforded Apache Northwest a reasonable opportunity to be heard in relation to any adverse comments in the report,” he said.

“While the State was pursuing the prosecution, I was reluctant to release any findings from the report, as I had a responsibility to ensure the State’s prosecution case was not jeopardised by any further court action from Apache Northwest.

“I will now be providing a copy of the report to Apache and, once I have met my legal obligations, I will be better positioned to share this information once I have received the company’s response.”