State budget saves for the future 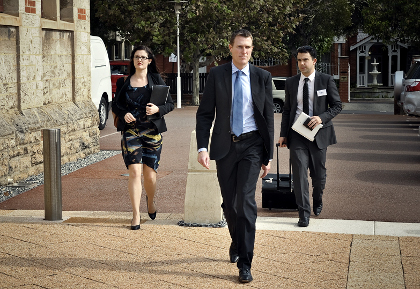 The creation of a $1.1 billion Future Fund, a major shift in capital works priorities, tax breaks for small business and a slim surplus are the major features of the state government budget announced today.

The Future Fund will get a big kick-start with $1.1 billion of “seed funding” by 2015-16, using money that has not been spent on the Royalties for Regions program (see accompanying article.)

The highlight of the capital works program is a commitment to spend $428 million on a new museum, which adds to big spending on new, central city projects like the major stadium, the Waterfront and City Link (see accompanying article).

The government has forecast a budget surplus of $196 million next financial year, as a result of a sharp slowdown in revenue growth.

”It’s not a huge surplus but it’s a safe surplus,” treasurer Christian Porter told journalists in the budget lock-up.

Government revenue is projected to grow by just 2.9 per cent, partly from a sharp drop in transfer duty as a result of the weakness in the housing market.

The budget also features modest increases in electricity tariffs, up 3.5 per cent, and water charges, up 6 per cent, following growing political pressure over household charges.

Spending is projected to grow by 4.2 per cent, after taking account of the previously announced efficiency dividend that requires departments and agencies to find savings.

“Recurrent expenses growth is okay," Mr Porter said. "It could be better and we’re working on it.”

Mr Porter argued that the government was adequately managing state debt, which has risen rapidly in recent years.

In contrast, the mid-year review, released in December, had projected continued growth in net debt to a peak of $23.9 billion.

Mr Porter said that at a time of rapid population growth, increased pressure on infrastructure and a falling share of GST grants from Canberra, the government had done well.

Small business wiill benefit from $135 million of payroll tax relief, as announced earlier today prior to the budget.

A general rebate, worth $128 million, will apply to small businesses with Australia-wide group payrolls up to $1.5million in the 2012-13 financial year.

They would receive a full rebate of their WA payroll tax liabilities, with a maximum value of $41,250. The rebate would gradually phase out for small businesses with payrolls between $1.5million and $3million.

The government is also introducing two new ongoing payroll tax relief measures aimed at encouraging the employment of people with a disability, or of Aboriginal or Torres Strait Islander descent.

Mr O’Brien said from July 1, 2012 businesses would be exempt from payroll tax for wages paid in the first two years of employment of new employees with a disability for whom they receive a Commonwealth Disability Employment Services wage subsidy, or who were eligible for any form of Western Australian Disability Services Commission support.

Labor Leader Mark McGowan said the government had failed Western Australian families, which were expectig significant relief after three and a half years of massive increases to the cost of living.

“Since 2008, the Barnett Government has ripped an extra $1050 from the average household," he said.

“In this budget, they have increased charges by an extra $163.”

Mr McGowan said that while the relief payments to one third of WA households were welcome, it was clearly not enough to ease the significant cost of living pain imposed by this Government.