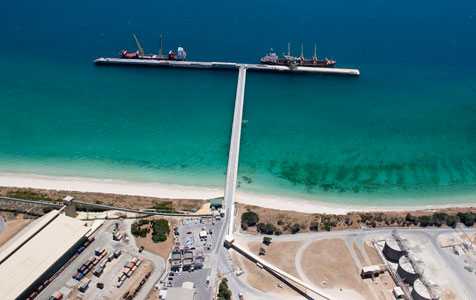 The state government has split the advisory roles for the first tranche of its asset sales program as it starts a sell down process that it hopes will relieve its difficult budget position.

Premier Colin Barnett and Treasurer Mike Nahan announced a joint venture of Rothschild and Deloitte would advise on the Kwinana Bulk Terminal and Utah Point Bulk Handling Facility port asset sales, while and a team from the Perth office of Ernst & Young, which provided the original advice to the state on the asset sale process, is to "support" the sale process for the Perth Market Authority.

Rothschild doesn't have a permanent presence in WA but advised the Queensland Government on its US$17.6 billion asset sales program.

Mr Barnett said in a statement that the appointments followed a competitive tender process, which included high-quality proposals from a number of multinational financial organisations.

Dr Nahan said the Rothschild and Deloitte partnership had local port experience and demonstrated success with national asset transactions, while Ernst & Young had knowledge of the Perth Market Authority and hands-on experience in advising on similar market assets in other locations.

The lead financial advisers will be involved in all phases of the sales process, including project planning, detailed due diligence and execution of the sale if the assets are ultimately approved by State Cabinet for divestment.

"Asset sales can also provide broader benefits such as introducing private sector discipline and competition, which places downward pressure on prices and improvements to service," the Treasurer said, two days after delivering his mid-year review of the 2014-15 state budget which has resulted in increased payroll tax bills and further cuts topublic sector spending .

"The abundance of, and access to, private capital means it is also better placed to finance asset expansion and upgrades sooner, delivering greater levels of efficiency and productivity."

The government said it was considering further assets for potential divestment as part of the 2015-6 budget process.