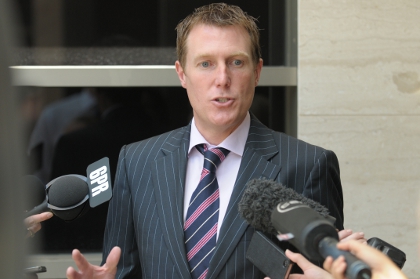 State government agencies and trading enterprises will be required to cut spending and freeze their staff numbers after the state blamed cuts in GST grants for a tough budget outlook.

Treasurer Christian Porter also confirmed plans to defer spending on a range of unnamed capital works projects to ensure it maintains a budget surplus and limits growth in state debt.

“To ensure the State finances remain in surplus, the Liberal National Government has had to make the strong decisions and commit to finding savings inside the state budget.”

Mr Porter insisted there was plenty of scope to cut spending without adversely affecting service delivery.

“Hunting for waste inside the public sector is very fertile ground at the moment because for eight years under the previous government there was never any savings,” Mr Porter told journalists today.

Citing the example of government utilities spending too much money on corporate boxes at the football, he said the success and relative ease of previous ‘efficiency dividends’ indicated there was still plenty of scope to find savings.

First, public sector agencies will have to achieve an efficiency dividend from 2012-13, starting at two per cent for all departments (one per cent for education), with additional one per cent dividends to be achieved in each of the three financial years to 2015-16.

Third, a two-year freeze will be applied to the growth in the number of public sector workers, except frontline services in police, education and health.

This measure will require all departments to operate for the next two financial years inside their full-time equivalent (FTE) staffing cap as it was set in 2011-12.

“These initiatives are designed to guarantee the WA taxpayers that public departments are operating efficiently with as little waste as possible,” Mr Porter said.

He said the measures were a necessary response to the reduction in Western Australia’s share of GST grants.

“Our State is now suffering an unprecedented reduction in funding at the hands of the Federal Labor Government with confirmation last week that WA’s share of GST grants would be slashed from the already low 72 per cent to just 55 per cent in 2012-13.

Shadow treasurer Ben Wyatt said the Barnett government only has itself to blame for the state of WA’s finances, because it had failed to contain spending growth.

Mr Wyatt said despite an increase of close to $6 billion in general public sector revenue, the Barnett Government had continually failed to meet its own expense targets.

“These increases were all significantly above the budgeted expense growth..