Christian Urry is looking to change the business model in the swimming education sector. 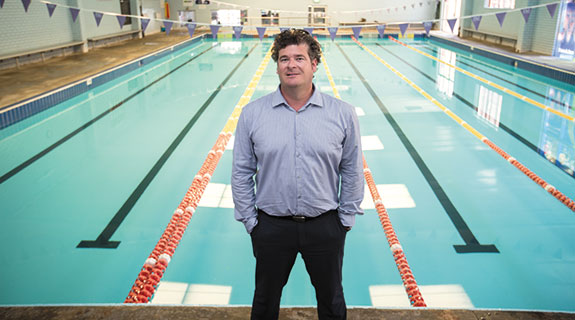 ON THE BLOCKS: Christian Urry at the East Fremantle centre he bought from Kevin Duff in the 1990s, one of State Swim’s oldest centres and its HQ. Photo: Attila Csaszar

Christian Urry is looking to change the business model in the swimming education sector.

His father, David Urry, was the 1974 Commonwealth Games national swimming coach and quite literally wrote the book on learning to swim, before starting a business teaching the skills in Adelaide.

His son learned the skills first hand as a young swimming teacher in the family business before moving to Western Australia to establish State Swim at Hillarys, under the watchful eye of another well-known swimming legend, Kevin Duff, the Australian coach in 1973.

Now, after two decades in Perth, Mr Urry is changing the swimming school business model (just as his father led the way in restructuring how children learned to swim).

In a sector very much regarded as a cottage industry, State Swim has emerged from the field as a corporate player, with 12 centres in three states, employing more than 100 full-time equivalent jobs and turning over between $14 million and $15 million.

It also manages a property empire worth $22 million and a budding software division, UDIO Systems, developed in-house to service State Swim and its franchisee operations but soon to be marketed to other businesses that require similar customer booking processes.

Mr Urry believes he has the structures in place to manage a bold expansion plan, based in part on franchising and backed by private equity to grow the business to 50 outlets across the country by 2025.

“If you have a business that relies heavily on you, when you go on holidays or something happens to you, the business comes to grinding halt; that is not a good business,” Mr Urry said.

“It has to be a tough and robust business. To maintain that you need a bit of size.”

To date, most of State Swim’s progress has been self-funded; a steady approach that has ensured the business has managed to cope incrementally with growth.

“It has been a slow process to grow that way,” Mr Urry said.

The exception to that rule was the development of pools in Melbourne, which were funded by a syndicate. That arrangement is ending as State Swim embarks on buying out those investment partners, but the experience was invaluable in terms of preparing the business for the next part of the journey.

“We are about to go out and get some private equity to build some more centres,” said Mr Urry, who believes that access to external capital is vital to accelerate the group’s expansion.

Depending on factors such as size and land ownership, a typical pool costs about $2.5 million to develop, he said. For each stand-alone development, State Swim was seeking to raise half that sum from investors and planned to fund the rest with debt.

But the company does not have a one-size-fits-all approach.

It has established each centre as a franchise from a management perspective; however only two pools have actual franchisees, an arrangement that started with Osborne Park five years ago.

Furthermore, while most centres are on company-controlled land with a pool (usually 20 to 25 metres), State Swim’s most recent operation in Kwinana is within a bulky goods retail complex and is half that size, a model that provides a lot more flexibility.

Mr Urry believes this smaller option will be attractive to other retail shopping centres and will give State Swim the ability to enter areas otherwise too expensive to buy into, such as Perth’s inner-city suburbs.

Having operated the Kwinana pool in-house for most of this year, Mr Urry is looking for a franchisee. He said the franchise pricing was designed to make the proposition attractive to a good operator but ensured they had some skin the game.

“We don’t want to burden the business with debt from day one,” Mr Urry told Business News.

“We can get people into the business for a low cost, but not so low that if it doesn’t work out they can walk away.”

Mr Urry said the franchisees did not necessarily have to be swimming instructors. He said the State Swim system would help them overcome many of the business and administrative issues unique to the sector, which was highly sensitive to public standards.

He said many people looking at the industry misunderstood how complex it was.

The biggest competitive challenge has been council-owned leisure centres, which are widespread in WA but, Mr Urry said, much less prevalent on the east coast, where State Swim’s biggest expansion plans were focused.