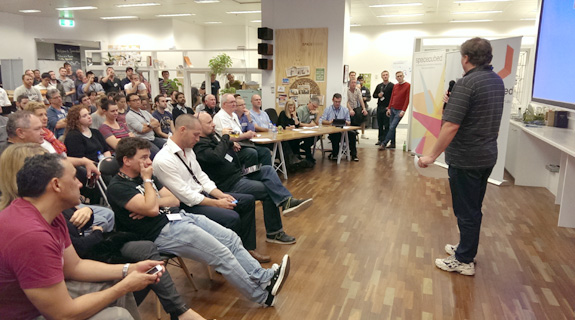 Unearthed is a 54-hour long event during which programmers tackle productivity problems presented by some of the state’s major mining companies. Photo taken from May 2014 event.

Two years after the US-based Founder Institute came to Perth to accelerate the growth of startups, a local not for profit has announced it’s launching its own accelerator focused on technology in resources.

The Resource Innovation through Information Technology (RIIT) organisation is the team behind the Unearthed event, held in May.

Unearthed is a 54-hour long event during which programmers tackle productivity problems presented by some of the state’s major mining companies.

This year’s event had support from both BHP and Rio Tinto, which provided real data from their mining operations for programmers to come up with solutions.

RIIT has announced the event is now being expanded to include Brisbane, Sydney and Melbourne in 2015.

In addition to the expansion, an incubator is being launched in Perth in an effort to further the progress of developments that may come out of the Unearthed events.

RIIT director Justin Strharsky said while great ideas emerged from the Unearthed events, commercialisation was the next step.

“One of the things that we see is that there a lot of these types of events … where good ideas get developed and prototypes happen but there’s very little to support those prototypes or new companies in the next phase of their lifecycle,” Mr Strharsky told Business News.

“So that’s what this accelerator is designed to do … when we’re running at full capacity we should be bringing 10 new companies to the market every year.”

The accelerator program will run for six months and connect the new startup companies with industry mentors and customers.

Participants will each receive $70,000 in seed investment to market the products to the resources sector.

The first startup confirmed as an accelerator participant is Newton Labs, which received the top prize in the inaugural Unearthed in May.

Its monitoring system works to detect oversized boulders in hard rock mining operations, which are estimated to cost the industry $100 million in downtime annually.