A trauma surgeon and a former manager at Nokia are looking for funding to produce a WA-designed ‘black box’ for cars. 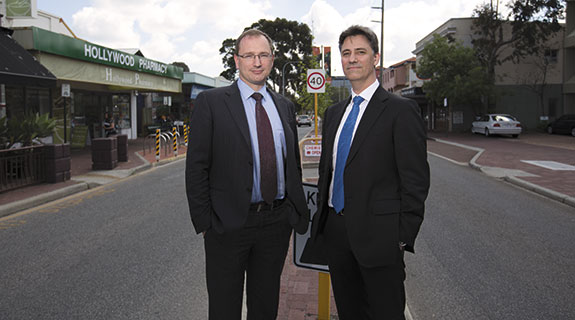 A trauma surgeon and a former manager at Nokia are looking for funding to produce a WA-designed ‘black box’ for cars.

A Western Australian company is looking to tap the European market with a device to help emergency services respond more rapidly to road accidents and potentially reduce fatalities.

IMR Technologies is the brainchild of trauma and emergency surgeon Adam Boyt and former engineering manager at Symbian-Nokia, Martyn Gilbert.

Both lost friends in road accidents on country roads who could potentially have been saved by faster response times, sparking them to develop the technology.

The equipment they have designed acts like a black box (used in planes) or Epirb (emergency position-indicating radio beacon, used in boats), but for cars.

In the event of an accident, it will automatically alert authorities through the mobile phone network or via satellite.

IMR will join a number of global companies that have sought to develop similar products for the European market.

“It tells the authorities where the incident is, and basic information about the accident,” Dr Boyt said. “It will have information on the number of passengers … it can give updates if the location of the vehicle changes.”

That helps emergency services know what resources, and how many responders, to send to an accident.

In Australia, there could be wide applications for new cars, of which there are about a million sold annually, for mining, in agriculture and, particularly, in regional areas.

The biggest potential market would be in the European Union, IMR said, which has legislated that all new vehicles must have an e-calling device from March 2018, a move the EU estimates would save 2,500 lives.

For that purpose, it would mean more than 12 million such devices would be sold for new cars annually, while there are almost 250 million cars, which could be retrofitted.

International companies are targeting the market, including Fujitsu, while Mercedes has recently announced a similar product.

But Mr Gilbert claimed that many of the companies that had attempted to enter the market had failed in testing.

Around 30 such businesses pitched products in a competition in Germany in 2013.

IMR said it had negotiated with car manufacturers, some of which would be looking to outsource the soon-to-be compulsory technology.

There would also be opportunities to work with insurers to reduce premiums through use of the box.

IMR, which has been funded by the founders, wants to raise about $1 million to take the units into production.

The company has been in discussions with private investors.

“To get into the European market requires extra capital,” Dr Boyt said. “There’s a window of opportunity for Europe.”

IMR plans to manufacture the equipment in Adelaide, and has been in discussions with a South Australian company.

Dr Boyt said IMR would try to keep it an Australian company, despite manufacturing being cheaper in China.

“With the exchange rate coming down, labour costs are less in Australia … half the price that they were a few months ago, which makes it more competitive,” he said.