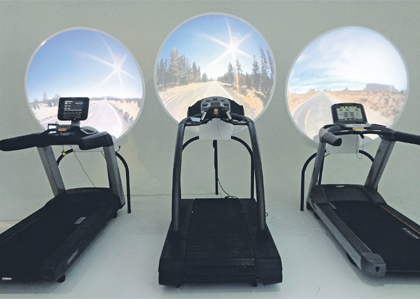 ON THE MOVE: The key technology for the Zone Dome, a three-dimensional screen for treadmills, was created by Paul Bourke from UWA.

IS it just pure globalisation or proof that there is a clear evolutionary pathway for business in Perth beyond the resources sector?

Last month, Running Unlimited launched its Zone Dome three-dimensional screen for treadmills, ending the first phase of the commercialisation of a product that has taken nearly three years since it was little more than a thought bubble.

On the surface there is little that is obviously Western Australian about Zone Dome.

The company behind the video product is UK domiciled, the concept was exhibited in Europe, and the first 10 machines off the production line have been sold in Britain.

Even former marketing consultant Kevin Hewitt, who claims the idea as his brainchild, has an English accent that belies the years he has spent out of the country.

Mr Hewitt, though, is one of several key strands of this story which brings it back to Perth, where he has been a resident and business owner for years.

In addition to that: one of his two business partners Richard Evans is from WA; the key technology behind the 3D vision was created by a local expert from the University of WA; and the fundraising effort for the next part of the venture is being driven out of Perth by boutique advisers Mac Equity Partners.

Even the specialist footage needed to feed these machines is being managed by an export to Hollywood.

Mr Hewitt, who sold out of Western Australian-based Capitalis a few years ago, said the idea of creating a running-only gym in a room with a 3D projection around the walls first came to him while he was sitting in a Middle Eastern airport lounge longing to do some extra training for an impending marathon.

“Like a lot of runners, I thought I had not trained enough,” he said.

“I was consulting, constantly travelling and constantly sitting in airport lounges with wifi.

“I wanted to go for a run but I couldn’t.

“I then wondered what this running only gym would look like.”

Having broached the idea with his friends and now business partners at London-based Running Unlimited, Mr Evans and Caroline de Mowbray, Mr Hewitt said he went straight to the internet looking for expertise in the field of 3D projection.

He contacted two people, one in Frankfurt and one in New Mexico, who recommended he speak to academic Paul Bourke, the acknowledged leader in this area of research.

Mr Hewitt said he went to set up a Skype call and found Mr Bourke was in the same time zone.

“It turned out he was in Perth,” he said.

“Paul had basically gone to the world with a projection methodology that was a convex mirror that fills the dome.

“The only other way you could do it before was with incredibly specialist lenses.”

Mr Bourke led them to experimental work involving a whole room, which was being undertaken by various institutions and companies, including the CSIRO.

However, an early test of the idea raised a big obstacle. Such a room would require the largest potential market - existing gyms - to change their business model.

Mr Hewitt said the group went back to the drawing board and developed a 3D screen that was much smaller than the previous minimum size so that it could be attached to treadmills or other equipment in an operating gym.

He said interest has been significant and the company was already involved in licensing deals that incorporate both the domes and special footage required to work in 3D, which itself is another form of intellectual property with significant commercial potential.