The future of Karratha’s $70 million DoubleTree by Hilton proposal appears to be tied to the health of the Pilbara economy, with the hotel’s developer forced to redesign the project to finalise a suitable construction financing deal. 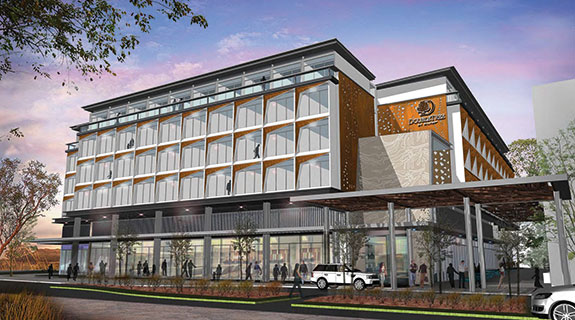 CONCEPT: The developers are having to rethink this design for the Karratha DoubleTree by Hilton.

The future of Karratha’s $70 million DoubleTree by Hilton proposal appears to be tied to the health of the Pilbara economy, with the hotel’s developer forced to redesign the project to finalise a suitable construction financing deal.

Construction had been scheduled to begin by the middle of the year, before Mr Marra’s comments were made in documents obtained by the state opposition under Freedom of Information laws.

However, Greg Devine, director of Ramtron’s would-be joint venture partner, Griffin Group, which has a deal in place to take a 60 per cent stake in Ramtron for $6 million if the project goes ahead, told Business News he believed the project was still alive and well, despite Mr Marra’s claims.

Responding to Labor questions in parliament last month, Lands Minister Terry Redman said he was confident that Ramtron would be able to close a suitable financing deal to enable the development to proceed.

Inquiries by Business News have revealed delays in securing finance for the hotel were largely the result of the negative view currently taken by commercial valuers of the prospects for property developments in the region.

Should it go ahead, the DoubleTree by Hilton is to be built via a modular construction method developed by Chinese construction and manufacturing conglomerate CIMC Building Solutions.

CIMC has also been contracted by Malaysia-backed SKS Group to build two other DoubleTree by Hilton hotels, at Barrack Square adjacent to Elizabeth Quay and at James Street in Northbridge, using the same construction techniques.

CIMC has built 15 hotels in the UK and Europe and a 300-room student accommodation project in the Northern Territory using its techniques, however, its executive general manager, John Zendler, told Business News Australian banks were reluctant to provide finance for modular construction.

Mr Zendler said CIMC had been forced to play the role not only of builder, but also project financier to make sure the hotels got off the ground.

“If you want to play in this space and you want to be a supplier of modules for big buildings, you’d want to make sure you’ve got a pretty epic balance sheet behind you,” Mr Zendler said.

“Otherwise you will design a wonderful building and it will get as far as a credit committee at a senior debt level bank and fall over.”

Mr Zendler said there had been no problem setting up a suitable financing deal for the Perth hotels, but the uncertainty surrounding Pilbara markets made the Karratha hotel a challenging proposition.

“We’re providing the funding on that project, but like any senior debt when you go to the bank, they are going to go to CBRE, Savills, Colliers International or whoever and get a detailed valuation,” he said.

“That’s a challenge in the north-west across the board at the moment, because when they provide a valuation for first mortgage purposes they are taking a very conservative view of the Pilbara.

“That’s going to be a challenge moving forward for Pilbara developments.”

Mr Zendler said CIMC was currently assisting Ramtron in redesigning the hotel to ensure it would not only stack up financially, but also create the statement in the Pilbara that LandCorp was aiming for when it contracted the developer to build the hotel adjacent to its The Quarter town centre project.

“All the right ingredients are there; you’ve got Hilton, you’ve got LandCorp being very supportive, but funding a hotel, getting senior debt for a hotel is challenging at the best of times,” Mr Zendler said.

“Getting hotel funding for a project in the Pilbara at the moment, it adds another layer of complexity to it, predominantly around the view that valuers are taking in the Pilbara.

“The challenge there is we are having to go back and reinvestigate the design to try to design a building that the valuation is not going to kill off.”