OPINION: Paul Papalia’s task to increase local, national and international tourist numbers and spending remains a work in progress, but signs are positive. 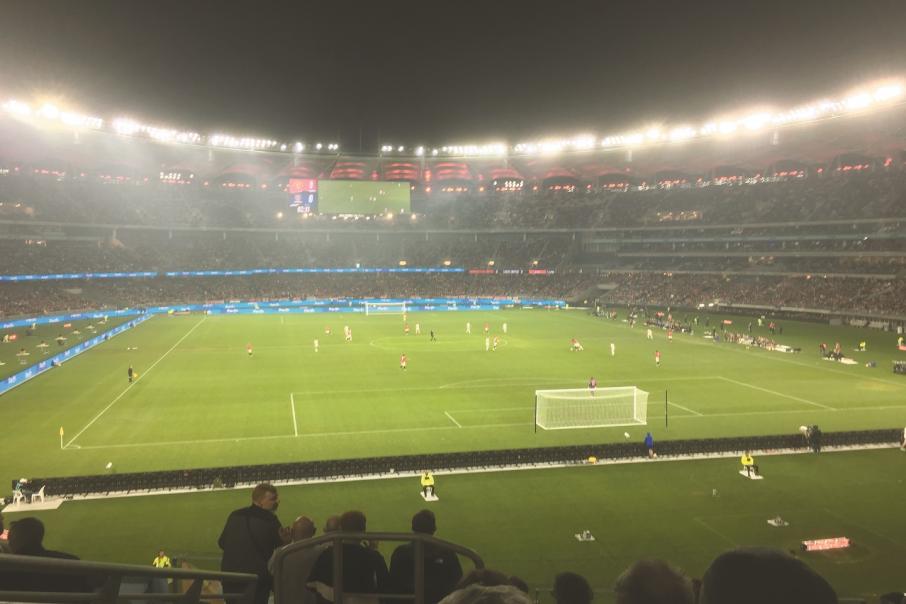 Major sporting events at Optus Stadium have proved a drawcard for visitors from across Australia and overseas.

OPINION: Paul Papalia’s task to increase local, national and international tourist numbers and spending remains a work in progress, but signs are positive.

Mr Papalia was assigned Western Australia’s tourism portfolio two years ago to breathe new life into a lagging area of the state’s economy.

And while there are clear signs he is delivering, the big question is whether he can keep it going.

In recent weeks, Perth has hosted a State of Origin Rugby League clash (tailored for viewers in the east coast market) and soccer matches involving the Manchester United and Leeds United clubs, which were clearly aimed at British fans.

That’s on top of the Hopman Cup singles and mixed doubles tennis tournament, at which Roger Federer has been the international drawcard in recent years.

A fixture on Perth’s summer sports calendar for 31 years, the Hopman Cup will be replaced next January with the inaugural ATP Cup, a men’s-only event Tennis Australia predicts will bring more sponsorship and visitor revenue that its predecessor.

The last time tourism enjoyed a comparable profile was in the closing years of Richard Court’s coalition government when supermodel Elle Macpherson was contracted to record a series of television commercials featuring WA’s major visitor attractions.

Ms Macpherson filmed eight ‘Brand WA’ commercials in 1997 highlighting attractions such as the Tree Top Walk in the South West, Ningaloo Reef in the Gascoyne, and Bungle Bungle Range and Cable Beach in the Kimberley. She returned the next year to film a promotion featuring the Goldfields.

The initial six-week advertising campaign in Britain was said to have attracted almost 6,000 extra visitors and generated spending of about $7.3 million, representing a 500 per cent return on the advertising cost. British tourists flocked to WA over the next 12 months in record numbers.

Tourism became a poor relation during the resources boom in the first decade of the new century. Hoteliers didn’t mind because accommodation was fully booked by resources companies, but when the boom sagged, attention turned to tourism to pick up the slack.

Enter Mr Papalia. His job was to revive interest in WA from the interstate and overseas markets, both to inject extra dollars into the economy and provide thousands of new jobs in the hospitality sector. The signs so far are positive.

Ironically, the focal point of the improved tourism figures is Optus Stadium, the construction of which was criticised during Colin Barnett’s term as premier due to the state’s deteriorating financial position and high cost, coming off the back of the resources boom.

According to Tourism Research Australia, domestic travellers (those from within WA and elsewhere in Australia) spent $7.8 billion in WA in the year to March, almost 25 per cent more than the previous year.

Domestic visits were up a healthy 10 per cent.

But there was a marginal drop in overseas visitors and the amount they spent. Mr Papalia hopes to rectify this with more direct flights to Perth. Japan’s ANA airline is about to launch direct flights from Tokyo, for example.

Given this, and the improving budget position, Treasurer Ben Wyatt should dump the surcharge imposed on foreign buyers of Perth real estate.

In fact right now the property market would welcome a stimulus from any sector, and scrapping the surcharge would almost certainly produce a modest, but still welcome, boost.

The opposition's tourism spokeswoman, Alyssa Hayden, was stating the obvious when she called on the government to ensure that more big events are staged at Optus Stadium. Clearly the West Coast Eagles will be hoping to play AFL finals matches there, and Pakistan and New Zealand will feature in international cricket fixtures in summer.

While the government is keen to trumpet the estimated extra spending thanks to its tourism initiatives, it is reluctant to reveal the payments and concessions required to lure the attractions west. This form of ‘commercial confidentiality’, fraught with risks for those involved, is apparently fit for public servants’ eyes only.

The tourism surge has coincided with a marginal improvement in WA’s jobs market, although unemployment is 5.8 per cent, compared with 5.2 per cent nationally.

With the next election now 20 months away, the challenge for Mr Papalia is to maintain the tourism momentum and avoid a repetition of the post-Macpherson slump – the more interstate and overseas visitors, spending big dollars, the better.

Mr Papalia’s assignment is still a work in progress.