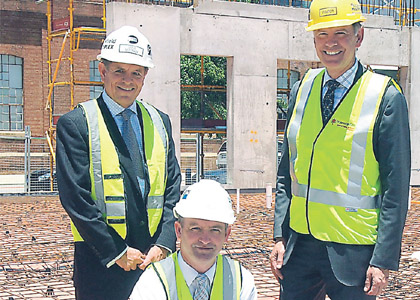 ST John of God Health Care chief executive Michael Stanford has no hesitation in naming the single most important factor in his ability to achieve successful outcomes on the group’s construction projects.

“We have a policy that for any project worth more than $2 million, we always appoint an independent project director,” Dr Stanford said.

“That is the single most useful thing that we can do, and we spend a lot of time thinking about how we can appoint them and what we expect them to do.

“We’ve managed every project over the past 11 years, on-time and on-budget, and they, more than anything, have been the key to that.”

Dr Stanford’s main focus is running hospitals but he and his colleagues at SJOG have accumulated plenty of experience working on construction projects.

“The reality is there has almost never been a hospital I’ve been involved with that hasn’t been planning its next expansion or refurbishment, so it is part and parcel of being an operator,” he said.

“Though the scale of these is unusual for us, in fact, we think our Murdoch expansion is the largest private sector hospital expansion anywhere in Australia.”

SJOG has three major construction projects under way in Western Australia, and is planning a fourth.

At the same time, the state government has a massive capital program of its own, notably the Fiona Stanley Hospital, the New Children’s Hospital and projects in Kalgoorlie, Albany, Bunbury and elsewhere.

Private company Ramsay Health Care is finalising a major expansion of the Joondalup Health Campus and research groups like the WA Institute for Medical Research have their own building program under way.

“This is an extremely unusual time in the history of the WA hospital sector; that so much is being built at one time,” Dr Stanford said.

While the volume of work has gone up, there are only a handful of construction companies with capacity to handle the large and complex projects under way.

In fact, Brookfield Multiplex and John Holland have won virtually all of the very large health-care projects under way in Perth.

The main challenger has been Doric, which won contracts at Busselton and WAIMR.

Dr Stanford said SJOG had spoken to some of the big east coast builders about bidding for WA projects but none had taken the plunge.

“If you haven’t got a base here, it’s hard to create that base and it’s hard to convince people that you’ve got the horsepower to fulfil the contract.”

He said the same issue applied in other disciplines, such as architecture and project management.

Teaming up at Midland

The campus is being developed as a public private partnership and will consist of a 307-bed public hospital and a 60-bed private hospital.

SJOG teamed up with Multiplex for the project, while competing bidder, Ramsay Health Care, had linked up with John Holland.

Its second major project is a $195 million expansion of its Murdoch hospital, which will nearly double its capacity.

For the Murdoch project, Multiplex won the work in a competitive process.

“It was an open tender that they had to win and we took very seriously the bids from others,” Dr Stanford said.

An innovative aspect of the Murdoch project is the inclusion of a five-storey, 11,000-square metre medical centre with consulting rooms for doctors.

SJOG has chosen to offer the consulting rooms on a strata title basis and has attracted keen interest from doctors who will be working at the Murdoch hospital and the neighbouring Fiona Stanley Hospital.

More than 100 doctors are expected to work from the medical centre and the proceeds from the strata sales will reduce the net cost of the project.

SJOG’s third project, nearing completion, is the $36 million construction of a cardiac centre and expansion of its cancer centre in Bunbury.

This was awarded to local company Perkins Builders. The group is also in advanced planning for its next development - the construction of a $50 million, 75-bed hospital at Mandurah.

“We’re doing the final feasibility study for that but we’re hoping to start construction around this time next year and to open in mid-2016,” Dr Stanford said.

This development would put SJOG in a good position in 2018 when the state government is scheduled to reopen tenders for running the existing Peel Health Campus.

The all-important project directors for SJOG’s two big developments are Project Directors Australia (at Murdoch) and NS Projects (at Midland).

To ensure strong accountability, Dr Stanford said the chief executive at each hospital is responsible for their development.

They utilise a “very sophisticated” and detailed project management manual that the group has written and refined over the years.

An added layer of project control has come from the employment of an internal project manager, who is the interface between SJOG and the projects. Dr Stanford said this person combined knowledge of SJOG’s business with technical understanding of each project.

In addition, key executives such as Dr Stanford and his chief financial officer retain oversight of the projects.

He believes another important factor in project success is the selection of other specialists, including architects, town planners and traffic planners.

Experience in the health sector and knowledge of local communities were key factors.

“We wouldn’t appoint people who don’t have experience in the health space,” he said.