AS the credit crunch hits real estate investment trusts, the spotlight has turned to the strength of Victorian-based Becton Property Group, which has a number of holdings in the central business district - including a stake in 111 St Georges Terrace. 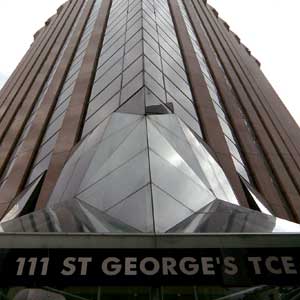 AS the credit crunch hits real estate investment trusts, the spotlight has turned to the strength of Victorian-based Becton Property Group, which has a number of holdings in the central business district - including a stake in 111 St Georges Terrace.

Last week, the future of Becton hung in the balance as the company sought to find a financial white knight and its shares remained suspended.

However, it has described the Perth office market - where it has four major holdings - as strong.

Apart from a 33 per cent stake in the former Axa Centre, valued 18 months ago at $91.7 million, Becton's various entities have interests in three other strategic sites in the city centre and West Perth which all came into the group with the takeover of Glenmont Properties syndicate in 2004.

They include the eight-storey Transport House in the Citiplace precinct, last valued at $25.7 million, the Perth Clinic site, two interconnected three-storey buildings in West Perth last valued at $22.3 million, and National Law Enforcement House, a three-story West Perth office block 78 per cent owned by Becton entities, which last sold for $21.5 million in 2001.

The most prestigious site, 111 St Georges Terrace, which is also managed by Becton, has been on the market for some time.

A syndicate of buyers reportedly including Primewest and EG Funds Management are understood to have come close to a deal above $100 million.

That is understood to have fallen through just last month.

It remains on the market and there is continued interest, according to Knight Frank agent John Corbett.

In an update to the stock exchange late last week, Becton said it had received a number of proposals regarding its efforts to recapitalise the business.

However, underlying the uncertainty of its position, it said that those proposals were incomplete and conditional.

Becton said it has cut debt and other obligations in calendar 2008 by $275 million to $562 million and this process of debt reduction remains the company's focus.

In 2008 it sold a string of properties, including several in Perth.

"We are in very uncertain economic times which are having a significant impact upon the company's ability to execute its business strategies," Mr Pollock said in a statement released to the ASX.

"Property and financial service companies have to date been impacted most severely and Becton is feeling the full brunt of the negative sentiment.

"In my 40 years in business and property I have never experienced such turmoil."

Offering a glimmer of hope to investors in a presentation to the annual meeting, which was provided to the ASX, newly appointed Becton CEO Matthew Chun said the office market in Perth remained strong, as did Melbourne