Sponsorship deal to clear the air

WESFARMERS Energy has recently signed a major two-year sponsorship agreement with the Asthma Foundation of WA. 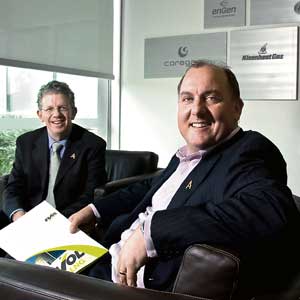 WESFARMERS Energy has recently signed a major two-year sponsorship agreement with the Asthma Foundation of WA.

The plant and associated infrastructure was commissioned in 2008 and is capable of producing 175 tonnes of LNG per day, or the equivalent of 240,000 litres of diesel per day, supplying the diesel fuel alternative for the domestic heavy duty vehicle and remote power generation markets.

"We need partnerships with organisations for revenue, of course, but there needs to be an alignment of objectives; we need to align with the company's objectives and they need to align with ours, and LNG is a step in the right direction in improving air quality, so we both have that same goal."

Mr Gummer said the new partnership would assist with funding the ongoing provision of asthma services and medical research throughout the state.

These services include training and educating the community to manage their asthma and understand what triggers an attack, and to improve their living environments.

"Both the Asthma Foundation and Evol LNG are focused on improving air quality for Western Australians and Evol LNG is committed to supporting communities in which it operates," Mr Lowson said.

"The Asthma Foundation of WA is all about promoting a clean and healthy air environment; this is a goal that Evol LNG is assisting in by encouraging the use of LNG as an alternative fuel in heavy vehicles."

Mr Lowson said the prevalence of asthma in Australia was another reason why the company had chosen to support the foundation.

Looking for growth opportunities in gas and power, Wesfarmers began investigating LNG for the heavy-duty vehicle and industrial markets in 1998, commissioning a pilot plant at Kwinana in 2001 following a successful LNG study tour of overseas markets.

At the time, market conditions were favourable for an alternative fuel and, given existing organisational capabilities in gas production, transport logistics and gas distribution infrastructure, Wesfarmers saw an opportunity to develop an LNG business in Australia.

The first customer refueller was installed at Sands Fridge Lines by the end of 2002, servicing its line haul requirements.

In September 2006, Wesfarmers Energy announced a $137 million investment in the domestic LNG project at Kwinana, adjacent to the existing Wesfarmers LPG facility.