Spending shift not set in stone

Spending patterns in WA have changed since the early days of the COVID-19 pandemic, with the state unexpectedly entering a housing boom after years of slowdown. Household confidence in WA is back on track. Photo: Gabriel Oliveira

As markets in Europe locked down in March 2020, Australia braced for a recession which, thankfully, never materialised.

But the wheels were already in motion and the pandemic inevitably modified our consumption patterns, firstly due to uncertainty and panic buying, but also because of longer-term travel restrictions.

At the beginning of the pandemic, households’ response to the economic uncertainty was to cut consumption in favour of savings.

In Western Australia there was an overall decline in final consumption of 11 per cent in the quarter to June, the worst decline on record so far.

However, all retail trade was not affected equally. In the early days of the pandemic, spending on hotels and cafes fell by 41 per cent as a result of the health measures put in place. Clothing retail also declined substantially, by 18 per cent, for the same reasons. 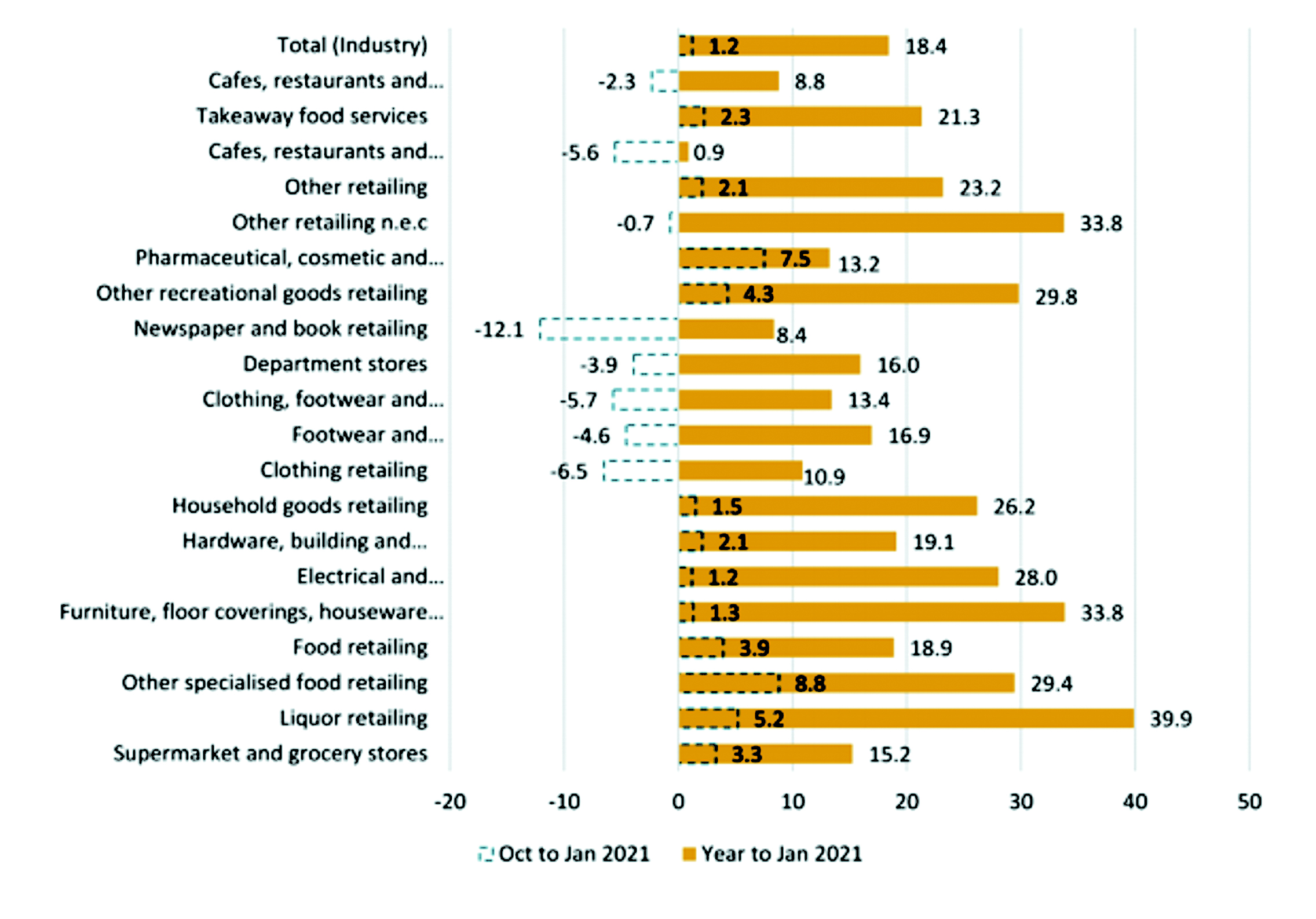 The shift to working from home created deserted roads and a decline in transportation services (-83 per cent) and the operation of vehicles (-22 per cent).

At the same time, spending on furniture and household equipment increased as people started buying desks, computer screens and chairs, converting their home into a work environment.

Gardening and home projects were activated, generating a 20 per cent increase in hardware, building and garden supply retail trade.

However, since this time, spending patterns have changed. WA’s handling of the crisis, along with the federal and state stimulus packages, prevented a recession in this state, and quite unexpectedly generated a housing boom after years of slowdown.

As a consequence, WA has recovered almost all employment losses since the pandemic and the budget has returned a surplus, helped along by historically high iron ore prices.

By the last quarter of 2020, household confidence was back on track, as was purchasing power. But with the borders closed and international travel out of reach, household consumption shifted elsewhere.

Money usually allocated to international travel was redistributed towards the purchase of new cars, with sales up 45 per cent in December 2020 relative to the same quarter of the previous year. This demand for vehicles lifted prices by 5 per cent.

Spending in cafes and restaurants has also bounced back, increasing by 55 per cent since June 2020. Spending on recreational goods and culture has also improved as venues reopened and Western Australians looked closer to home for leisure.

WA’s love for fashion intensified during the pandemic, with retail trade in clothing and footwear surging by 14 per cent in the 12 months to January 2021. These are some of the highest growth rates seen in the past decade.

However, all the money saved in childcare, electricity, and rent did not only go into healthy pursuits such as gardening. Our unhealthy habits also dominated this period, with consumption of alcohol rising by 13 per cent in the immediate quarter following the onset of the pandemic. This pattern has remained constant over the past year, despite a 3.5 per cent increase in alcohol prices.

While many of these changes in consumption patterns may not be permanent, some will last longer. Shifts in remote working, virtual learning and online meetings will likely become mainstream and revolutionise our demand for transport, travel and electronic goods.

Just how many of these behaviours stay with us remains to be seen.