The state’s net debt will peak at a level $2 billion lower than previously forecast, at $40.9 billion, with Treasurer Ben Wyatt forecasting an operating surplus in the 2021 financial year. 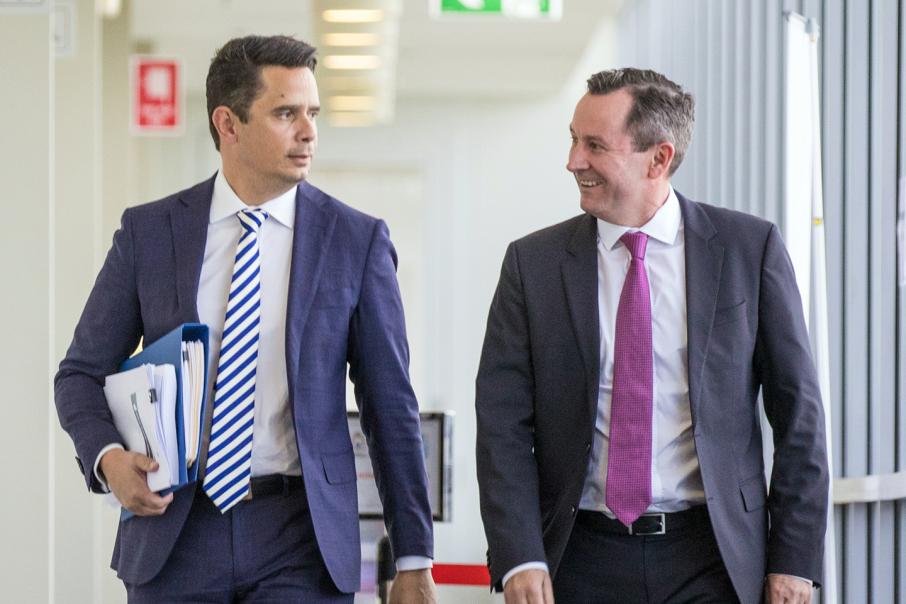 Treasurer Ben Wyatt and Premier Mark McGowan have been in government since March last year.

The state’s net debt will peak at a level $2 billion lower than previously forecast, at $40.9 billion, with state Treasurer Ben Wyatt's second budget predicting an operating surplus in the 2021 financial year.

It ends a run of 11 consecutive budgets where projections for the summit of net debt continued to grow.

Briefing journalists before releasing the budget today, Mr Wyatt cited low spending growth and projections that around 50,000 new jobs will be created in the coming four years as the key drivers of improvement.

Growth in recurrent spending (that is, excluding capital investments) would be the lowest level in 20 years in the 2019 financial year, he said, coming in at a rate of 0.9 per cent annually.

Across the forward estimates, it would average 1.2 per cent per annum.

“(That) means if there is an uptick in revenue, you can actually take advantage of it,” Mr Wyatt said.

“(The previous government) had revenue asunder but their spending outstripped it.

“Keeping expenditure growth low as we have done, when there is a return to stronger revenue growth … you're in a position to take advantage of it.

A deeper reading of the numbers show one big win for the state government in limiting spending growth was from its Commonwealth counterpart, which agreed to take over the management of the National Disability Insurance Scheme in WA directly.

Previously, the NDIS was to be funded as a grant, which the state government would then allocate onwards to disability services.

The change means spending and revenue were both reduced about $2.1 billion across the four-year forward estimates period, and the budget documents noted that without the impact of the NDIS move, spending growth would have actually been 2 per cent per annum.

Mr Wyatt touted his tough wages policy as another factor helping keep a lid on spending growth, with general government salaries to rise 1.6 per cent in underlying terms annually on average over the next four years.

About 2,050 of the 3,000 planned voluntary public sector redundancies would be achieved by the end of the financial year, Mr Wyatt said.

There were also some revenue wins for the government.

New jobs growth and improving wages will help boost payroll tax receipts, which are expected to grow at 6.1 per cent annually on average for the next four years.

That follows three consecutive annual falls, including in the current financial year.

Revenue changes since the government’s last mid-year review included $1.5 billion more in grants from the Commonwealth government, largely for infrastructure such as Metronet.

All up, revenue will grow at 3.2 per cent annually.

For the coming financial year, the operating deficit will be $1.2 billion, with a surplus of 935 million in the year to June 2021.

Economy
The delay in completion of major LNG investment projects means that state final demand, which measures the economy's performance excluding exports and imports, will fall 0.25 per cent in real terms in the year to June 2019.

Last year's budget had predicted a 1 per cent rise.

Private business investment, which includes LNG projects and other capital investment initiatives, is expected to return to growth in the 2020 financial year, after about half a decade of contractions.

That significant fall, driven by the end of the mining boom, had been the main factor in WA’s recent economic slowdown.

Exports and consumption will be positive contributors to GSP growth across the next four years.

Chamber of Commerce and Industry of WA chief executive Chris Rodwell said the budget would boost confidence in the state’s economy.

“CCI welcomes the government’s strong focus on reining in spending which will reduce the size of the government from the unsustainable peak this year of 12.6 per cent of the economy to 11.7 per cent in 2021-22,” he said.

“This reduction in government spending is taking the budget toward pre-boom size, which is strongly welcomed by CCI.

“The WA government is still the highest spending state government in the country on a per-person basis, however good progress is being made to close the gap.

“CCI has consistently advised the government it has a spending problem, not a revenue problem, and this advice has clearly been heard.

“It will take continued discipline from the government to ensure it can meet its ambitious expenses growth reduction forecasts.”

The budget assumes wage price index growth of 1.5 per cent, below the federal government's national projection of 2.25 per cent.