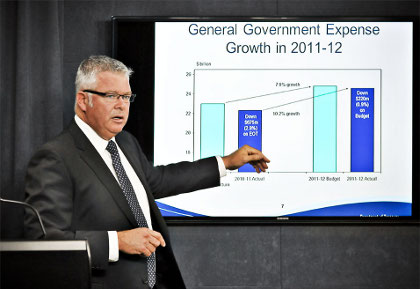 The state government has announced $328 million in spending cuts and foreshadowed further savings later this year to try and protect its budget surplus from the impact of falling mining royalties.

Announcing the changes today, Treasurer Troy Buswell hedged on whether the government would be able to maintain its promised budget surplus.

“I think we are going to have to look at further measures,” he told journalists when asked if the savings announced today would be enough to maintain a surplus.

“Possibly not,” was his response when asked again if these measures would be sufficient to keep the budget in surplus.

“It is a very volatile environment, but I’ll tell you what, without these (measures), there is no way we would be in surplus.”

The challenging times ahead contrast with the better than expected budget outcome for the 2011-12 financial year.

The operating surplus for last financial year was $649 million, well above the initial estimate of $442 million and the mid-year estimate of $209 million.

The financial results were boosted by earlier than expected Commonwealth payments and stronger payroll tax collections.

State final demand grew by 14.7 per cent last financial year, double the expected level, primarily due to the strength of business investment.

Mr Buswell commented that both general government revenue and expenses had grown by less than forecast at the time the budget was released.

“Although net debt has increased relative to the previous year, it is sustainable and affordable and key financial ratios are well within those needed to maintain the State’s triple‑A credit rating,” the Treasurer said in a statement.

“Notwithstanding these good results, recent volatility in the iron ore price and the persistently high Australian dollar are placing significant strains on the State’s finances this year.”

Every US$1 fall in the iron ore price cuts $33 million off royalty income, while every US1 cent rise in the dollar cuts revenue by $60 million.

Mr Buswell added that the expected fall in WA’s share of GST grants, and the changed timing of specific purpose payments, which Canberra had been brought forward to last financial year, would also put pressure on this year’s budget.

“These circumstances have required the Government to implement a further round of budget savings measures,” Mr Buswell said.

The government will save about $150 million by immediately lowering of the ceiling on the number of full-time equivalent employees in the general government sector, to 111.273 positions.

The new ceiling will reflect current employment levels in government agencies, some of which are already below the ceiling.

“There will be no cutting of existing positions,” Mr Buswell said. “The measure simply means that agencies will need to continue operating (until further notice) at their current staffing levels.”

A further $80 million will be saved by a 1.5 per cent reduction in agencies’ 2012‑13 budgets for purchasing goods and services, including consumables, such as stationery, communication, administration and consultants.

The balance will be saved by limiting the growth in public sector leave liabilities, by capping these at June 30, 2012 levels.

The Treasurer said the savings would be achieved through changes within government that would not affect services to the public.