Speculators may soon urge miners to ‘bring out your debt’

Bell Group has been in the news recently, which is an apt reminder of the downside of debt, considering the state of play in the resources sector. 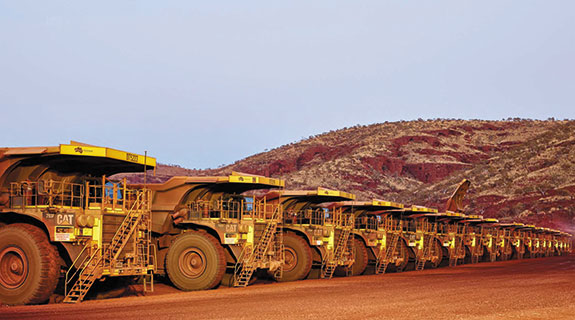 SAVING: FMG has started buying back its own debt to cut interest owed. Photo: FMG

Bell Group has been in the news recently, which is an apt reminder of the downside of debt, considering the state of play in the resources sector.

Having suffered from the collapse in commodity and share prices, Western Australia’s resources sector faces a looming second crisis that can best be described in two words – debt bomb.

The problem is a re-run of the same issues that lie behind the state’s longest-running legal saga – the fight over proceeds from the 1988 collapse of Bell Group.

Common threads connecting events of 27 years ago and today include companies weighed down by more debt than they can service, and savvy speculators who can see opportunities to make a fortune from buying the debt of distressed borrowers.

The man who moved fastest in the Bell situation was Louis Reijtenbagh, a Dutch investor who soaked up a large parcel of Bell Group debt at a few cents in the dollar and then waited for the reward to follow from the distribution of cash in Bell, plus other legal settlements.

At one stage, Mr Reijtenbagh stood to harvest hundreds of millions of dollars from the $1.7 billion Bell litigation, though how much he will now get after the state government intervened to ensure the maximum return for the Insurance Commission of Western Australia remains to be seen.

Mr Reijtenbagh’s game of buying the debt of distressed companies can yield both short and long-term rewards. In the short term, the yield on the investment can be high because the low purchase price has a dramatic effect on the yield. In the long term, if the company fails the owner of the debt can emerge as the owner of the business – though generally only after a long and complicated process.

The first hint that a fresh round of the ‘debt game’ is being played in the aftermath of the commodity-price collapse came when Fortescue Metals Group started buying back its own debt at levels pitched as low as 75 per cent of the price at which the debt was originally issued (75 cents in the dollar).

In Fortescue’s case, the aim is to cut annual interest payments by reducing the overall debt level; a smart move given the likelihood of a continued decline in the iron ore price, rising US interest rates, and the comfort of knowing that there’s no aggressive investor in the market seeking to acquire loose debt.

That final point is not one yet widely discussed in Australia, but it is one being debated in the world’s financial centres, where the acquisition of distressed debt is seen as a way of acquiring quality assets stuck inside a failing corporate structure.

A classic example of what’s happening is the Irish-based titanium minerals miner Kenmare Resources, which has attracted a tentative takeover proposal from Perth-based Iluka Resources.

On the London Stock Exchange, Kenmare’s shares have dropped to 0.65 pence, valuing the equity in the company at $US27 million, a fraction of its $US317 million in outstanding debt.

Whoever buys or merges with Kenmare stands to inherit that debt. And that leads to a second possibility, which would be to buy the highest-ranking debt and then wait to see whether Kenmare slips into insolvency (with the debt owners likely to have first rights over the company’s assets).

Specialists such as Mr Reijtenbagh are undoubtedly active in the market for the debt of companies facing cash-flow problems, just as they were when Bell Group was failing.

But this time around there is another group of active buyers of debt – the private equity funds, which have been ominously quiet on the equity side of financial markets.

Funds such as the $US5 billion marshalled by former Xstrata boss Mick Davis had been expected to make a move on mining company targets as their share prices crashed in the wake of commodity-price falls.

So far there has been no public sighting of the Davis-led X2 fund. That could be because Mr Davis has been busy soaking up the discounted debt of companies he has targeted in the belief that cheap debt investments will deliver an initial high yield, and ensure him a place at the table should the target get into deeper trouble.

ANY doubts about iron ore being yesterday’s commodity (and the rise of copper and bauxite as two of tomorrow’s commodities) were dispelled last week when Australia’s big two of mining, BHP Billiton and Rio Tinto, started marketing their copper and bauxite credentials to investors.

Rio Tinto was first cab off the self-promotion rank by approving the development of the $US1.9 billion Amrun bauxite project (formerly known as South of Embley) in Far North Queensland.

The project will deliver an initial 22.8 million tonnes a year of bauxite (used to make alumina and then aluminium) to China and other Asian customers.

Not stated, but implied, in the go-ahead for Amrun is that a new bauxite mine in Queensland offers a better potential investment return than an expanded iron ore mine in WA.

BHP Billiton delivered the same message when it carted a planeload of investment bankers to its copper projects in South America. That jaunt that will achieve a number of objectives, including providing a pleasant diversion from the disaster at the Samarco iron ore mine, and a chance to show that copper is a major growth area for the company.

Top of the inspection list for the bankers are the giant Escondida and Spence copper mines in Chile, plus the prospect of a fresh update on the mothballed expansion of the Olympic Dam copper and uranium mine in South Australia.

SIGNS that the solar energy industry is coming of age and might soon be able to compete with fossil fuels without the need for taxpayer subsidies continue to emerge, even though the latest clue is somewhat perverse.

Not all US solar power companies agree with Sunnova, but the call for a change to the rules indicates growing confidence at the top of the industry that the solar era really has arrived.