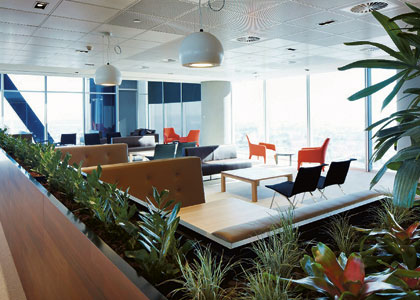 MIXED UP: BHP Billiton’s new offices in Brookfield Place will feature an open-plan floor space with no offices and a variety of different work areas.

BHP and other companies in Perth have taken the lead from Europe, America and the east coast by adopting workspaces that feature a variety of collaborative, informal and individual work environments.

To some this may sound like a description of the well-established ‘open-plan’ office design, but according to commercial interior designers this term is now antiquated.

“This is where you actually look at the way people work and design offices around those needs.”

Mr Roberts said there was also a trend towards people not having their ‘own’ desk.

It reflects the  philosophy at the heart of design professional Erik Veldhoen’s 1994 novel The Demise of the Office.

Bankwest, for instance, is adopting the practice of ‘hot desking’ at its new offices at Raine Square, where activity-based design has also been employed.

However, hot desking and activity-based design do not always go together.

“Mining and resources companies are taking up this office design because they haven’t got enough space in Perth; flexible work spaces offer a solution to this,” IA Group managing principal Nick O’Hara said.

This month, more than 3,000 BHP employees will move into the new headquarters at Brookfield Place, making it home to the largest group of BHP Billiton employees in a single office building in the world, according to the company’s vice-president of external affairs WA, Julius Matthys.

Having taken 34 of the new building’s 45 floors, BHP will only retain six of its other 21 Perth offices, mostly for project staff.

Brookfield Place has a completely open-plan floor space with no individual offices, and consists of a variety of different work areas.

The top floor, defined as a ‘mixed-use’ zone, somewhat resembles a hotel with open-plan lounges, a business centre and a lunch and quiet area.

This area was specifically designed to satisfy the diversity in BHPs travelling workforce.

Another feature, on the fourth level, is a large outdoor terrace with barbecues.

Floors one to four will comprise a variety of meeting rooms, for visitors to the building.

That means BHP staff can go about their business on every other floor, knowing there are no external visitors.

Bankwest has adopted a similar activity-based structure at its soon-to-be-completed offices at Raine Square, which will be unveiled within the next two weeks.

Hassell was responsible for the interior design of the new BHP offices and its principal and international head of interiors, Scott Walker said, open-plan work environments were an established norm for most organisations.

Mr Walker described this new structure as being similar to a library.

“When you go to a library you take your work materials with you and sit in the area which best suits what you want to do,” he said.

Employees in an activity-based office choose the area that best suits the activities they need to perform on a given day.

“It is a theme that is developing in workplaces nowadays but it isn’t a one solution fits all,” Mr Walker said.

“For a lot of companies it’s not an appropriate office management system.

“Offices are still a dominant feature in the legal industry, with a ratio of 30-50 per cent dedicated to office space, while other industries might have a sprinkling of offices or none at all.”

HBO+EMTB associate director Alan Pettigrew attributed the traditional approach adopted by the legal industry to the nature of its work.

“The work legal firms do requires a certain degree of privacy, due to their confidentiality agreements,” Mr Pettigrew said. “From the perspective of a law firm’s clientele, they want to witness the firms operations to a certain degree but they also want to feel security and privacy when consulting with their lawyers.

“Open plan, multi-function offices would create a sense of nervousness in this context.”

While open-plan may not be suited to law firms, it does suit many others, which are able to accommodate more staff in a given space.

“The amount of floor space needed can be significantly reduced as multiple people can use the same desk,” Woodhead Perth principal Jacqui Preshaw said.

“Activity-based working is about removing the structure and hierarchy of a traditional office where someone sits in one spot all day, every day and instead having them sit in areas most suited to specific tasks.

“For a project team the environment most conducive to informal brainstorming may be an interactive area with soft seating and AV technology.”

Ms Preshaw said activity-based offices provided a new approach to how employees work in their offices.

“For it to be successful employees must go to work knowing what they’re doing that day and using the area that is best suited to that task,” she said. “You can’t just stick employees in the space and expect them to work in their traditional manner.”