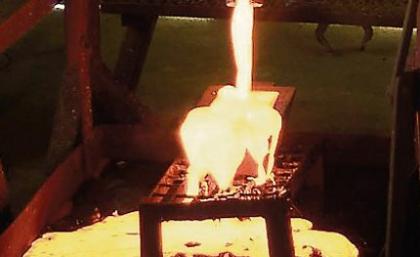 Southern Cross Goldfields will merge with Polymetals Mining, creating a gold miner with a market capitalisation of around $30 million.

Southern Cross announced today it would offer 11 of its shares for each Polymetals share by way of scheme of arrangement, valuing Polymetals at more than $10.9 million, based on Southern Cross’ last closing share price of 2.6 cents.

The “merger of equals” has been unanimously approved by the Polymetals board of directors.

Southern Cross shareholder approval is not required for the merger to proceed.

The new entity will hold a portfolio of gold and base metals projects in Western Australia, South Australia and New South Wales, with a combined JORC-compliant mineral resources of 1.69 million ounces of gold, and ore reserves totalling 254,000oz gold.

It will have just over 867 million shares on issue, with cash reserves as of March 31 of $13 million, with debts of $7 million.

“This represents tremendous opportunity for two emerging gold companies to be proactive in the current environment and therefore to remain in control of their own destiny,” Polymetals chairman David Sproule said in a statement.

“This merger provides a truly complementary blend of assets, cash and skillsets that will create a new Australian gold company with genuine investor relevance.”

Southern Cross chairman Samantha Tough, who will be chair of the new entity, described the transaction as compelling for both companies.

“Southern Cross shareholders will benefit from exposure to Polymetals’ near-production assets on the east coast of Australia, as well as the skills and expertise of their management team in developing efficient gold operations," Ms Tough said.

“The combined group will have a strong balance sheet and the ability to fast-track development of its key assets, while also funding aggressive exploration programs.”

Mr Sproule and Polymetals directos Jon Parker and Frank Terranova will join the board of the new gold miner, as will Southern Cross directors John Row and Graham Brock.