Cranes are to become a feature of the South Perth skyline as a wave of new apartment proposals move towards construction. 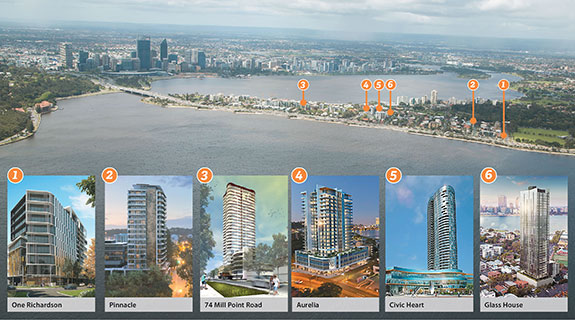 Cranes are to become a feature of the South Perth skyline as a wave of new apartment proposals move towards construction.

Plans for the City of South Perth to become a high-rise residential enclave are gathering significant momentum, with more than $1.5 billion in projects already approved and developers tipping that number to grow to $2 billion in short order.

The vision has taken more than eight years to bear fruit, with the idea of a South Perth Station Precinct, with no restriction on height limits, first floated in late 2006.

Following years of consultation and planning, the precinct vision was adopted by the council and endorsed by the Western Australian Planning Commission in January 2011.

While there has not yet been confirmation a train station will actually be built in South Perth, Probuild has begun construction on the first project to be approved under the new guidelines – an $85 million, 75-apartments-plus 5,000 square metre office project called One Richardson, by developer Devwest Group.

Director Damon Ferguson said Devwest was pleased to be the first to break ground in a precinct tipped to become increasingly popular among major developers.

“There has been no substantial residential development in South Perth for a long time, probably the past five years, which catered to a price point in that $750,000 to below bracket.

“The momentum is starting to gather and at some point there will be a really strong case to lobby the government for that train station.”

Mr Ferguson said the City of South Perth had been extremely supportive to the private sector in terms of delivering the vision.

“They’ve gone ahead and done the rezoning and have been very keen to try and get the area up and running as quickly as possible,” he said.

“It’s probably the fastest I’ve seen in terms of the amount of approvals they’ve pushed out, outside of an MRA-type scenario.”

The second project under construction in South Perth is Zone Q Investment’s Pinnacle, a $100 million project that also combines commercial and apartments.

Jaxon began work in February on the Pinnacle development, which will comprise a 20-storey luxury apartment tower and a seven-level commercial building on the corner of Charles Street and Labouchere Road.

However, early last month, Business News reported that a proposal from developer Westbridge Property Group was about to change the game.

Westbridge’s $160 million, 148-apartment The Glasshouse, located at the corner of Labouchere Road and Lyall Street, will set new height records for a building outside of the CBD at 39 storeys.

The Glasshouse also includes a 70-room hotel and two ground floor commercial tenancies, to satisfy the commercial requirements of the planning guidelines.

Westbridge director Matthew McNeilly said a hotel was a solid point of difference in a market about to be flooded by new developments.

“Others have looked at retail and there’s some office space coming up in some of the developments; we just thought that a hotel was a neat use given its proximity to Perth Zoo and proximity to the CBD as well,” Mr McNeilly told Business News.

“It’s still a small hotel, only 70 keys, it’s not too big for the marketplace and I suspect it will go particularly well.”

Mr McNeilly said he envisaged South Perth being developed along the lines of North Sydney – a significant residential enclave close to the action of the CBD, but with its own identity.

“The amenity will build, South Perth already has a nice cafe and restaurant strip but I suspect that will expand out and permeate along Mill Point Road and up Labouchere Road,” he said.

“That’s the lesson we’ve learned so far from the apartment market, you have got to locate your projects in places where there is already good amenity.

“It doesn’t go the other way around, i.e. you build the apartments and the amenity flows.”

Perth’s largest apartment developer, Finbar Group, recently proved the significant level of buyer appetite in South Perth with the sale of 73 apartments at its Aurelia project in the first weekend of marketing.

Aurelia will be 21 storeys and 118 apartments on the corner of Harper Terrace and Mill Point Road, directly across from another project Finbar is planning – the $300 million Civic Heart development.

Finbar declined to comment on Civic Heart as it is yet to win planning approval, however the proposal includes 295 apartments and a significant retail precinct, including a new large-scale supermarket.