Buyers at Finbar Group’s $400 million Civic Heart project are being refunded their deposits, after the state’s largest apartment developer announced it would scale back the size of the tower because of uncertainty regarding planning rules in South Perth. 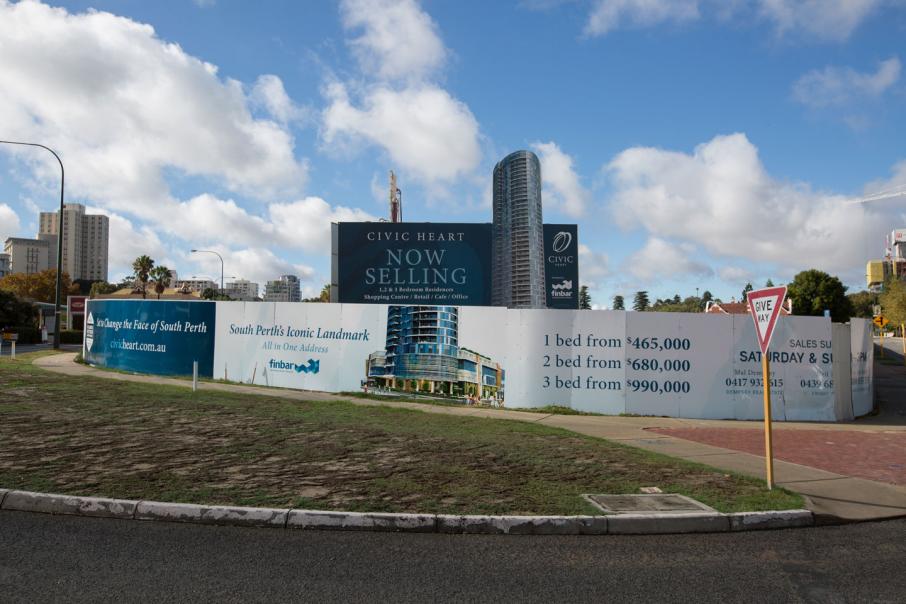 Buyers at Finbar Group’s $400 million Civic Heart project are being refunded their deposits, after the state’s largest apartment developer announced it would scale back the size of the tower because of uncertainty regarding planning rules in South Perth.

Planning guidelines became a battleground after the City of South Perth relaxed height limits in 2013, with a vision of higher density living and more employment opportunities through new commercial and retail space.

With no height limits in place, developers moved on a range of skyscraper proposals, the most controversial being Edge Visionary Living’s Lumiere at 74 Mill Point Road.

The Lumiere saga dragged on for 18 months, with the developer’s original plan, for a 29-level tower, approved by planning authorities in May 2015.

That approval was set aside by the Supreme Court of Western Australia, with an appeal funded by local activist groups.

A second iteration of the tower – at 44-storeys – was rejected, but a third, 34-level, rendition of the proposal was approved by the metropolitan central development assessment panel in October last year.

At the same time the Supreme Court battle was going on, the City of South Perth attempted to reinstall a 26-level height limit on a large parcel of the suburb, with Mayor Sue Doherty saying that the council had been surprised by the sheer scale of proposals received.

Ms Doherty told Business News in July last year that Civic Heart was intended to be the flagship project under its original plan for the suburb, with the changes necessary because a raft of projects exceeding 39 storeys had been proposed.

Late last year, Planning Minister Donna Faragher rejected the move to reinstate height limits through a town planning scheme amendment, instead putting in place a stringent set of performance-based design principles that developers would have to meet to be allowed additional height.

The City of South Perth reluctantly accepted Ms Faragher’s changes to its proposed amendment late last month, while at the same time saying they were not in the long-term interests of the local community and a new review of its vision for the precinct would be undertaken.

Finbar said late yesterday the uncertainty and the soon-to-be-gazetted scheme amendment changes had made it difficult to sell apartments at Civic Heart, affecting its ability to deliver such a large project within normal development timeframes.

At the time, Finbar said requesting an extension of the DA was simply a matter of good business process, and that early works on the project would begin in January.

Yesterday, Finbar said it would announce details of the revised project in coming months, while flagging that it would likely be a smaller development than the original 38-storey tower.

“It is anticipated the project will be approved, launched and completed prior to the date in which Civic Heart would have been completed in its original form,” Finbar managing director Darren Patemen said in a statement to the ASX.

“Ultimately our redesign will result in a project that meets the newly revised planning aspirations of the city and community, mitigates development risk and still gives an attractive outcome for our company shareholders.”

Finbar’s original plan for Civic Heart comprised 294 apartments and a two-level shopping centre, which was scheduled to be completed in the 2019 financial year.

At the company’s AGM in October, investors were told that 137 apartments were under contract at Civic Heart, with a collective value of $128.2 million.

Finbar also launched an advertising campaign to sell the shopping centre component of the development, which will be anchored by Woolworths, in November last year.