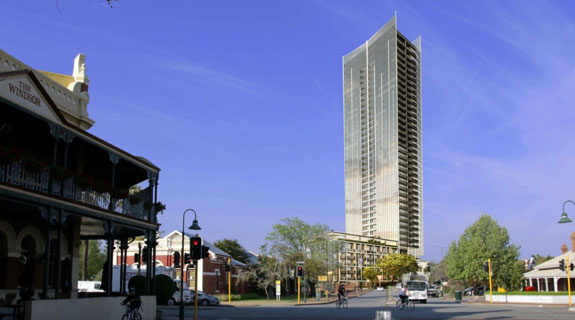 LANDMARK: An artist’s impression of Westbridge’s Glass House, submitted with its development application.

Developers are building a strong case for the state government to go ahead with construction of a train station at South Perth, with a fresh wave of large-scale apartment proposals to take the suburb to new heights.

Planning approval is expected by the middle of next week for a 39-level apartment and hotel project near Perth Zoo in South Perth, while another 29-level apartment building is also expected to get the tick, adding to a rapidly growing list of major developments for the near-city suburb.

The 39-storey project, to be located at the corner of Labouchere Road and Lyall Street, is the biggest to be launched by Luke Saraceni’s Westbridge Property Group, a joint venture with developer and funds manager Sirona Capital.

It has been recommended for approval by the City of South Perth and will be assessed by the metropolitan central development assessment panel on Wednesday.

Along with 148 apartments in a striking 38-storey tower designed by Woods Bagot, the Glass House project will include a 70-room hotel and two ground floor commercial tenancies.

DAP documents indicate the project will have a base construction cost of $80 million.

Westbridge Property Group declined to comment on the proposal ahead of the DAP meeting on Wednesday.

The project, which will be officially assessed on Wednesday, also includes 18 commercial and office tenancies on the ground floor.

DAP documents show it has a base construction cost of $60 million.

Edge Visionary Living also declined to comment on its proposal ahead of a DAP decision. Nearby, Finbar Group is progressing plans through the approvals process for a $300 million, 30-storey apartment project at the Civic Triangle site, which was expected to be the tallest building outside of the CBD until Westbridge’s proposal was unveiled.

The Civic Heart project at 1 Mends Street will comprise 295 apartments and a shopping centre, including a 2,500 square metre supermarket.

That building has a 2017 financial year completion window. Construction has also commenced on a $100 million, residential and commercial project by Chinese developer Zone Q Investments, on the corner of Charles Street and Labouchere Road.

The Pinnacle project will be a 20-storey tower containing 102 apartments, and a seven-level commercial building, being built by local construction contractor Jaxon.

Like Finbar’s Civic Heart, Zone Q’s Pinnacle was expected to be the tallest residential tower outside of the CBD at time of approval, before being trumped by larger South Perth projects.

All of the projects are located within the South Perth Station Precinct, where the City of South Perth relaxed planning guidelines in early 2013 to encourage intensive high-rise developments.

However, a new train station is no certainty, with the state government previously holding the view that South Perth was already well served by high-frequency bus and ferry services.