Community acceptance of tall buildings has come a long way in Perth, but developers still face significant challenges in their efforts to add density to near-city suburbs. 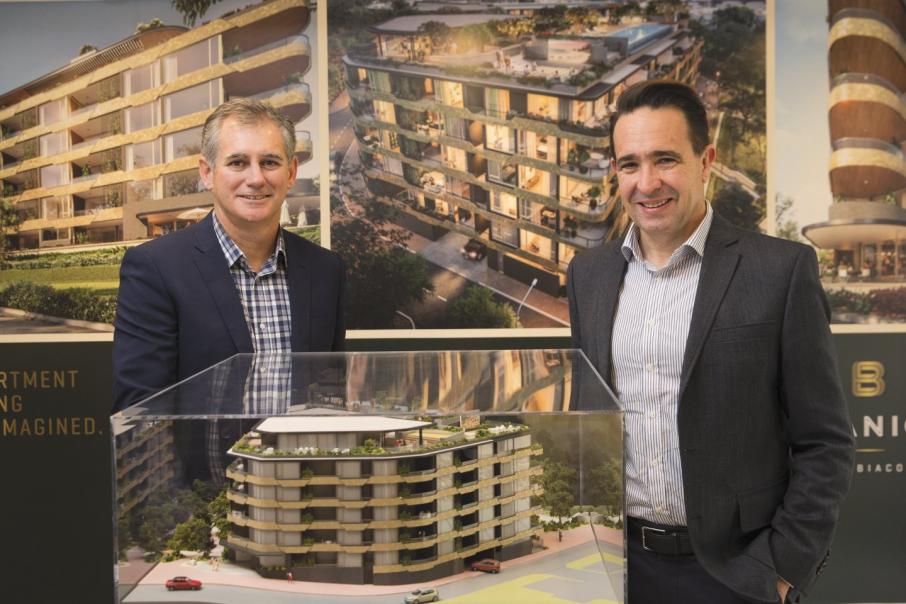 Despite more than two years of uncertainty, a pair of Supreme Court challenges and two redesigns of his building, Gavin Hawkins remains committed to bringing one of the most contentious apartment projects in Perth development history to market.

And Mr Hawkins said he’d do it all again, even if he knew of those challenges when he first lodged a planning application to build the 29-level Lumiere development at 74 Mill Point Road in South Perth in early 2015.

“The reality is, it’s a great site and people want to live there, that’s borne out with the $80 million worth of sales that we had in the first three months when we launched way back in 2015,” Mr Hawkins told Business News.

The Lumiere saga is perhaps the most extreme example of the issues developers in Perth face in bringing large-scale products to market.

In 2013, the City of South Perth changed its planning rules to allow larger scale mixed-use development, a strategy designed to bolster the case for a train station to be built in the near-city suburb.

Developers came on board quickly, with six proposals lodged in early 2015 of more than 20 storeys.

However, that wave of development sparked a crescendo of community consternation, most of it squarely focused on Edge Visionary Living’s Lumiere.

Community action groups raised concerns over traffic congestion and the integration of tall buildings with the existing streetscape, resulting in Lumiere’s initial planning approval being set aside after a successful challenge in the Supreme Court of Western Australia.

In response, the South Perth council moved to once again change its planning scheme and limit the height of development in the area, a proposal that was ultimately quashed by then-planning minister Donna Faragher.

However, the continued uncertainty over planning rules resulted in just two of those six initial proposals going ahead, while planning authorities rejected several other projects.

Even a proposal designed to be South Perth’s flagship development, Finbar Group’s Civic Heart, was not immune to the issues, with the developer saying the uncertainty had derailed its sales process.

Finbar is now in the middle of redesigning the building, with the new proposal expected to be up to 25 per cent smaller than its original plan.

At Lumiere, Mr Hawkins said Edge Visionary Living would launch a new marketing campaign later this year, with the third rendition of the project having won approval in October last year.

That’s despite the spectre of a Supreme Court challenge hanging over that latest approval, this time for a 34-storey tower.

“Our legal advice is we are very comfortable in our position on it, so we’ll be bringing it back to market, but it’s a process we have to go through that is causing significant stress to our buyers, which is very unfortunate,” Mr Hawkins said.

“The market and demand for the product is very significant, even though we’re not even marketing it.

“We’ve got some senior buyers who have been patiently waiting for almost two years now and it’s incredibly distressing for them, because their retirement plans have been put on hold, there are people who are incredibly upset by this whole process.

“And for what? We designed it within the parameters of the planning scheme, we’re frustrated as a developer, but we are incredibly disappointed for our buyers, who are going to have to become even more patient.”

Urbis director of economics David Cresp said the focus in South Perth needed to be more on what a building could contribute to a community, rather than consternation over how tall it was.

“Everyone wants the cafes to thrive and they want the small local bars, but often in Perth there doesn’t seem to be a connection that what makes those places exciting and good to be at is an intensity of people,” Mr Cresp told Business News.

“For a supermarket to be viable, you need more than 10,000 people within a catchment area, so you don’t just get these things because you leave places as they are and as they have always been.

“When you deliver a critical mass of people, you get more vibrant and exciting places.

“That’s what the focus in Perth needs to be, not on whether a building is 10 storeys or 16 storeys or larger.

“It should be ‘what is the building doing, what’s it doing for the area and what’s happening on the ground floor area’?”

While the South Perth issues are frustrating for developers, they certainly aren’t unique in the Perth planning context.

Back in 2011, the Western Australian Planning Commission set a target for 47 per cent of all housing to be built within the existing boundaries of the metropolitan area, in an effort to curb urban sprawl.

But restrictive planning regimes across local councils and the potential for community unrest have meant achieving that target has not been simple for developers.

In Cottesloe, fears of community uproar have resulted in not a single planning application being lodged to build along Marine Terrace, since the state government allowed buildings of up to eight-levels along the foreshore in 2014.

Closer to the city in Subiaco, former planning minister John Day was forced to overrule the local council in 2014, to allow development of up to 16 levels at the Pavilion Markets site on Rokeby Road.

More recently, there has been community division in Sorrento, after a proposal for a six-level apartment project along West Coast Drive late last year.

Blackburne managing director Paul Blackburne, who had to deal with a groundswell of opposition to his company’s Aria development in Swanbourne, described height limits of six storeys around Claremont Oval as a major missed opportunity to deal with Perth’s ever-increasing urban sprawl.

“Claremont should be 20-storey buildings,” Mr Blackburne told Business News. “This should be like Parramatta, another city within the city.

“It would help the traffic problems, it’s on a train station but you can only do six storeys.

“It’s crazy; we’re going to look back in 10 years and planners are going to say ‘what a missed opportunity to put density in and around Claremont’.

“Look at Subiaco. Subiaco is struggling as a result of a lack of density. The height limit is three storeys around the train station and there are 200 apartments. 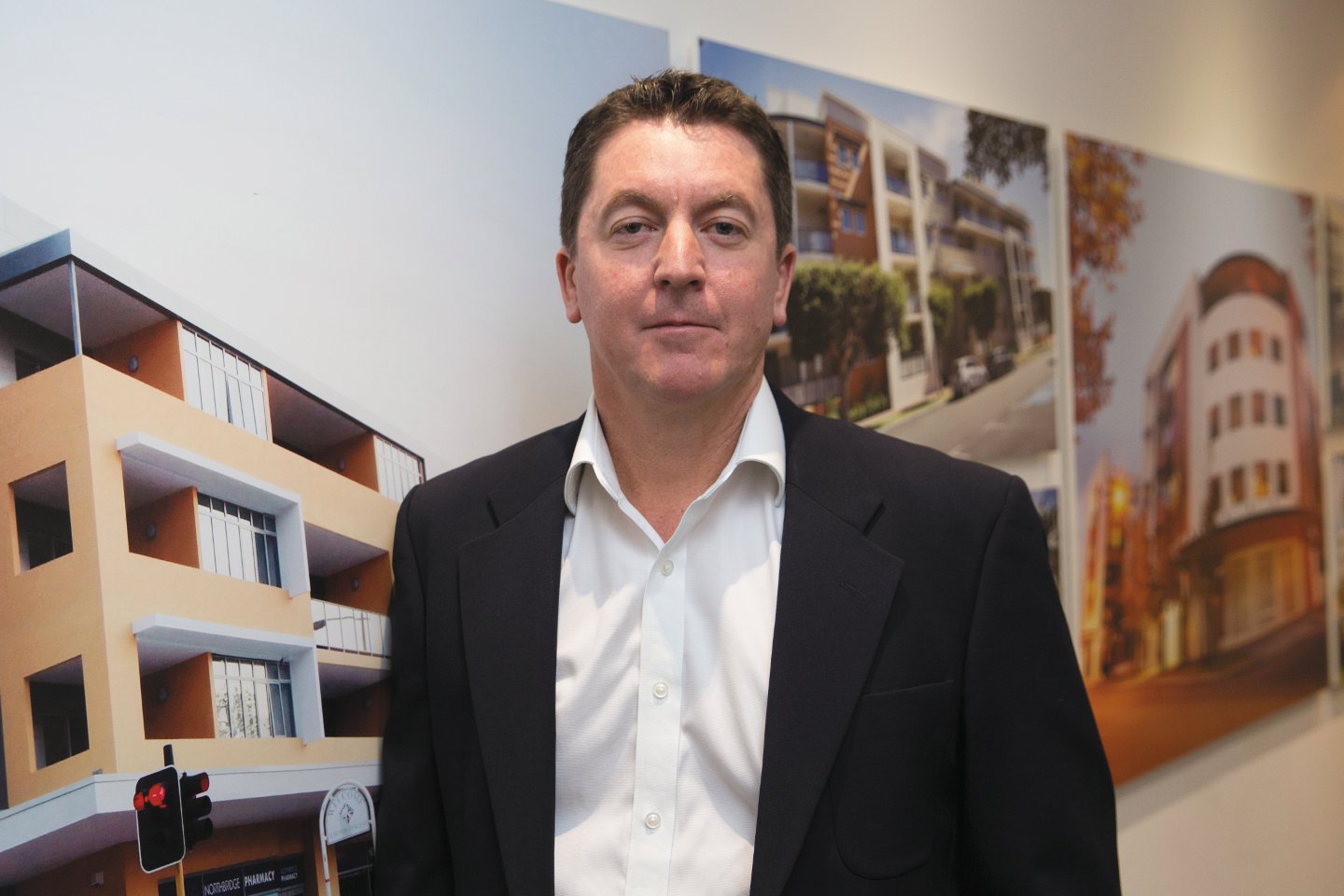 However, Psaros managing director Mike Enslin said he believed community attitudes towards higher-density development were beginning to change, pointing to the perceived acceptance of 3 Oceans Property’s 40-storey proposal in Scarborough.

At Scarborough, 3 Oceans has been on the front foot in getting the community onside, running a comprehensive consultation process to illustrate and define the proposal’s amenity, even before lodging a planning application.

“I haven’t got the impression that people are dismissing that as a pipe dream, instead they are saying ‘this could work’,” Mr Enslin said.

“I think the market is evolving; time will tell whether it’s ready yet, but it’s closer than it was a couple of years ago.

“People are now accepting of the trade-off that buildings have to get a bit bigger to get what they really want.”