South Hedland to get four-star hotel

South Hedland’s first four-star hotel is due to open by the end of this year, after a Melbourne based developer said it will build most of the hotel off site to save time. 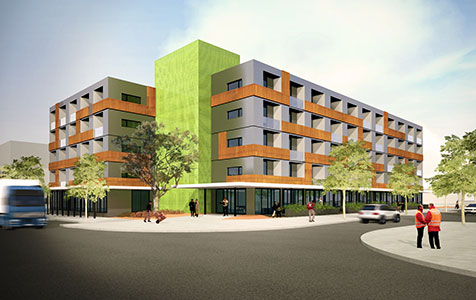 An artists impression of the new hotel in South Hedland.

South Hedland’s first four-star hotel is due to open by the end of this year after a Melbourne-based developer said it would build most of the hotel offsite to save time.

Hickory Group plans to build a 120-room, five-storey hotel using a modular construction method where 90 per cent of the hotel is fabricated offsite.

Regional Development and Lands Minister Terry Redman said Hickory had used modular construction to build several other Pilbara developments during the past year.

These include a Port Hedland apartment block that went up in four days and a six-storey residential building in South Hedland currently under construction.

“This will deliver the hotel up to 50 per cent faster than traditional building methods and at a lower cost, while minimising material and energy waste,” Mr Redman said.

The South Hedland hotel will overlook the town square and amphitheatre in the centre of town.

It will have a restaurant and conference facilities.

The hotel has been designed by architects Fender Katsalidis, which previously designed one of the world’s tallest residential buildings, the Eureka Tower in Melbourne.

The hotel development is part of the state government’s Pilbara Cities initiative, which helps fund the growth and development of communities within the Pilbara.