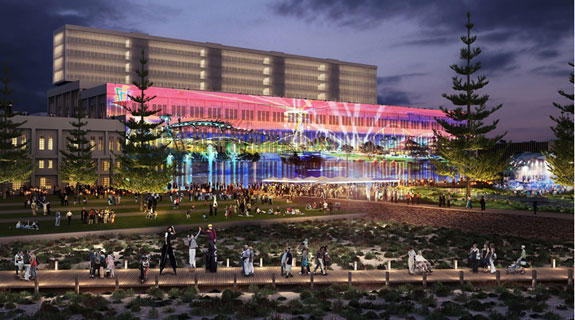 An artist's impression of the redeveloped power station, which has been on the State Heritage Register since 1997.

Developers will be able to get a slice of prime coastal land near the South Fremantle Power Station early next year, after the state government today approved the master plan for the redevelopment of the area.

Lands Minister Terry Redman said the project would be one of the metropolitan area’s largest urban renewal projects, with the area forecast to become home to 12,000 people over the next 15 to 20 years.

Mr Redman said the first development lots to be released would be in the Robb Jetty precinct, which covers 45 hectares and will ultimately incorporate up to 2,500 homes, a main street piazza, public open space and a new primary school.

Site works for the first stage of the Robb Jetty precinct are scheduled to begin early next year. The South Fremantle Power Station master plan, developed by architecture firm Hassell, was initially released for public comment in September and separates the land into three distinct precincts – Robb Jetty, The Power Station and The Hilltop.

The redevelopment area covers 333ha stretching from South Beach to Port Coogee, 98 of which will be redeveloped. The Power Station proposal comprises the development of a number of five-storey apartment buildings close to the decrepit power station, which has been closed since 1985.

Those buildings would be complemented by a series of three-storey walk up apartment buildings.

The power station itself will be retained and redeveloped, with residential development comprising around 150 dwellings set to go in the eastern portion of the building, while a commercial, retail, hospitality and tourism precinct has been proposed for the station’s turbine hall.

Approximately 5,500sqm of retail and office space will be distributed across the ground, first and second floors of the building, while there will also be around 2,000sqm of shops and hospitality tenancies around the main street of the precinct. An artist's impression of a public square near the redeveloped power station.

The Hilltop precinct is located on the eastern boundary of the redevelopment area and will be primarily residential development and public open space with sweeping ocean views.

“This visionary project will fill a gap in the market,” Mr Redman said.

“It will provide a range of housing options to create a unique new way of urban living on the coast south of Perth, while being sympathetic to the area’s industrial past.”

The state government expects the revitalisation of the area will create around 3,000 jobs in the construction phase, while the retail and commercial precincts will also result in significant employment opportunities.

Mr Redman said LandCorp had worked closely with the City of Cockburn, the City of Fremantle, the Heritage Council, the Department of Transport, Synergy and Western Power to develop the master plan.

Business News reported earlier this year that there was already significant residential development going on in the area, including projects by boutique apartment developer Match, TRG Properties, Stockland and Australand.

Match managing director Lloyd Clark said the approval of the master plan was welcome news for the area.

"We identified that North Coogee-Port Coogee corridor a number of years ago and we were pretty quick to seize on that opportunity," Mr Clark told Business News.

"Over the years we’ve acquired a number of sites from both LandCorp, Stockland and Australand, to take advantage of the urban renewal on the southern coast."