Rather than embracing the economic opportunity its mining sector offers, South Africa is struggling with bureaucratic and labour problems. 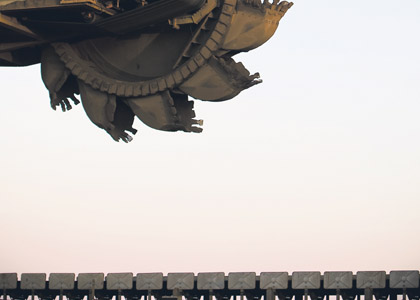 WRONG TRACK: Australia’s MRRT is raising next to no revenue for the government, yet some African countries are following our lead. Photo: Rio Tinto Iron Ore

Rather than embracing the economic opportunity its mining sector offers, South Africa is struggling with bureaucratic and labour problems.

Name Australia’s most valuable export; and before you reply iron ore, coal or liquefied natural gas, here’s a clue - it’s on paper, not in the hull of a ship.

The correct answer, which sounds odd today but will become clearer over the next six-to-12 months, is Australia’s hotly disputed Minerals Resource Rent Tax.

To understand how a piece of tax law could be turned into a valuable export item it is necessary to consider what’s happening in two places at virtually the same time.

In Australia, the MRRT has been designed, re-designed, and thoroughly twisted into a shape where it barely raises any revenue, and might never do so if there is a change of government on September 14.

Rather than question the design of Australia’s MRRT, a tax that raises no tax, or consider the changing nature of the debate in Australia and the near-certainty of the tax dying after the next election, African countries are falling over each other to whack their mining industries with higher taxes and the forced transfer of a bigger ownership share of mines to government.

It will take a while for this situation to work through but what appears to be happening is that Australian politicians, except those from the far left, are starting to realise that the resources boom has run its course and it is extremely hard to apply a super tax on an industry that is not earning super profits but is, in fact, closing more mines than it is opening.

Some African politicians might understand the changes under way in the commodities market, and the damaging effects of falling prices and rising costs, but if they do then they’re keeping awfully quiet about it, and seem to be charging full steam into a future of rising taxes.

There are two main reasons why African governments are locked into a future of higher taxes:

•    they promised their citizens more jobs and a brighter future thanks to the resources boom and the taxes that could be extracted from mining; and

•    Australia, the world’s leading mining country, is raising taxes, so they decided to follow the leader.

Perhaps it was a cunning plot hatched by the former prime minister, Kevin Rudd, and his faithful Treasury secretary Ken Henry to lull Australia’s mining rivals into a belief that it was okay to hit miners with a big new tax - causing the rivals to follow - and then drop the idea, leaving rivals with higher tax rates and a less competitive mining industry.

That suggestion, obviously, comes from the ‘pigs may fly’ chapter of conspiracy theories. A more likely explanation is that the Africans, many having already adopted Australian mining laws, thought it would be just as easy to adopt Australia’s tax laws.

What they don’t realise - and probably can’t correct because of widespread expectations of more jobs and better government services paid for by higher mining taxes - is that Australia is moving closer to ramming the tax genie back into its bottle.

The country where most damage is being done by attempting to mimic Australia’s mining industry and tax laws is South Africa, where huge expectations of higher wages, more jobs, and a greater share of mining profits have failed to materialise in the 19 years since the transition to black majority rule.

Much to the dismay of the workforce and the frustration of the government, South Africa’s mining industry is not expanding. Instead it’s contracting under the combined weight of oppressive regulation, high wage demands and the first signs of an industrial relations nightmare that led to clashes with police and the deaths of more than 30 striking workers on picket lines last year.

Anglo American outgoing chief executive Cynthia Carroll pulled no punches in her comments at Indaba, with the only criticism of her attack on the South African government being why didn’t she say something five years ago, rather than as she prepares to slip into a comfortable retirement.

Apart from tax, Ms Carroll pointed out that South Africa’s new Mineral and Petroleum Resources Development Amendment Bill was a farce, with clauses such as ministerial approval required for every transfer of a share in a mining company - which a law professor pointed out would kill the Johannesburg stock exchange and prevent the raising of fresh capital.

Another clause seeks to name certain minerals, such as coal, as strategic to the country’s future, a step that could lead to the banning of coal exports

The only beneficiary of such a coal-export ban would be rival mining countries such as Australia.

Back in the bottle

SHARE tips from your friendly stockbroker are probably not at risk, yet, but you can be sure the legal advisers to anyone in the finance industry suggesting an investment, or rating the chances of a company (or project) succeeding, are looking very closely at the US v Standard & Poor’s case launched last week.

At first glance the case is all about S&P’s alleged use of its ratings arm to assign low-risk levels on sub-prime mortgage funds in the expectation of winning more work from the investment banks that issued residential mortgage-backed securities.

If the case goes to trial, and there’s no guarantee of that as a settlement (and a large fine) would suit both parties rather than years moving from court-to-court, then it is highly likely that prosecutors will touch on the tricky question of whether most advice and stock ratings are guesswork, or written to win business from the company mentioned - and no-one wants the lid on the genie lifted again.

AS a final thought on Mining Indaba in Cape Town, but one that applies to all mining conferences: where were the miners?

A breakdown of delegates and exhibitors revealed more than 60 per cent came from services providers to the mining industry such as engineers, lawyers, banks and equipment manufacturers, which included a firm offering a fine line of razor wire - an essential adornment at all African mine sites.