The mining tax and public transport planning in Perth have one thing in common; they both show the danger of making policy on the run. 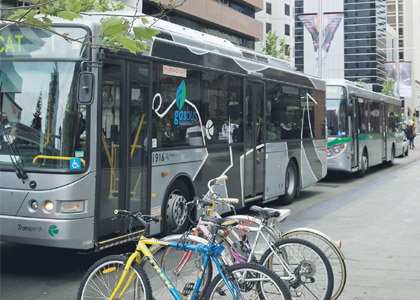 BIGGER, BETTER: The state campaign has to this point been dominated by a bidding war on public transport. Photo: Annaliese Frank

The mining tax and public transport planning in Perth have one thing in common; they both show the danger of making policy on the run.

LAST week’s revelation that the Minerals Resource Rent Tax has raised just $126 million in its first six months of operation has confirmed the huge gulf between what was promised and what has been delivered.

The MRRT was meant to deliver a taxation windfall, and unfortunately the projected windfall was built into the federal government’s spending plans.

That sort of reckless fiscal management is just one legacy of the mining tax.

The overall result is an outcome that doesn’t really please anybody, so it’s worth reflecting on how we got into this mess.

It all started when former Treasury secretary Ken Henry was commissioned to undertake a comprehensive review of the taxation system. Who remembers that?

Mr Henry delivered a bulky tome that contained a broad suite of tax reform options. His report should have been publicly released. so that it could form the basis for detailed debate and analysis about the various options.

Instead. former prime minister Kevin Rudd and Treasurer Wayne Swan sprung a surprise on the nation when they announced plans to implement just one of Mr Henry’s ideas - the Resources Super Profits Tax. Remember that?

The protests against the RSPT were one factor in the downfall of Mr Rudd, and his successor Julia Gillard came to power with a promise to fix the mess she had inherited.

It was in that feverish, hot-house environment that Ms Gillard sat down in closed-door meetings with three mining giants - BHP Billiton, Rio Tinto and Xstrata - and emerged in short time with a compromise, the MRRT.

Since then, commodity markets have been on their usual rollercoaster ride, mining industry profits have fluctuated wildly, and the early expectations for the MRRT have proved wide of the mark.

A deeper structural problem is the interaction between state government mining royalties and the MRRT, which mean that in net terms the mining tax has raised a lot less than $126 million.

So far, there is no sign of a solution to this problem.

The federal government’s bungled implementation of the MRRT has done a great disservice to the cause of tax reform.

It means the many level-headed people who support the concept of a profit-based tax in the mining industry face a much tougher road ahead.

The fact that a profit-based tax has applied to the petroleum industry for many years gets lost in this argument.

It also means the community will be particularly sceptical when a future government tries to garner support for tax reform.

Thankfully, Western Australia has been in much safer hands over the past few years, through the big increase in state debt under the Barnett government shows that genuine fiscal prudence is a rare thing.

It is easy for competing parties to fall into the trap of a bidding war, promising more spending, bigger tax cuts, more police, tougher sentencing laws, and so on.

In the context of the current campaign, it is public transport where a bidding war is under way.

Labor seems to have struck a chord in the community with its ambitious suburban rail plan; though the latest Newspoll published last weekend shows the opposition is still a considerable distance away from winning government.

Despite that, the government has come up with its own public transport initiatives, announcing some (like light rail) that have been on the drawing board for some time, and others (like an airport rail link) that most of us thought were unlikely to get priority treatment for many years to come.

Layered over that has been the worrying uncertainty about the cost of these projects.

The government and opposition have been trading blows over the likely cost of these commitments.

It’s safe to assume that nobody knows for sure, because the detailed planning that precedes large-scale infrastructure developments has not been completed - or in some cases even started.

It would be a terrible shame if the next state government blundered into office with public transport commitments that end up being off the mark, like the mining tax was for Labor in Canberra.