Some politicians are top-shelf material

It is interesting to see who in public life publishes their ideas, and why. 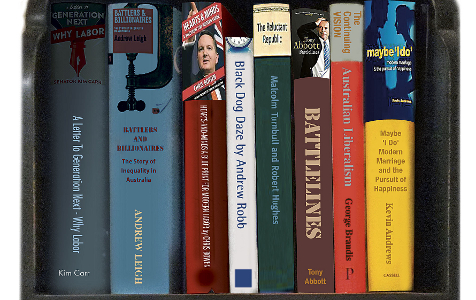 If the federal parliament were a bookshelf it would certainly be an interesting one, if not a little sparsely occupied.

Taken by the idea of what books would be on that shelf, I looked for parliamentarians that were authors to discover what it would really look like.

I am not suggesting this is a Christmas reading list, but it might take your fancy if you are politically inclined.

Perhaps it is a little obvious, but a good starting point would be Prime Minister Tony Abbott’s Battlelines. I attended the Perth launch of this book, which is part-autobiographical and part-political manifesto, a hybrid of the typical genres we see in politics. Usually the latter comes after the political career is over.

At the time Mr Abbott was not leader and I recall he outed himself on climate change. Clearly he had designs on the big job, which he took this year. Like the man himself, reviews online are polarised.

I suggest this book sits to the right of the shelf.

Other authors in the political manifesto genre are Attorney-General George Brandis, who jointly wrote a couple of books in the mid-1980s about liberalism and, on the Labor side, Andrew Leigh, Kim Carr and Chris Bowen who, intriguingly, all published books just before the election.

Mr Leigh wrote Battlers and Billionaires: the Story of Inequality in Australia; Mr Carr published A Letter to Generation Next: Why Labor; and Mr Bowen released Hearts and Minds: A Blueprint for Modern Labor. None have the leadership, but perhaps books are not about such immediacy.

Sitting in the centre of the bookshelf would be Malcolm Turnbull’s The Reluctant Republic, published in 1993, ahead of the battle he led and lost.

Perhaps not quite fitting the script are works by key Liberal leaders, Andrew Robb and Kevin Andrews.

The former, Black Dog Daze, is a personal account of battling depression while the latter is a conservative reflection on an institution, which is the subject of hot debate Maybe 'I do' - Modern Marriage and the Pursuit of Happiness. Mr Andrews also has a couple of books on the more political genre, but this is his latest and best known.

I have to note I could not find any Greens members who had authored books – perhaps that is more about saving trees than being bereft of ideas?

Andrew Forrest is definitely an enigma.

The self-made billionaire’s success defies almost all expectations, if we measured the environmental factors in his upbringing.

Raised on a remote Pilbara cattle station, speaking with a lisp, sent to boarding school at a young age, bullied and unable to settle down in high school – on the surface his childhood sounds more like a recipe for disaster.

Mr Forrest’s life has hardly been unblemished, and there are some who begrudge his earliest business failures. It also reveals what can be achieved by those with a single-minded purpose and something to strive for.

This early life is well documented in Andrew Burrell’s recently released unauthorised biography Twiggy: The High-stakes Life of Andrew Forrest, a book I have read just enough of to suggest it would make a worthwhile Christmas gift for anyone with a passing interest in Western Australia’s contemporary business scene or even for a lost youth looking for some inspiration to get on the straight and narrow.

The fact that it is unauthorised makes it all the more compelling. The author is a top-rate business journalist who had to get around the fact that many people would not speak to him, on the record at least, because he did not have Mr Forrest’s support for the project.

In fact, the book’s launch was completely overshadowed by the Forrest family’s $65 million gift to the state’s tertiary sector. That was a happy coincidence, wasn’t it?

I plan to read the rest of the book over my own break, so I regret I can’t offer a full review. Nevertheless, I am supportive of local authors, especially when their subject is part of local culture as well. Twiggy Forrest is certainly that.