The app’s co-founders hope it will change the way we get our food and drinks at big seated venues. 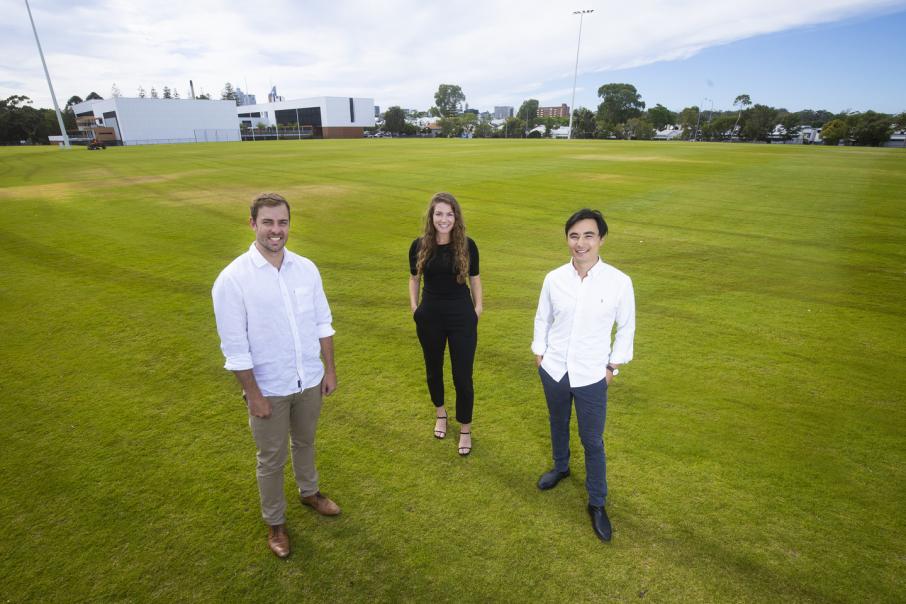 Some might think Snackr co-founders Matthew Lim, Cale Walsh, Grace Tate and Michael Ritchie came up with the idea for an in-seat food and beverage delivery service in the wake of COVID-19.

But it was missing Optus Stadium’s first ever streaker in 2018 while waiting in line for a beer during an ODI between Australia and England that got Messrs Lim and Walsh thinking of ways spectators could order food and drinks without skipping on action.

They pondered the idea the following week and later recruited friends, Ms Tate and Mr Ritchie, to co-develop Snackr.

The team trialled Snackr on a beta app with about 30 close associates during an AFL grand final before outsourcing its development to a company in Melbourne, which took about six months.

Changes and improvements were since carried out by Mr Ritchie, Snackr chief technology officer and director, who has more than a decade of experience in software development.

He was also confident interest in using delivery services at seated venues would remain in a post-COVID world.

“If people pay to see an event, they want to watch the event,” Mr Walsh said.

“You can end up waiting in line (for food and beverages) sometimes 30 to 40 minutes at a time, and people don’t want to do that.”

Seemingly, queues for food and drinks in stadiums are one of the biggest frustrations for spectators and has been a long-running issue.

In 2017, the Melbourne Cricket Ground became the first Australian venue to trial a US-owned crowd intelligence system, WaitTime, which enabled spectators to monitor the queues for a handful of vendors in real time.

The tech was later recognised in the 2019 Australian and New Zealand Sports Technology Awards.

The MCG has since continued the rollout of WaitTime, with the tech now installed across the entire stadium and used during both cricket and AFL seasons.

Though, WaitTime does not eliminate the potential for spectators to miss some big moments in sport, especially since queues will likely be shorter during gameplay.

Research conducted by hospitality-focused consultancy Oracle in 2016 found that 64 per cent of the 3,500 international sportsgoers surveyed (including 294 Aussie Rules fans) would “probably use” or “definitely use” a mobile app to order food and drinks from their seats and have it either delivered or sent to an express concession line.

And yet, less than 7 per cent said they had been able to use any app of this kind.

According to the report, The Fan Experience, spectators spend an average 30 minutes waiting in line for food and drinks at US stadiums and an average 18 minutes at international venues.

That’s time enough to miss a hat trick, header, hanger, or a streaker.

In another Oracle report, The Stadium of the Future, nearly 30 per cent of fans ranked being able to stay in their seat as the most important way to improve the food and beverage experience in stadiums. And that would also improve the overall game-day experience, according to 76 per cent of those surveyed.

Luckily for international sportsgoers, some notable apps have emerged in recent years, including Germany’s Bringsta and US-owned SEATSERVE. Even Spanish football team Valencia CF launched an in-seat delivery service for its fans in early 2020.

Mimu, an app spawned out of Perth and originally intended to be used in restaurants, is one of the many businesses that seized the moment during the lockdown to accommodate takeaway and delivery services.

Mr Jones also noted that although demand for services like Mimu had increased during the pandemic, a shift towards contactless ordering was a long time coming.

Mimu has since established a nationwide presence and is a preferred supplier of the Australian Hotels Association WA.

But for stadiums, Snackr remains a first for Australia.

Its pilot could not come at a better time, with many people already in favour of limited person-to-person contact.

Last month, Snackr scored an eight-game trial with Cricket Tasmania for every Big Bash League game held at Blundstone Arena, which started with a match between the Hobart Hurricanes and Sydney Sixers on December 10.

Mr Walsh said the trial was a success, with Snackr having received more than 670 downloads on both Apple iOS and Android devices so far.

Hurricanes Fans were first in line to use the service, receiving a complimentary snack for the first 100 orders, and free delivery.

“We started off pretty smoothly, the app ran exactly how we envisioned it to run,” Mr Walsh said.

“There were obviously a few kinks in it which was to be expected, but we iterated the app as we went along, and the process and logistics started to run a lot more smoothly.”

He said the Snackr team faced some external issues, including around the availability of stock in kitchens, though none had a significant impact on use of the app or overall customer experience.

But Mr Walsh said the introduction of 5G coverage should improve reception significantly, adding that larger venues were up to date with technological advancements.

He said the team was now working on redeveloping key functions of the app, with chief executive Mr Lim and director Ms Tate having recently resigned from their previous roles to work on Snackr full-time.

Mr Lim was a senior consultant at Paxon Group for nearly four years and Ms Tate a solicitor at Herbert Smith Freehills since 2018.

Improvements to the app include adding a collection point function, so that spectators can order food and drinks from multiple venues and collect their purchases from one location.

A collection-based model would eliminate delivery fees for customers and be a more scalable option at larger venues, Mr Walsh said.

That would suit roughly 32 per cent of Snackr’s Blundstone spectators who, according to a customer experience survey, said they were not willing to pay for delivery in future.

Contrastingly, about 45 per cent of customers said they would pay up to $2 in delivery fees while 18 per cent were willing to pay up to $4.

Mr Walsh said Snackr would first target a mix of revenue streams through fees, venue licensing, user data and advertising before agreeing to an outcome, which may vary between vendors since stadiums each had their own internal operations.

“Data is obviously key at the moment in every industry,” he said.

“Hopefully as we start to build our user base, we start to bring in a whole load of data, which gives venues and corporates a fair bit of information about what the best way to sell is and what the most efficient way to market is.”

The Snackr team is in talks with several Australian venues, which it hopes to partner with after completing about six months’ worth of improvements to the app.

Most of those stadiums are east coast-based, with Mr Walsh noting Western Australia’s strict coronavirus regulations and largely government-run venues.

“We’ll definitely have those conversations again,” he said.

“If Snackr is working well interstate, I’m sure (venues) will at least consider it over here.

“There’s a fair bit of work to go into it, but we’ve met goals in the timelines we’ve set.

“We’re really happy with how we’re going so far and if we can keep doing that, we’ll be in a pretty good spot in a few years.”