Smiths Beach up for sale... again 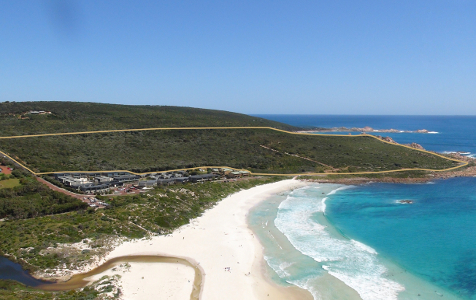 The development area at Smiths Beach, near Yallingup.

The development site at picturesque Smiths Beach near Yallingup has made its way back to the market – this time with subdivision planning approval.

The property was put on the market last October by its then owners, privately held firm Canal Rocks Pty Ltd, but despite receiving more than 100 enquiries the land remained unsold due to uncertainty surrounding development approval.

Selling agent Jones Lang La Salle said receivers and managers from KordaMentha had since been appointed to the project.

Importantly for the re-launched sale campaign, KordaMentha's Cliff Rocke said, the development had now gained subdivision approval through a mediation process at the State Administrative Tribunal.

Mr Rocke said the approval would allow for a range of options at Smiths Beach, including a hotel or resort development, tourism facilities or permanent residential dwellings.

Under the conditional subdivision approval, the proposed development would comprise a net development area of 19.11 hectares, with a proposed national park extension of 21.38ha.

“Incoming owners would have the option of including a high quality 3.34ha beach club style resort covering the lower portion of the property, while the tourist lots and residential component would occupy the most elevated portion of the site,” Jones Lang La Salle head of sales and investments Phil Fogliani said in a statement.

“The tourism lots could be developed as built-form serviced accommodation or alternatively a survey strata style beach house or bush block concept could be pursued.”

An expressions of interest campaign for the land will close in early October.