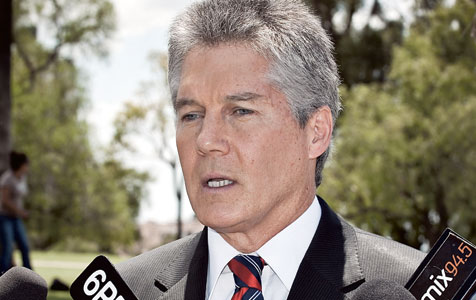 Defence Minister Stephen Smith is one of three federal Labor MPs tipped to lose their seat in September.

Defence Minister Stephen Smith says Labor is facing a tough election but predicts the party will retain all three of its seats at the upcoming federal election.

Internal polling leaked to The West Australian today indicated Labor would lose all of its seats to the coalition when voters go to the polls in September.

"I've seen references to opinion polling; I'm not sure (they're) right," Mr Smith told reporters in Perth this morning.

"I've been of the view all along that Labor will hang onto those three seats."

Speaking alongside Mr Smith at a visit to the Perth City Link project, Prime Minister Julia Gillard refused to comment on the polls.

"I won't be wasting my breath on any of that rumour and speculation," Ms Gillard said.

Ms Gillard also refused to comment on reports Labor powerbroker Bill Shorten had hit the phones to MPs this week to gauge support for her leadership, amid speculation of an 11th hour change to former prime minister and perennial contender Kevin Rudd.

The prime minister today announced $10 million in federal government funding towards a new $114 million sports and community centre, built for the Fremantle Dockers in Cockburn.

"Since 2007, we have increased annual infrastructure spending from $154 to $261 per Western Australian, to help support the state's growing population and future economic prosperity," she said.