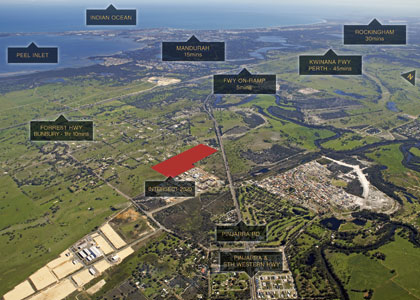 Land developer Avon Estates has launched its first major industrial development, with land at its Intersect 2020 estate near Pinjarra coming on to the market this month.

The estate, located off Pinjarra Road, will help to fill the projected shortfall of industrial land in the Peel region.

In its 2012 Economic and Employment Land Strategy, released earlier this year, the WA Planning Commission estimated that the total supply of developed industrial land in the Peel region, including Mandurah, was 304 hectares.

It projected that demand would increase to 910ha by 2031, leading to a major shortfall unless new land was opened up.

The WAPC has identified several sites with long-term potential for industrial development, including the West Pinjarra/Greenlands Road area, located between Pinjarra and the Forrest Highway.

Intersect 2020 is in the heart of the West Pinjarra area, which is also home to Landcorp’s 90ha Pinjarra Industrial Estate.

The Lancorp development was launched in 2007 and includes Byrnecut subsidiary, Murray Engineering, as its anchor tenant.

Intersect 2020 is pitched at smaller businesses, with plans for 120 fully serviced lots ranging from 1,216 square metres to 2,000sqm over future stages.

A spokesman for Avon Estates said the development was in response to the shortage of good quality industrial land, especially for smaller businesses.

Selling agent Robert Bower, of Property Associates Australia, said the location was perfect for businesses that needed a base to service the Peel and south-west regions and still have convenient access to Perth.

“We envisage the properties will suit a range of industries, including transport, manufacturing, distribution, construction and service providers,” Mr Bower said.

Its parent company, UK-based Avon Capital Estates, specialises in the management and investment in business and industrial parks.