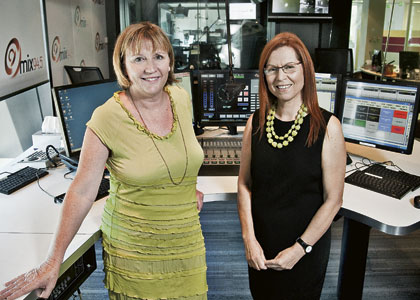 With few partnerships between large funding bodies, commercial radio stations and arts consultants in Western Australia, the new My City program on Southern Cross Austereo-owned Mix 94.5 is carving a new path to promote arts and culture events across the state.

Arts consultant Paula Silbert’s passion for delivering quality advertising and promotion opportunities to arts organisations that can’t afford a slot on a large commercial radio station has driven her to return to the airwaves with a project backed by Lotterywest.

She is a firm believer in the role the arts play in the community and says they are no longer typified by large, big-budget productions.

In her four 30-second radio timeslots across the weekend she hopes to deliver the right information to listeners of Mix 94.5, which has a weekly audience of about 450,000.

“Perth doesn’t have a dullness problem, it has an information problem,” Ms Silbert said.

“The service I am providing is about taking arts events to what we know is a media outlet that has immense coverage and is part of Western Australia now.”

Arts events like Mandurah’s Little Theatre Company’s production of Peter Pan and Grace Barbe and Zarm in concert in Greenwood were promoted last weekend and, while some may deem them obscure, Ms Silbert sees it differently, showing her belief in how promotion can make a difference.

She believes they are only recognised as obscure because there is no vehicle to promote them.

My City should not be mistaken for a charitable project though.

Southern Cross Austereo Perth general manager Linda Wayman notes the strategic interplay of the My City project for Mix 94.5 and, alongside Ms Silbert’s hearty passion for the arts, is her commercial interest in her business, Paula Silbert Arts Consultancy.

Mix 94.5’s charter was centred on delivering locally focused content to its audience and Ms Wayman said research coming out of the industry in recent years had shown that having localised content created growth in radio, hence the focus on supporting events like Skyworks and arts through My City.

“We are a publicly listed company, so there is responsibility to our shareholders to do the best we can, but radio is about community and we sponsor a lot of not for profit events,” she said.

“We are commercial, so we always have to balance all of that out, but we have a great relationship with a lot of the arts organisations around town. We try to help and support them when we can and we think radio is a great tool for them to use as a call to action.

“We have a great distribution channel, our listeners go across a whole breadth of the socio-economic bands and our listeners have a huge variety of interests.”

Lotterywest chief executive Jan Stewart explained that the project was not funded by a conventional Lotterywest grant, because Ms Silbert was not eligible as a commercial operator, but that a unique arrangement was developed to sponsor the program given its promotional value for arts and culture in WA.

Ms Stewart said the significant dollars returned to arts in WA through Lotterywest, $12.5 million to the Department of Culture and the Arts alone in one year, bypassed marketing and it was important to look to facilitating promotion for the arts in the state.

“We support the arts, we would like to see them well promoted and we hope there is marketing value for us incidentally as part of supporting the arts,” she said.